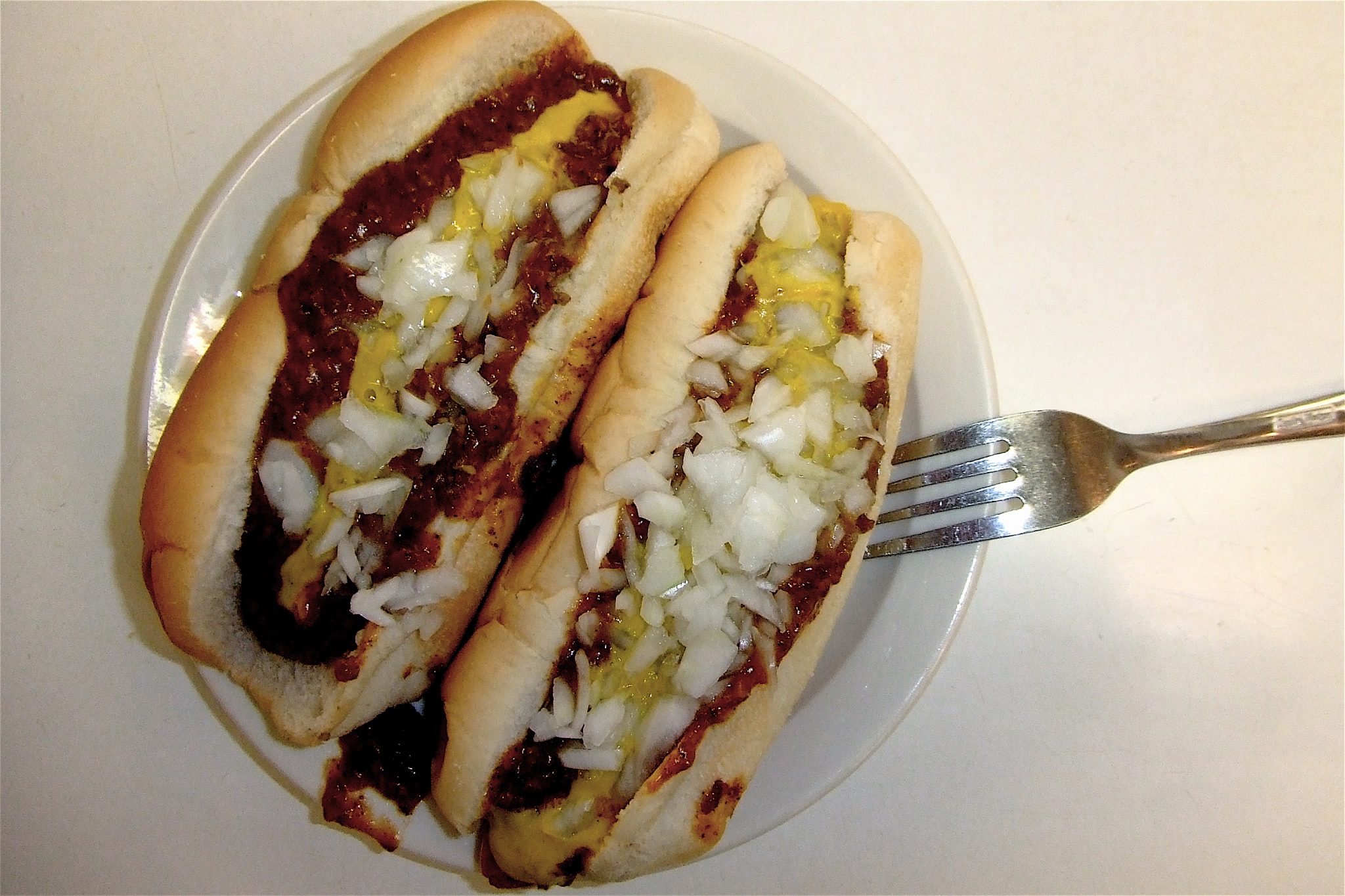 For years there has been debate over which Coney offers Detroiter’s the best hot dog, American Coney Island or Lafayette Coney Island? Today, the argument plays itself out on a national stage of late-to-the-party magazines and cable TV food shows.

Recently, Man vs. Food explored the streets of Detroit taking a bite out of Slow’s BBQ pork triple threat sandwich, before host Adam Richman, in an effort to resolve our region’s longest running rivalry, turned his sights on American and Lafayette. Good spot but in the end Richman tossed TV land a curve, leaving audiences wanting, from the kind of edge-of-the-seat cliffhanger not seen since J.R. was shot in Dallas.

When I was kid, Lafayette was the only way to go. Our family was a Lafayette family, simple as that. It was there that my father introduced my brother and I to the words two up with everything, and they stuck. We never ordered them any other way. In fact, I’m not even sure we knew two up with everything was just one way to order Conies. For us, it was the name of a dish, like Osso Bucco or Crème Brulee.

We loved the action inside Lafayette; the hustle and bustle of a vibrant downtown working establishment, people yelling orders over one another, the clack of cups and plates bouncing off tiled walls, bells ringing every time someone entered or left the building. Dad handed down stories of his glory days at Lafayette and taught us how not to embarrass ourselves by ordering French fries or ketchup – something Lafayette once stood staunchly against. We listened, we ate, and that was that.

The first time I noticed there was another Coney, sitting alongside Lafayette, my father was leading me by the hand as we crossed the street in the direction of our car and away from our pilgrimage. A guy in a white apron wearing yellow stains on the front was yelling at us in broken English, gesturing with his hands to enter the door he held open.

“What’s that?” I asked, looking back and over my shoulder.

“What’s what,” dad said. And, he meant it. He never broke stride. He never looked back. Try as the guy in the apron might he would for me remain an enigma.

Years later (and, I forget the exact details of the situation) my brother came home with tales of chili fries in a place called American Coney Island. I listened with wonder as Nick described his discovery.

“They served two up with everythings, just like Lafayette,” Nick said. “They had loose burgers too, and windows that wrapped around the entire building. And, they had ketchup.”

What was this place?

“Is it better than Lafayette?” I asked.

I took his in words, thought a moment, then left the room.

Pretty soon I overheard reports everywhere from people who had recently been to American Coney. Chili fries, everything was suddenly chili fries. Detroit was becoming a different place. Then word hit the street that Lafayette was doing chili fries too. I thought of telling my father but decided against it. He wouldn’t understand.

I have now been to American and Lafayette many times since and love them both. As it turns out, American Coney Island is one of the oldest family owned and operated businesses in downtown Detroit. Established in 1917 by Constantine Keros, it was actually his brother, William, who opened Lafayette. Both have been operating side-by-side, seven days a week, 24 hours a day, for over 75 years. But, it is a third generation Keros, Grace Keros, who is most responsible for the recent explosion of American Coney Island.

In 1989, Ms. Keros expanded American into the corner building, giving the Coney one of the best views in the city, and she has maintained only the highest quality ingredients, using Dearborn hotdogs, 100% ground beef loose burgers, while continuing with Detroit Chili, a Keros family recipe.

Lafayette, on the other hand, while no longer owned by a member of the Keros family, maintains much of the same feel it did when I was young. They use pork dogs, found in Eastern Market, National Chili and Spanish onions, which give the Coney its distinctive sweet flavor.

Recently, my brother and I stepped into both American and Lafayette Coney Islands in order to compare and contrast the two offerings. We decided, having watched an episode of Food Wars, not to make the same two blunders that show did during its competition. For one, we did not do a ‘blind’ taste test, believing firmly in the sense of sight, as it relates to our subject. Two, and perhaps more importantly, we decided to rate the Coneys only after eating them whole, rather than a single bite, as we feel one comes closer to the truth when confronting a ‘real life’ situation – who eats a single bite of a Coney?

First up, Lafayette. Having stopped in for lunch, we were not surprised to feel immediately at home. A handful of people ate quietly inside and we could hear the ventilation system humming and the appliances buzzing, voices softly echoing off the walls. We each ordered one up with everything and one loose with everything.

Our meal came quick, warm and went down smooth. Both the Coney and the loose have a faint yet certain sweetness to them that, taken early in the day or as an after hour romp, lend the experience a modest degree of naughtiness. We were stealing away to enjoy comfort food and, from the look of the smiling two couples seated nearby, so was everybody else. Lafayette is a real treat. We noted our findings and paid our bill. One up with everything; $2.40, One loose with everything; $2.80.

After giving ourselves the week to cleanse the palette, Nick and I stepped into American to complete our study. The interior is louder than Lafayette, bursting with red, white and blue, boasting a ‘Wall of Fame’ and offering wrap around views of the city – clearly, the more commercial of the two enterprises and, perhaps, the more popular. Usually, traits to give us pause.

Again, we each order one up with everything and one loose with everything. Again, our meal comes quick and warm. But, upon first bite we immediately notice a distinct difference. American coneys are meaty, bold and lend themselves more to a feeling of eating a substantial meal. Well drained of any liquid, firm and satisfying, and possessing just the right amount of zing – thanks to Dearborn mustard – with almost zero guilt attached, American felt like quality. Our decision to rate whole coneys proves to be a good choice. We note our findings and pay our bill. One up with everything; $2.36, One loose with everything; $3.15.

After a few days of reflection, Nick and I compared notes. For us, it was clear that one Coney felt more like a snack, like eating good donuts for breakfast, while the other was more of a savory meal. While they may be different both were perfect.

We also decided Adam Richman may have had a point: What’s the sense of determining which of these two Detroit landmarks is best? They exist to make one another better.

The fact is both American and Lafayette are ours.

We would do well to enjoy them.