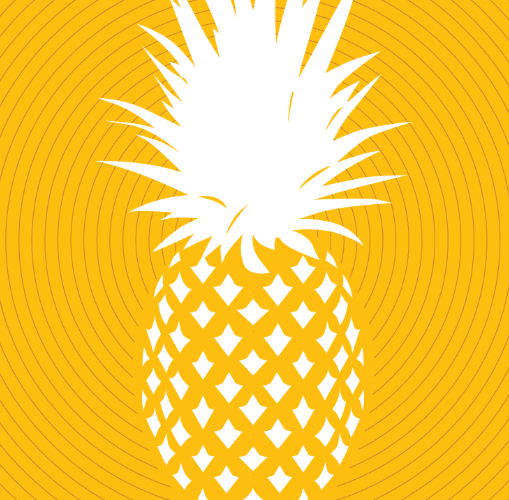 Pineapples are traditionally a welcome gift in the tropics. And so, with the summer solstice upon us, we welcome you and yours to both The Metropolitan and to Detroit City, USA!

It seems one Mr. Christopher Columbus brought this native fruit of South America back to Europe in November 1493, as one of the exotic prizes of the New World. Oh, how the Europeans must have joyed!

The pineapple, or “anana”, as the native Carib Indians called it, was enjoyed for its intense sweetness, and was used regularly in Indian feasts, as well as those rites regarding tribal affirmation. Lest we begrudge signore Columbus for exporting the “excellent fruit” from Guadeloupe to España however, we would do well in remembering that the native people of the Caribbean islands had first done the same when they removed the “princess of fruits” from Brazil and Paraguay, by way of dugout canoes.

According to historian Hoag Levins, Columbus stumbled upon a deserted Carib village, where “amidst parrot-flecked jungle foliage and wooden pillars spiraled with serpent carvings he and his crew came upon cook pots filled with human body parts”. Not far off were gathered various fruits and vegetables, including the subject of our tale. The sailors ate the fruit and named it Pineapple!

American colonists began importing ananas comosus from the islands and it was soon considered significant for a host to procure pineapple for his guests. Sea captains, upon returning from their many adventures, would place a pineapple at their door as a symbol of safe return. Women, waiting patiently for their swashbuckler would often offer pineapple as welcome. According to Dole Plantation, “no one knows when the first pineapple, or “halakahiki” made its way to Hawaii.” But, Spanish adventurer, Francisco de Paula Marin, a trusted advisor to Hawaiian king, Kamehemeha the Great, raised pineapples in the early 1800s. It wasn’t until James Drummond Dole hit the island in 1901, however, and transformed an American symbol of welcome into an exotic household staple.