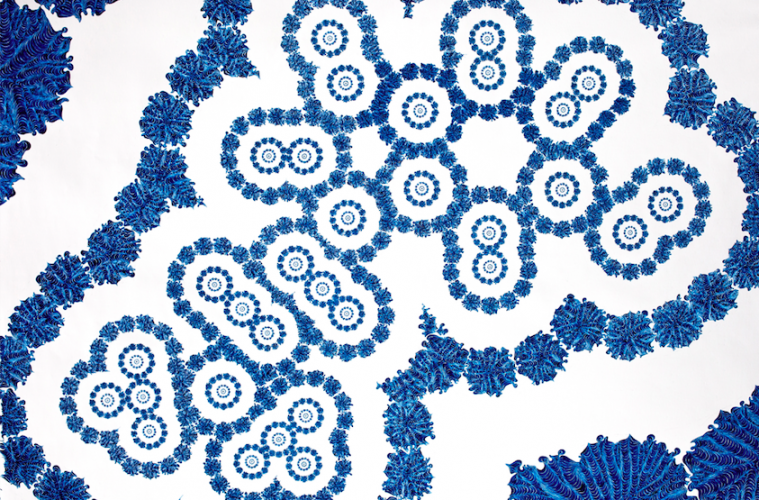 Library Street Collective presents Position, an exhibition of new paintings by Kelsey Brookes on view at 1260 Library Street in Detroit. Position is the gallery’s second solo exhibition with the artist.

Position is a synthesis of artistic and empirical modes of creativity. In his practice, Brookes, formerly a microbiologist, challenges the assumptions that place art and science on opposing poles of a creative continuum.

Brookes’ paintings are vibrantly colorful, feature intricate line work and hearken to the psychedelic aesthetic that emerged from the counterculture in the late 1960s. In Position, Brookes furthers his meditative explorations of molecular mapping (previously a point of departure for works referencing psychoactive substances) with a new series on neurotoxins.

Bufotine (2017) appears to scintillate, a lively effect that Brookes produces by methodically plotting the structure of his subject molecules on canvas.

Additionally, Position introduces Brookes’ investigations of the Fibonacci sequence and the related notion of the “Golden Ratio,” which he uses to generate a pattern in which rings of roundish, biomorphic components multiply in size as they approach the edge of a circular canvas, as in Recursion (White on Orange) (2017).

Kelsey Brookes states, “The artistic and aesthetic values I’d been practicing as an artist had always seemed in opposition to my scientific way of understanding, until this body of work.”