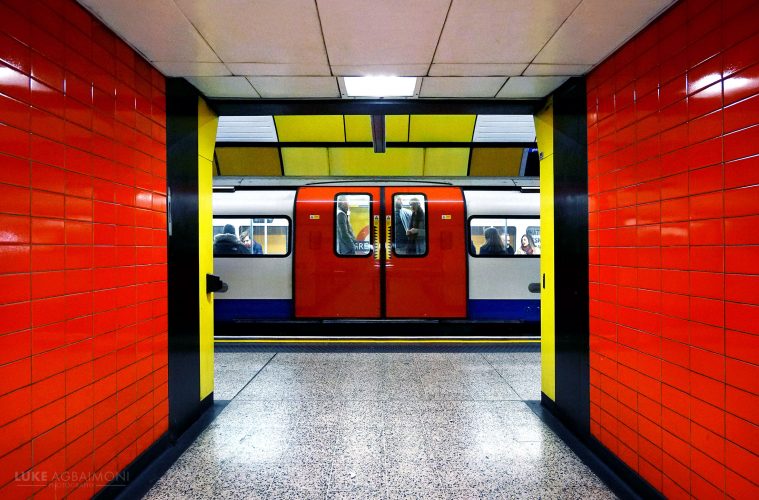 The Underground is the backbone of the city of London, a network of shared experiences and visual memories, a part of its identity. The Tube Mapper London photography project follows the journey of photographer Luke Agbaimoni , as he captures images near and around all London Underground, Overground and DLR Stations.

The project began when Agbaimoni’s first child was born. At that time Luke enjoyed photographing nightscapes and sunsets, but he soon worried he would no longer have free time for creative photography. After some thought and planning, Agbaimoni conceived The Tube Mapper Project, as it fit within his commute to work and home.

I discovered Agbaimoni’s work one morning over coffee. The first photo in my feed was ‘Mondrian Underground Green Park’, seen as our featured image at the top of the page. Colorful, powerful, symmetrical, the photograph forced me to appreciate the architecture and design of the Underground, but it also reminded me of a passage from “You Can’t Go Home Again” by author Thomas Wolfe – something about the difference between being on a train and watching one go by – that resulted in the re-examination of that perspective through the different stages of my life. And, of course, the Stanley Kubrick inspired composition is always something to admire.

“I love it when doors align at the end of a tunnel,” Agbaimoni says of his image. “The red tiles make this the ideal location to capture the moment. I froze a moving train with a fast shutter, it took ages to get it centered. The result looks like a Mondrian painting.

The Tube Mapper project has been building for over 4 years. Agbaimoni tries to discover something special at each station and will often visit locations multiple times, under different conditions. Some shots may work on a nice sunny day, whereas others will require a rainy evening for the artist to get his “shot”. 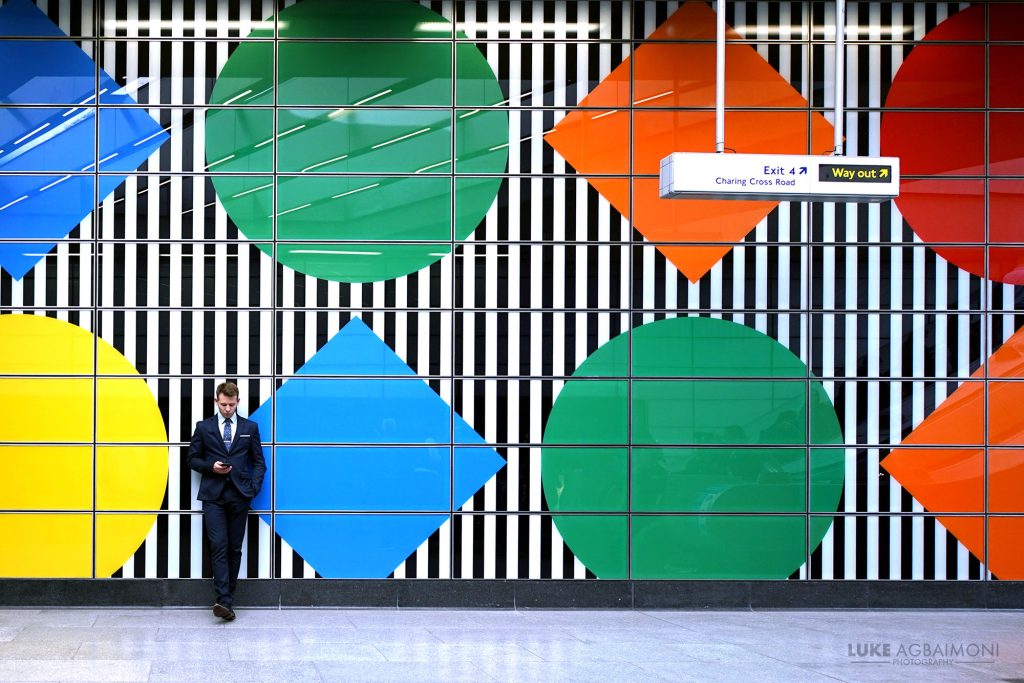 “The Underground is a micro world in the city of London,” says Agbaimoni. “In general Londoners don’t interact with each other. We are masters of avoiding eye contact and unnecessary conversations. However, during this project I have discovered that we are kinder, warmer, and more welcoming than our initial façade.”

Agbaimoni often engages with people on his journey while he attempts to capture every station and is amazed by how much the tube network means to the people of the city. He’s learned commuters favourite views, their love of the architecture, and the many memories they hold at different stations. But, the project has also revealed other aspects of commuters lives.

“The tube network is a visual window into what we might assume would be the mundane activity of commuting across the city,” says Agbaimoni. “During our journeys we have a quick glimpse into other people’s lives as our paths briefly intersect. We also journey through time, experiencing century old architecture, and witness its contrast with newer structures. So just like ourselves, the underground is constantly growing and adapting to it’s forever changing surroundings.”

The London Underground railway opened in January 1863 and ran between Paddington and Farringdon. It was the first underground in the world. Today, it serves 270 stations, operates eleven lines, and runs 402 kilometers (250 miles) in length.

“There is something special and timeless about walking through some of the older stations,” says Agbaimoni. “When I was young I remember the Jubilee line extension being built and the excitement of using a new station. Overall, the feeling of the underground is that it is timeless. The tube network is like a public access museum that celebrates the old and the new.” 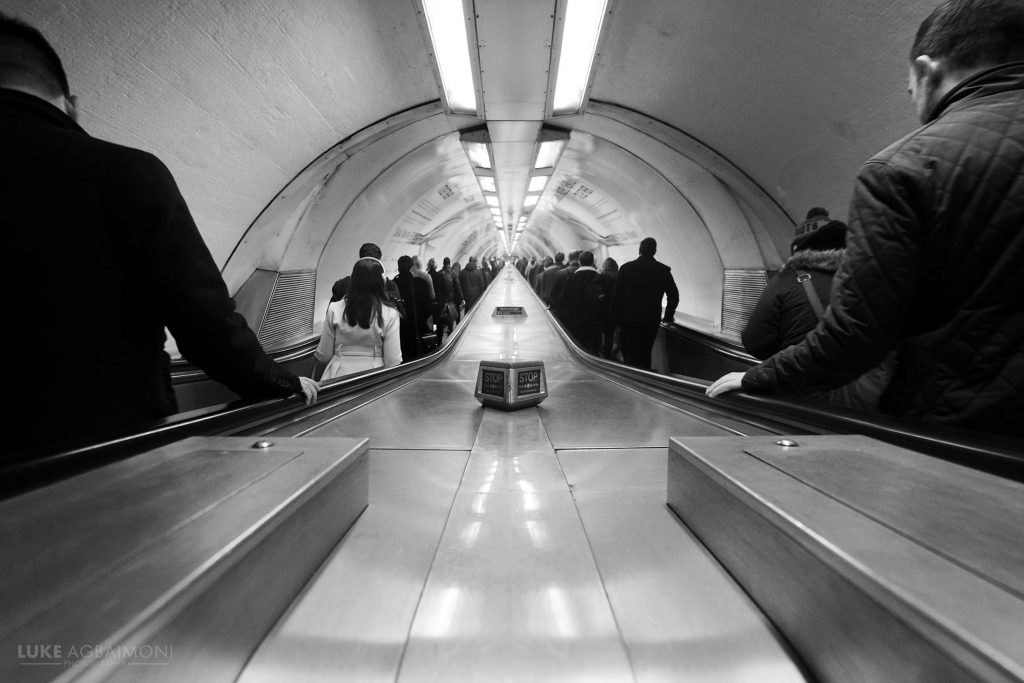 The photographer keeps a camera on his person regularly so that he can capture moments as they unfold. In this way he is documenting activity as it happens. On occasion, however, Agbaimoni will schedule with interesting people or groups to capture them on their journey – like the time he intersected a Spiderman cosplay meet up at Tower Hill station.

St. Paul’s Underground Station is where Agbaimoni first became obsessed with the symmetry of The Tubes. He cites this stop as one of the better examples of the system. And, while Agbaimoni’s favorite stops change frequently he would say that Bank / Monument currently has his attention.

“It’s massive and is effectively two joined stations. It has many cool pedestrian tunnels and is only one of two stations to have travelators.” 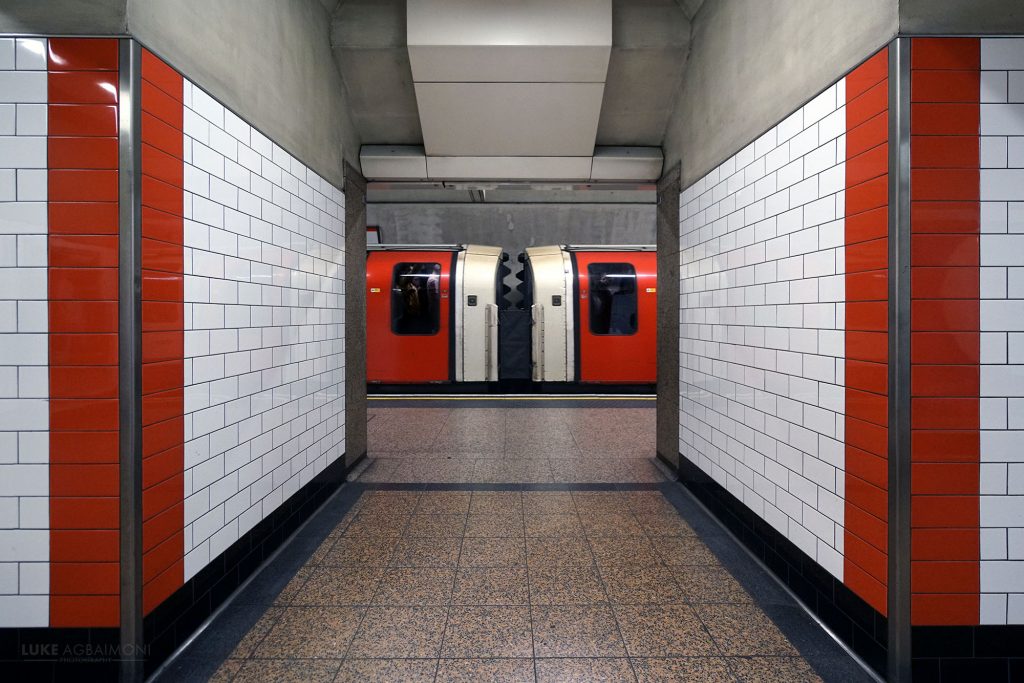 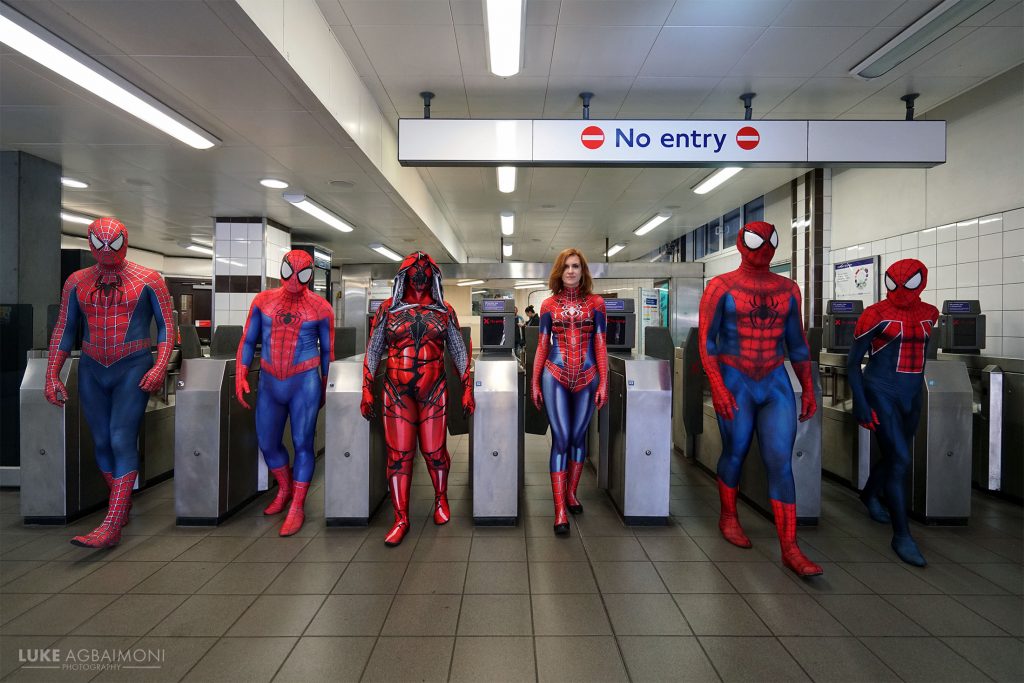 The photographer has a book coming out October 2020 entitled “The Tube Mapper Project: Capturing Moments on the London Underground” that focuses on themes such as symmetry and reflections, with poetry from a selection of poets to support Luke Agbaimoni’s brilliant images.