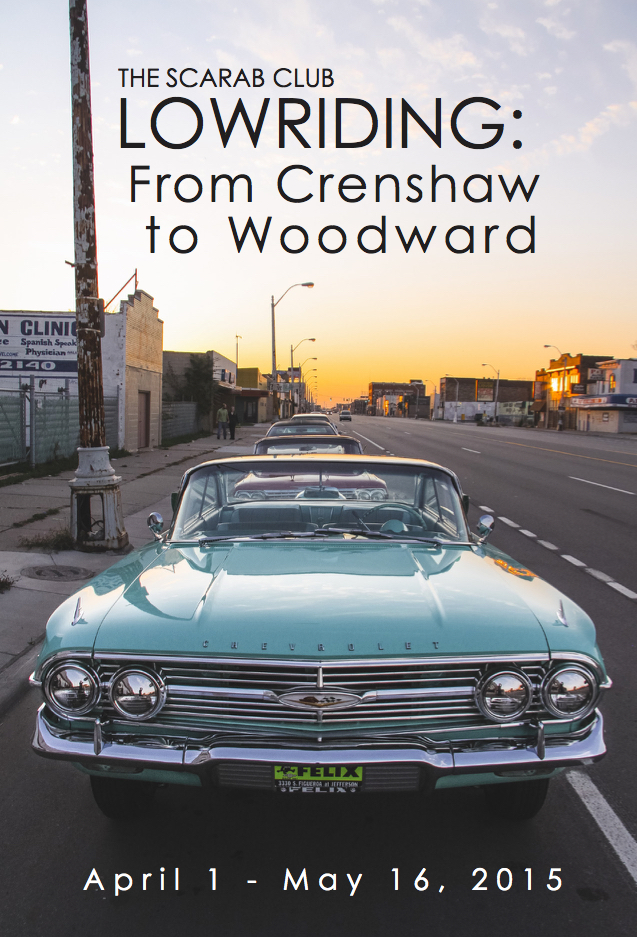 Lowriding: From Crenshaw to Woodward

LOWRIDING: From Crenshaw to Woodward

A significant aspect of Detroit history is the role its automotive industry played in putting the world on wheels. Lowrider culture emerged in Los Angeles and migrated back to Detroit. The Scarab Club exhibition showcases Lowrider cars and bicycles. The all-media exhibition includes photographs, paintings, installations and complementary programming highlighting the cultural impact of Lowriders.

Informal gallery talk with the curator of LOWRIDING: From Crenshaw to Woodward on Wednesday, April 29th, 6 pm.

Erik Paul Howard is a photographer as well as co-founder of Expressions and Young  Nation in southwest Detroit.  He combines his passion for youth and community development  with his love of photography.  Using group activities such as lowriding and street art as a mentoring tool, Erik has been able to reach out to young people in the community of southwest Detroit.  Erik’s photography documents his personal relationships and interactions in communities. It captures the excitement of people in their process of self discovery, development, and life experiences.

My passions are people, community, culture, and creative processes.  I have a curiosity and admiration for people as individuals and in their environments with others and believe these both are critical to a photographer’s ability to capture stories.  This is true whether shooting a formal event or creating documentary works.

My life’s work is fed by continual observations and explorations of culture, otherness, purpose, roles, power, leadership, relationships, inspiration, and faith.  The images produced are my reflections on these topics.  Continuing to learn and share through my photography is a reciprocal process that allows me to give and to receive through my work.  In working with communities or with clients I am given this opportunity.

Chair for the evening is: John Sotir

Join architectural historian, James W. Tottis as he traces the meteoric rise of the American vertical style (the skyscraper) in Detroit; from its nascent phase in 1890 with Harry Edbrooke’s Hammond Building to the sudden and abrupt halt of construction in 1930 with Donaldson and Meier’s David Stott Building.  During this time, Detroit was a global leader, behind New York and Chicago, in the growth and development of the American vertical style.  Nationally recognized architects, like Daniel Burnham, and local talents, including Wirt Rowland, contributed to the creation of the Detroit skyline.  This legacy, still mostly intact, documents Detroit’s place as a national leader in pre-World War II skyscrapers.  The exploration will virtually wind through the streets and into the very structures that graced the city during early years of the skyscraper – arguably America’s greatest contribution to architecture.