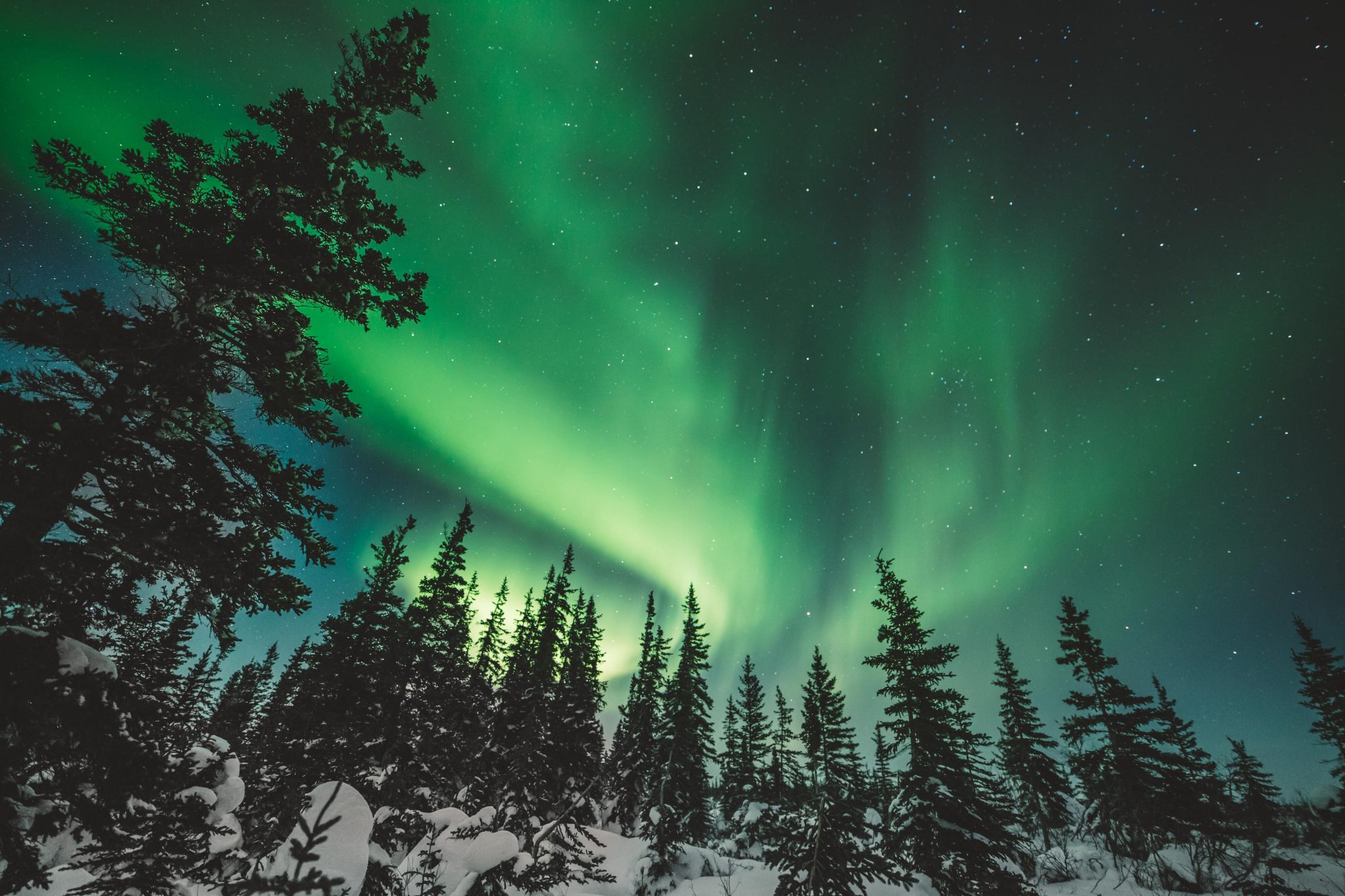 Manitoba, Canada | Under the Northern Lights

Manitoba is Canada’s sixth-largest province, has more than 100,000 lakes and waterways and a population of about 1.2 million. It is bordered on the north by Nunavut Territory, on the west by Saskatchewan, on the east by Ontario and on the south by North Dakota and Minnesota.

Part of my bucket list is to swim all of Manitoba’s lakes. So far, I’ve swum zero.

But, I have been to Winnipeg.

While considered one of Canada’s Prairie provinces, Manitoba actually has three distinct geographical zones: the agricultural triangle in the south; the sub-arctic tundra in the far north; and the predominant Precambrian Shield with its rugged terrain and thousands of pristine lakes. Winnipeg is the capital and largest city in the province while Churchill is a town on the Hudson Bay renowned for polar bear and beluga whale sightings. But, it is also known by the heartiest among us as the place to be for Northern Lights viewings.

The northern lights, also known as the aurora borealis, is a illumination that fills the northern hemisphere with vibrant, dancing hues of blue, green and violet. In the province of Manitoba travelers can view the lights 300 days out of the year. However, prime viewing conditions are visible in Churchill from January through March, also known as the Canadian subarctic, when overnight temperatures can reach well below 4° Fahrenheit. This small northern town can only be accessed by plane or train and offers travelers uniquely secluded and environmentally conscious experiences right on the tundra. 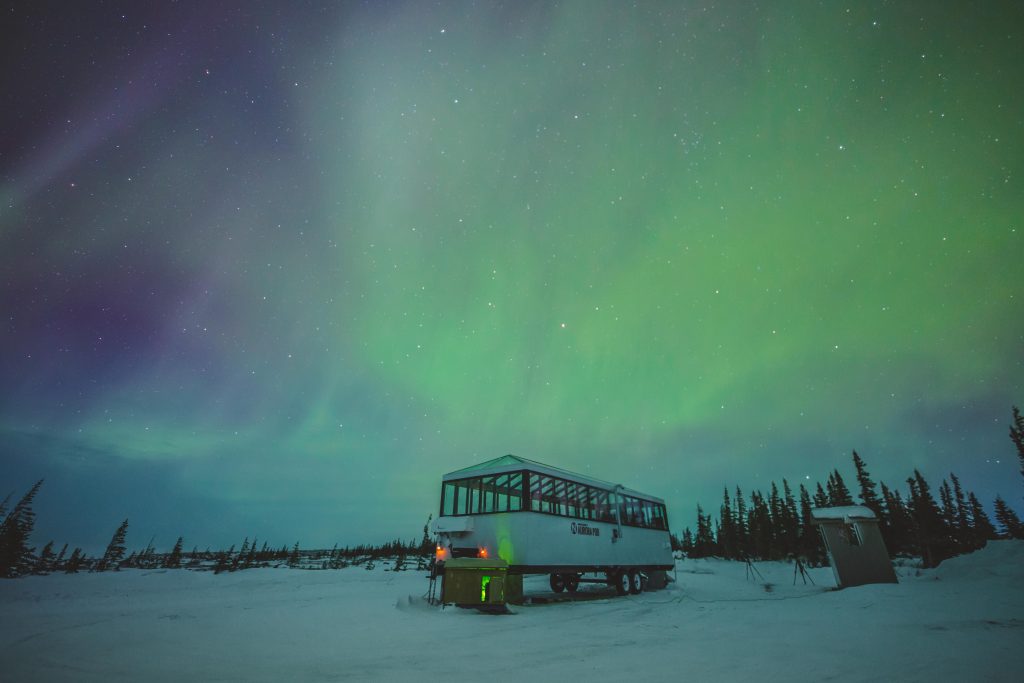 The all terrain Tundra Buggy

A wonder of the natural world, the northern lights are a result of charged particles from the earth’s atmosphere colliding with oxygen and nitrogen. The best viewing conditions are located within the auroral oval and require clear weather and an absence of moon or artificial light sources.

For travelers looking to learn while gazing at the night sky, the Churchill Northern Studies Centre offers an interesting option to view the display alongside scientists researching the phenomenon, subarctic and its wildlife. At nightfall, the lights of the centre are turned off and guests head to the heated viewing dome at the top of the facility. Shared rooms are available and offer easy access to staff and volunteers for questions and tips on discovering the tundra, like “Should I finish my bearded seal pup sandwich before I go out to play with the polar bears?”

In addition, Churchill Northern Studies Centre offers funding opportunities for science and research. Some of the recent projects include, Polar bear ecology and habitat use, Beluga distribution relative to ship/boat activity in the Churchill River Estuary, and Epigenetic response to conductivity in Daphnia pulex.

While The Metropolitan has not yet been notified regarding its proposed study, On the affects of Canadian whiskey and Manitoban cannabis relative to the Aurora Oval intensity experienced by French Canadian women exposed to a Rising Vapor Column we remain optimistic. 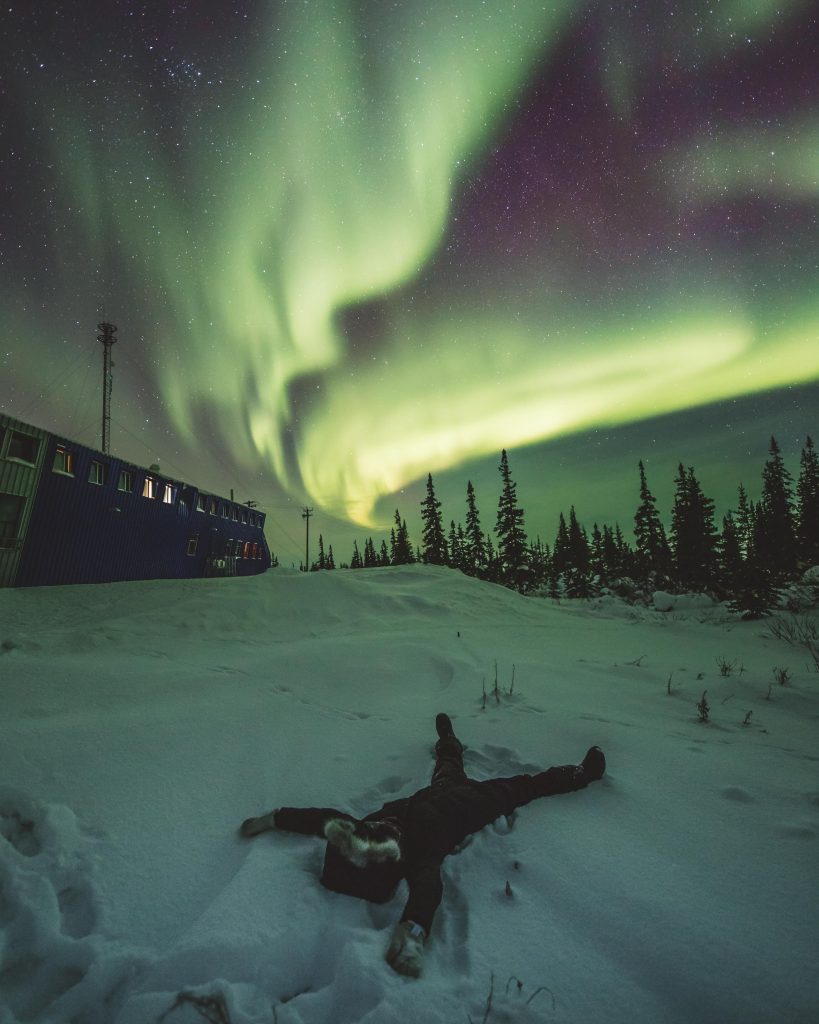 A snow angel beneath the Aurora Borealis

Frontiers North Adventures, a family-owned company operating in Canada’s north for three decades, provides two excursions. The first, an eight-day immersive experience, Northern Lights and Winter Nights Adventure, has guests observing the lights from the company’s all-terrain “Tundra Buggy” at night and taking part in winter activities such as dog sledding, snowshoeing and photography during the day. For those seeking a culinary experience, set under the stars, there is a three-day trip featuring a night at Dan’s Diner. This pop-up restaurant on the ice serves a curated, multi-course menu featuring regional fare by Canadian Chef Jared Fossen, while the northern lights provide the entertainment above.

If you’re looking to capture some of the best photos of the northern lights, Nanuk Operations offers the “Nights under Lights” experience. Here, guests get the chance to spend their trip tucked away in the boreal forest in a rustic heated yurt, a round tent with a 6-foot ceiling dome. Adventurers can set up camera equipment on the yurt’s wrap-around deck, offering a front-row seat to the natural light show right under the aurora oval.

With winter skies providing the clearest and most awe-inspiring nightly shows, Churchill, Manitoba experiences one of the heaviest concentrations of auroral activity in the world. Though peak viewing times for the aurora borealis are between January and March the lights are visible for up to 300 nights of the year in Manitoba’s northern region.