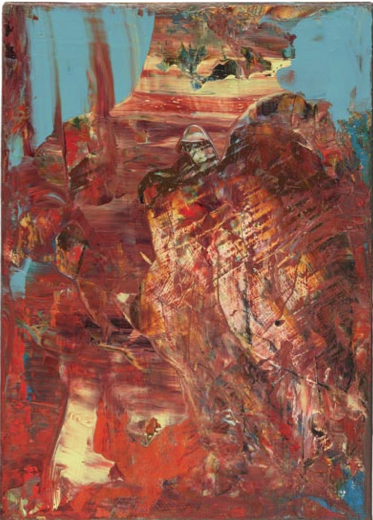 On a cold day in November, an artist from Michigan displayed his work on the steps of the Metropolitan Museum in New York City. Within 45 minutes he sold three pieces, one to actor Kate Blanchett, another to actor Josh Lucas and a third to Society gal, and patron of the arts, Ginny Williams.

Today, Richard Schemm is in Manhattan, staying at the Jane Hotel, where he is engaged in an invitation, by appointment only exhibition from within his suite. Occasionally, he slips out of his room and heads to the Bohemian style lounge – that he describes as an upscale Grande Ballroom – for a slow martini.

While he sips cocktails, Schemm’s work is being catalogued in the library of the Museum of Modern Art. The curator of painting and sculpture, Ann Temkin, received a portfolio of Schemm and within one week determined she would begin to catalogue, presenting prices to the Museum for acquisition.

“It’s not that poverty is so bad, it’s just that it takes up so much of your time.”   ~ de Kooning

“I’m just happy that I survived my bouts with mental illness and that my relationship with Pat (Schemm’s love interest, confidant and most ardent supporter) has lasted,” says the artist. “Years of working to gain recognition has taken its toll and the business of being an artist takes a good deal of time.”

Schemm lives just outside of Traverse City, where he enjoys keeping a low profile, lounging in his yurt, and working from his studio. His day begins with coffee and raw canvas, doing what he refers to as ‘calisthenics’. He produces layers, many layers, letting the paint dry before going over it again, smearing it off until it’s almost all gone – Palimpsest – the effort of the marks of where the old shows through. In this way, he believes his work cannot be reproduced. “Just too many layers.”

“Painting is half looking and half painting, but mostly it’s seeing.” ~Richard Schemm

“I am not fascinated with ritualistic rules” Schemm explains. “A few nights ago, I awoke at midnight and made nine paintings through till dawn. Not all of them were finished but three were great”, reveals Schemm. “The rest will be.”

Always painting to music – artists like Diana Crawl, Kurt Ellington, Pat Matheny and Kate McGarry – Schemm begins “out of a need that turns into an urgency” and then it falls into place, from his play with automotive tools, brushes, and gloves: “Pretty much I’m like a caveman when I paint – sticks and stones . . .”

That symbiotic relationship between music and art met at a recent performance at Joe’s Pub (NYC) when Grammy nominated jazz singer, Kate McGarry, brought Richard on stage and introduced him to the crowd, stating that what she “thinks about while singing is what [Schemm] he thinks about while painting.”

Not bad for a Michigan boy who still prefers to drive his “little Toyota Yaris” all the way to the Big Apple to conduct meetings with dealers from America, Amsterdam or regions unknown.  And, much like the image in The Wanderer (George Grosz, 1938), whom Schemm regards as a “brother in paint”, Richard Schemm will continue heading into the deep expanse of a colorful unknown.