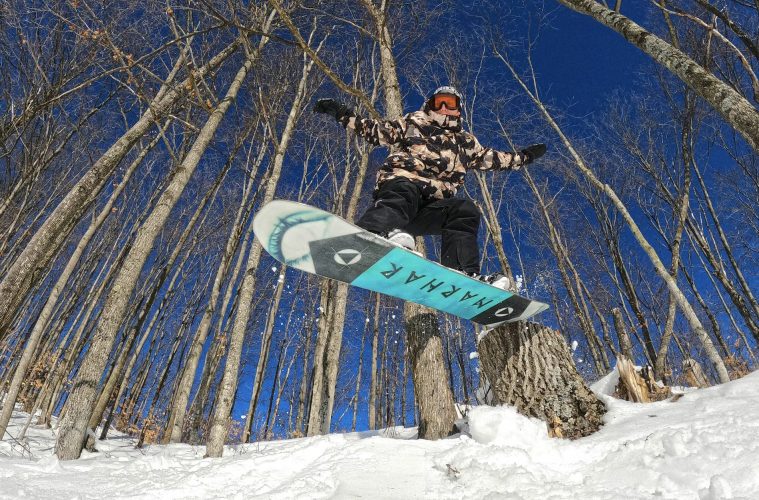 According to a liftie I know, the mountain report looks sick in northern Michigan for springtime boarders and skiers. And, after a year or two stuffed inside our homes, consuming nothing but noise online, it’s good to get out-of-doors for some fresh air, sun, and a whole lot of snow!

So, here are a few of my picks for getting the most out of the fairest season of them all.

See you at the bottom!

The Highlands at Harbor Springs

Boasting the highest vertical drop in Lower Michigan, like 552 ft, with a base elevation of like 773 ft, the Highlands has been one of Michigan’s sickest desties for downhill, snowboarding and winter sports since it opened in 1963. 8 lifts rush skiers to a summit reaching 1,325 ft, while 2 Magic Carpets are ready to assist snow bunnies and noobs.

Like 34% of the runs are expert, so that’s cool. 29% are intermediate, which is also cool. Leaving like 37% for Herbs. The longest run is North Peak Pass, which comes in at like 1.25 miles, and is pretty cool. But, I usually spend my time on the bumps. 4 terrain parks including a skier/boarder cross course and rail yard, and a 13-foot Halfpipe, make up the 430 ski acres, the largest area in like all of the Mitten.

Caught a Jerry bombing a chute the other day and it still cracks me up. Dude caught an edge and face planted

The Highlands has night skiing, a tube park, 35 km of cross-country, like 8 kms of snowshoeing trails, and a lot of other stuff. Apres ski is sweet, with a new Enchanted Trail, heated pool, hot tubs, and there are always a few bunnies at Slopeside Lounge. 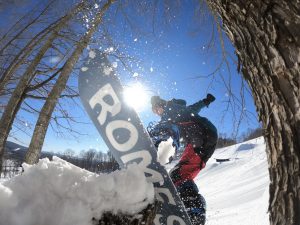 Lift-Lickers to Old Timers get the Season Pass for skiing once per week, except Saturday (which is bogus), for like 300 bucks or somethin’. But, dude, for like 600 you can ski Nub’s anytime so, that’s cool.

The sickest runs are Terrain Park, Smokey, Scarface, Chute and Power Glade. But, I also dig chillin’ on the Orange lift, ascending through the pines, then jelly-beanin off the south side. Betties and bunnies everywhere, Dudes. Decent grub. Probably, the best overall value for dedicated skiers. No lodging at Nub’s so check out downtown Petoskey or The Highlands at Harbor Springs for rooms. Projected closing, 03 April 2022. 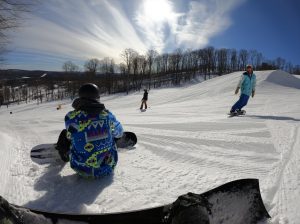 The Mountain’s got a 500 ft vertical drop, with a base elevation of 620 ft. But, the 1,120 ft summit contains only like 29% beginner runs, verse 41% intermediate, and like 30% Black Diamond. 5 terrain parks, including a sick skier/boarder cross course and Halfpipe. Cross country, snowshoeing, private and group lessons, ice-skating, Ziplines, and some radical tubing, all make for a killer spring ski adventure. And, when the bell at the Clock Tower rings it’s like you’re in the Swedish Alps.

Check out the indoor/outdoor heated pools and chillax in the hot tub. Apres ski rocks, with the Apres Ski Pub and the Eagles Nest, located at the top of Hemlock – the sickest view of Boyne Valley. And, keep your eyes out for those bunnies.

Hot Tip: Once I strapped a fake cast on my ankle and sipped Hot Buttered Rum at the base of the mountain in the Snowflake Lounge – got some suhweeet attention from the babbage. So, keep that in mind. And, remember, ladies. Never trust a man outfitted in new gear.