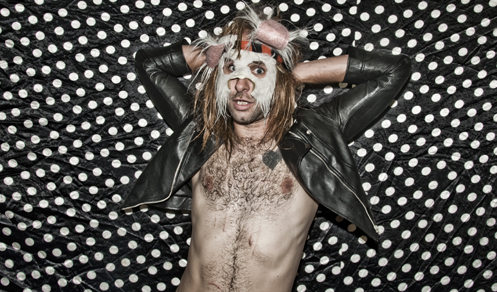 Always clad in a fuzzy (and mildly psychotic-looking) rabbit mask, and often wearing little else, NOBUNNY is a one-man pop-punk onslaught whose simple, infectiously hooky tunes and lusty outlook have earned comparisons to the Ramones, Hasil Adkins, and the Cramps. With untamed (and sometimes bottomless) stage shows that have some calling NOBUNNY the cuddly version of G.G. Allin.

NOBUNNY is the alter ego of Justin Champlin, who was born and raised in Tucson, Arizona, and relocated to San Francisco, California. Champlin first made a name for himself as the drummer with garage punks the Okmoniks, and later co-founded the Sneaky Pinks, a two-man punk-pop party machine.

Champlin streamlined the concept of the Sneaky Pinks by paring the consistent lineup down to just one person, or one mutant; as part of the NOBUNNY myth, Champlin claims to be the product of a liaison between a woman and a jackalope.

Sometimes working solo, and sometimes backed by a constantly shifting group of musicians, Champlin has been performing as NOBUNNY since 2001, though it wasn’t until 2008 that he made his recorded debut with the album Love Visions. Primarily recorded at home, with Champlin handling most of the instruments, Love Visions was released by the tiny Bubbledum Records label; it earned enthusiastic reviews in the underground music press and was reissued in 2009 by the somewhat larger 1-2-3-4 Go! Records.

NOBUNNY also kept up a busy touring schedule in the wake of Love Visions, telling reporter Eric Allen, “The road is good, because at least I know where my next meal is coming from. I find life much easier on tour. It’s not being on tour that is hard for me.”

In September of 2010, Goner released NOBUNNY’s second full-length album, First Blood. After a relatively quiet 2011, with no recordings released, NOBUNNY returned in 2012 with a single for Suicide Squeeze and an EP for Goner. He stuck with Goner for his third full-length blast of garage punk, 2013’s Secret Songs.

Check out YouTube for NOBUNNY vids, “Little Bo Bitch”, “Blow Dumb”, and my personal favorite, “I Was On (the Bozo Show).

NOBUNNY plays UFO Factory with Colorwheel and Devious Ones at 9pm on Tuesday November 10th. $10 // 18+.