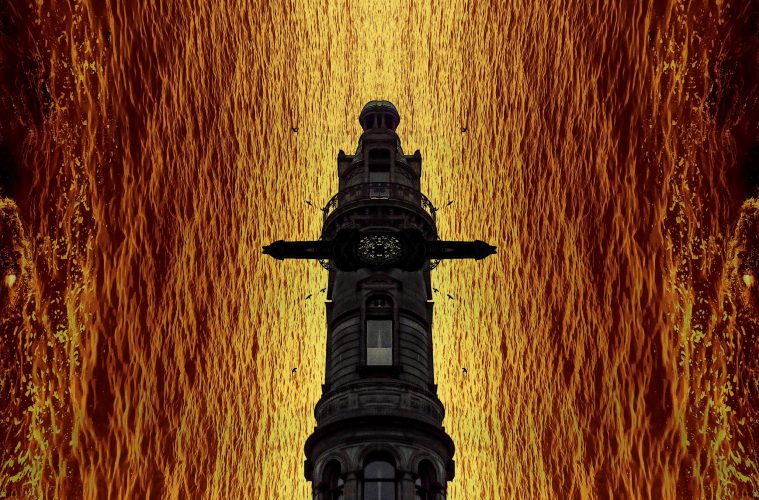 It is January. It is a Thursday. Rain runs off me in a lockstep. I admire it’s uniformity, it’s journey, before it coagulates upon the floor. This subway station is a coagulated mass of orange on grey, ashen odours and mundane expectations. A few eyes look into the dark when they hear the sound of engines and brakes. Metal battling metal. Expectations rise as it screams from down the tunnel and fade when a train doesn’t appear. Dissolve. Upon more metallic summoning, they coagulate again, tangibly. Solve et coagula. Dissolution. Reformation. Summoned.

A lockstep forms amongst the passengers and we move as one upon our train. One sits and reads a novel. Another sits a distance away and reads the signage, advertisements for dentists, The German Institute. Another fusses around in her bag and finds eyeglasses. I hold onto the handrail as the carriage begins to move. I have already decided to stand. I’ll be here for at least ten minutes (perhaps more if we have to change trains at Govan). Plenty of time to justify sitting. Plenty of time to think. To think about what I’m doing. Where I’m going. The man I’m going to meet. The man I will be tomorrow. So I stand. Suddenly, I am anxious. It comes like the sound of a subway train, rising, grinding. I think I may have a weapon in my coat. I can’t be armed. Not for this trip. The Reader looks up from the novel as I move a little. I wonder if they sense the mistake I may have made. I wonder if they know. I wonder if anyone on this train will see the heavens.  I check my pockets and find nothing. A lockstep looking for a lock knife. I am relieved.

The carriage shakes and I swing to the side a little. More looks. The chains hanging on my hip rattle a little. I am sure the river runs above me. She also carries ghosts and passengers into a shared realm. Those passengers are the ghosts I’m becoming. The ghosts are the already dead. The not alive. The “us” that awaits. Ghosts watching themselves. Waiting to die again. I wonder if my ghost is swimming above me. Waiting for me to meet the Present Death. I wonder if I am dead and living the past. The river is generations of suicide and murder. More of one than the other, I could have been either. When I reach the Present Death, I will know.

The train moves again and I know I am almost there. I forget about ghosts and blades.

My mind fixes it’s own passengers into a lockstep.

I move forward, acclimatising myself with the slowing motions of the train. As I reach the door I can see “St. George’s Cross” upon the wall opposite. I am here. The Reader looks again as I step off. The smell of metallic ash returns. With my back turned, I listen to the train leave and feel the change in the air as it does. Godspeed, Reader. It’s time to go overground.

As I step out from the station, I see the rain running off of everything before it hits me. Then the noise. All those droplets, singing their own symphonic hiss and kiss over the traffic and voices. A slight sense of apprehension, a feeling I shouldn’t be here. John Garfield’s voice from VHS tape a lifetime ago, “…for a man to live and know he’s guilty…”

The apartment isn’t far away. Lockstep. I am in synchronicity with the rain. My boots hit the ground as one layer of rain seems to leave and simultaneously remain to become one with the rain reinforcing it. Lockstep and coagulate. If only the alchemists made boots.

I march up Great Western. I am a steady blip of calm upon a crinkled, aged map of chaos. Girls speed by, arm – in – arm, giggling amongst themselves as their heels slide or sink. Names and numbers from signage move into the rain then downwards and I see alien words, glyphs forming in the rain upon the street, lingering for seconds before fading and gone forever. Never to appear again. The rain will never fall exactly where or as it once did. The words that run beneath, that carry us, the passengers, are themselves merely transient.

The clock tower at Cooper’s Corner. It signals to me the way an RKO Picture opened. I turn left and the rain, now my friend, seems to ease. I am no John Garfield. Guilty, yes. Corruption, however,  is like the words, either gone or dissolving into it’s own reflection. Abstract. Alive and dead. My pace changes. The gradient of the street rises. The dying rain runs louder as it runs faster down the gutters and the pavement. I am getting closer. When I finally reach the steps to the apartment building, I sigh. A small but sprawling tree licks me like a paint brush as I move up the steps, rinsing me with rain. I press the call – button and the electric buzz to allow me inside replies so quickly I know somebody was waiting. On the way through the doors, distorted versions of me gaze back. Brass frames around doors. Brass on the bannisters. I can see myself everywhere in darkened Gold. Polished brass telling the story of myself.

I reach the third floor and Richard, my contact, is standing in his doorway. His neighbour across the hall, a young punk that knows but won’t say what kind of man Richard is, retreats silently into his own apartment. A conversation just finished, I believe. I wonder if it’s related to the one we’re about to have? Solve et coagula?

“I missed you, Dog.” Richard smiles an impressively shiny set. We hug.

“You’re so wet.” He rubs my words off his arms.

Richard and I walk into the apartment. There are bicycles leaning up in the narrow hall. Massive, framed mirrors and posters cover the walls, aiding the close nature of what is actually a large place. Jack Nicholson, rappers and somebody actually shooting a long goal all stare, laugh or gesticulate at me. The hall lights are out and Richard apologises for the dark. When we finally reach the living room, there are small lamps and still little light. We sit on opposite sides of a table on low sofas. There is a faint odour of weed in the air, and I bristle internally at the thought of him being high before driving. The table is covered in books, cigarettes, empty glasses. More faces cast themselves from the walls. I look for John Garfield. If I find him, I may lose it. But right there, an anarchist “A”. I smile inside. Richard and I have fought and shall fight against corruption. But in this age, we have not the strength or the resources. Like John Garfield AKA “Joe Morse”, we are trying to seize our piece of it. Like the word dragged into the rain and reformed into something new, we hope we are part of the landing and forming. But we didn’t initiate the fall. We are passengers.

When Richard talks, he talks in a mixture of London and Nigeria. I can’t remember if he was born in London and moved to Nigeria before returning, or if he was born in Nigeria and moved. I also can’t understand why anyone would leave London in favour of Glasgow. HIs immaculate black ponytail appears motionless. A snake resting upon his back. He is dressed in a baggy black tee shirt and cargo pants. He asks me what happened to Benny.

“He got clean and moved in with his brother.”

He nods, as if gladdened.

“That’s good, Dog. I knew you liked him. I heard he had gotten good and moved.”

The rings on my fingers are rattling off one another as the air of impatience exudes from me. Richard gestures towards the bag, sitting at the far end of the table.

“If we set off soon, we should get down there in time for breakfast. I always need eggs after a long drive.”

I agree silently, and look at the bag. It is conspicuous. A bag fresh out of another bag. Light red and grey. It is one of the same bags everybody around this neighbourhood carries their gym gear in. Something Danish possibly, written on it. A silhouette of a wolf, I think. Even though it’s common, I feel like it screams out “GUILTY” but I stop myself. When I lift it off the table, Richard looks at it. Eyes will be upon it until tomorrow. He also lifts another bag, as he may stay for a while. I will jump a train back.

As we descend the stairs, the sound of the rain from outside becomes apparent again. It does not stop. People from outside are rushing in to get home. They fall silent and their rustling for keys and other noises do the same as we pass. We get the looks Richard’s neighbour gave as I arrived. Guilty. As I am silently placing the bag into the back of his car, Richard speaks.

“You OK?” I feel like one of his neighbours.

I’m thinking of Joe Morse and he tells me.

I smile as I get in. Either not getting the joke, or not feeling the insult.

Richard starts the car and then there is motion. Motion of the ghosts and the passengers. After some carefully slow driving, we hit the motorway. Leave the city. The rain has gone silent but for the impacts upon the glass. The sound of the engine is our song. I read words in the water and glass before the wipers obliterate them.

It is a terrible thing. Just to live and be guilty.