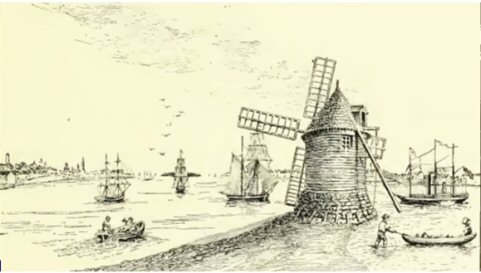 Could We Resurrect These Beautiful Structures That Once Graced the Shores of the Detroit River?

In early Detroit the French inhabitants brought with them their craft-ways and technology of the time. One technology was the mastery of windmill construction to grind grains and for water power. The Greek engineer Heron of Alexandria invented the first known wind-driven wheel that powered a grinder machine during the 1st century BC, according to the history books.

“Windmills had sails that rotated in a horizontal plane around a vertical axis. In north-western Europe, the horizontal-axis or vertical windmill (so called due to the plane of the movement of its sails) is believed to date from the last quarter of the 12th century in the triangle of northern France, eastern England and Flanders,” according to Wikipedia.

Mills powered by wind and water were part of the French landscape, every village had at least one. Many windmills are pictured in old Detroit history books and documents. There is the classic example at Windmill Pointe in Grosse Pointe, and the drawing of the windmill near the Old Knagg’s House in Springwells depicted in 1837.

Years ago, there were plans to reconstruct William Shakespeare’s “Globe Theater” on the banks of the Detroit River as a tourist attraction. Those plans never materialized. On that note, why don’t some entrepreneurs reconstruct one of these charming French windmills near the Detroit Riverwalk. What an attraction that would be!

For further information about the history of Windmill Pointe contact the Grosse Pointe Historical Society at: www.gphistorical.org. You will discover a copy of a rare painting of an old Detroit windmill painted by Robert Hopkin in the upper left hand area.

(Joe Neussendorfer is an Affiliate Member of the American Society of Civil Engineers (ASCE) and a 40-year Member of The Engineering Society of Detroit (ESD). [email protected]