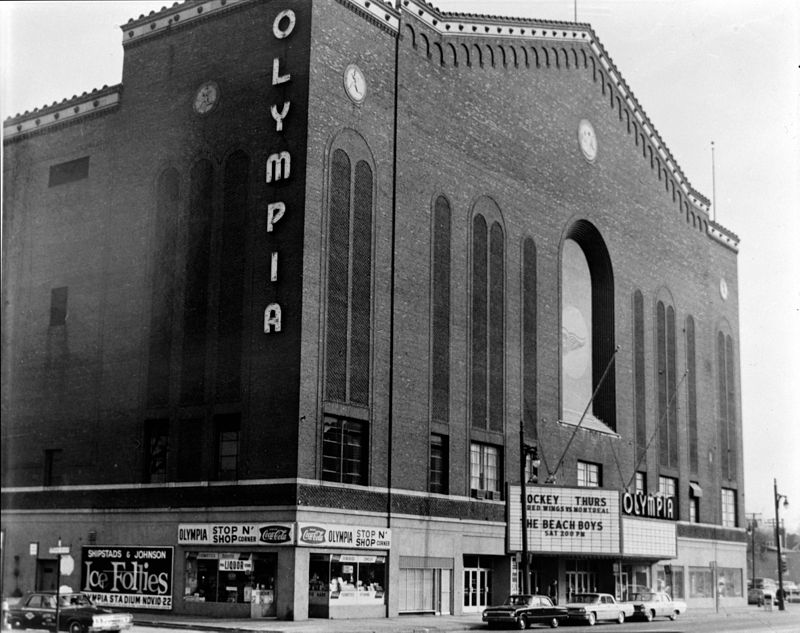 One of Michigan’s “Masonry Marvels” was the old Olympia Arena that dominated the Grand River at McGraw Avenue area in Detroit. The sport’s facility’s groundbreaking was in 1926. The masonry cornerstone was placed on March 8, 1927, and it formally opened to the public on October 15, 1927.

The prolific theater architect C. Howard Crane designed the impressive red brick, concrete and terra cotta-trimmed structure. Not only were the architectural aspects state-of-the art, so was the elaborate mechanical engineering aspects. The vast network of piping was designed to carry brine to cool the water to produce the ice playing surface. Most of this under-surface infrastructure was not visible to the public.

Over time, Olympia Arena was affectionately referred to as “The Old Red Brick Barn” by avid hockey fans. It was constructed primarily as the home of Detroit’s first professional hockey team. Earlier, the Detroit Hockey Club purchased the Victoria Cougars of the Western Canada League.

In 1933, James Norris, a Chicago businessman, bought the Olympia Arena property as well as the hockey team, which he renamed the “Red Wings” with the winged wheel as its team brand. The arena was home to the Wings for 50 years, and has witnessed numerous Stanley Cup Finals.

Between 1957 and 1961 The Old Red Barn was also home to the Detroit Pistons. It was a major venue for professional boxing and featured such prominent bouts as Jake LaMotta’s defeats of both Marcel Cerdan and the great Sugar Ray Robinson, as depicted in director Martin Scorsese’s ‘Raging Bull’. And, of course, who will forget the great Olympia wrestling matches, with tag team Dick the Bruiser and Sailor Art Thomas, squaring off against the likes of The Sheik, or “The meanest, dirtiest, most savage teams in professional wrestling”, Black Jacks, Mulligan & Lanza, and their manager “Pretty Boy” Heenan?

Olympia also hosted some of the greatest rock acts of all time including The Beatles, during their 1964 tour, The Doors (w/ special guest The Frost), Elvis in ’72 and ’77 (just months before his untimely passing), Marvin Gaye, Traffic (who recorded a live album in Detroit in 1974), the great Led Zeppelin in 1978, KISS in ’78, and Detroit’s own MC5.

After the National Football League’s Detroit Lions moved from Tiger Stadium in Detroit to the new Pontiac Silverdome in Pontiac in 1975, the City of Detroit proposed that a new riverfront arena, at lower rent than what Pontiac was asking for, be used for the Detroit Red Wings. The team accepted Detroit’s offer and did not make the move to Pontiac.

Currently, the site of the old Olympia Arena is now a Michigan National Guard Olympia Armory. There is a historical marker inside the armory commemorating Olympia Arena. The Old Red Brick Barn was demolished in 1987.

Now, we are entering a new chapter in the fantastic story of our beloved Detroit Red Wings. Ground has been broken for the reported $200 million Entertainment District envisioned by the Illitch Family and Olympia Development. Included are a new hockey arena and other residential-commercial projects encompassing some 45 blocks. Every effort is being made to provide construction jobs for Detroit residents in the Entertainment District Project.

Joe Neussendorfer is an Affiliate Member of the American Society of Civil Engineers (ASCE) and has been writing about local history over the past 40 years.

Photo by G.G. courtesy of Wikipedia