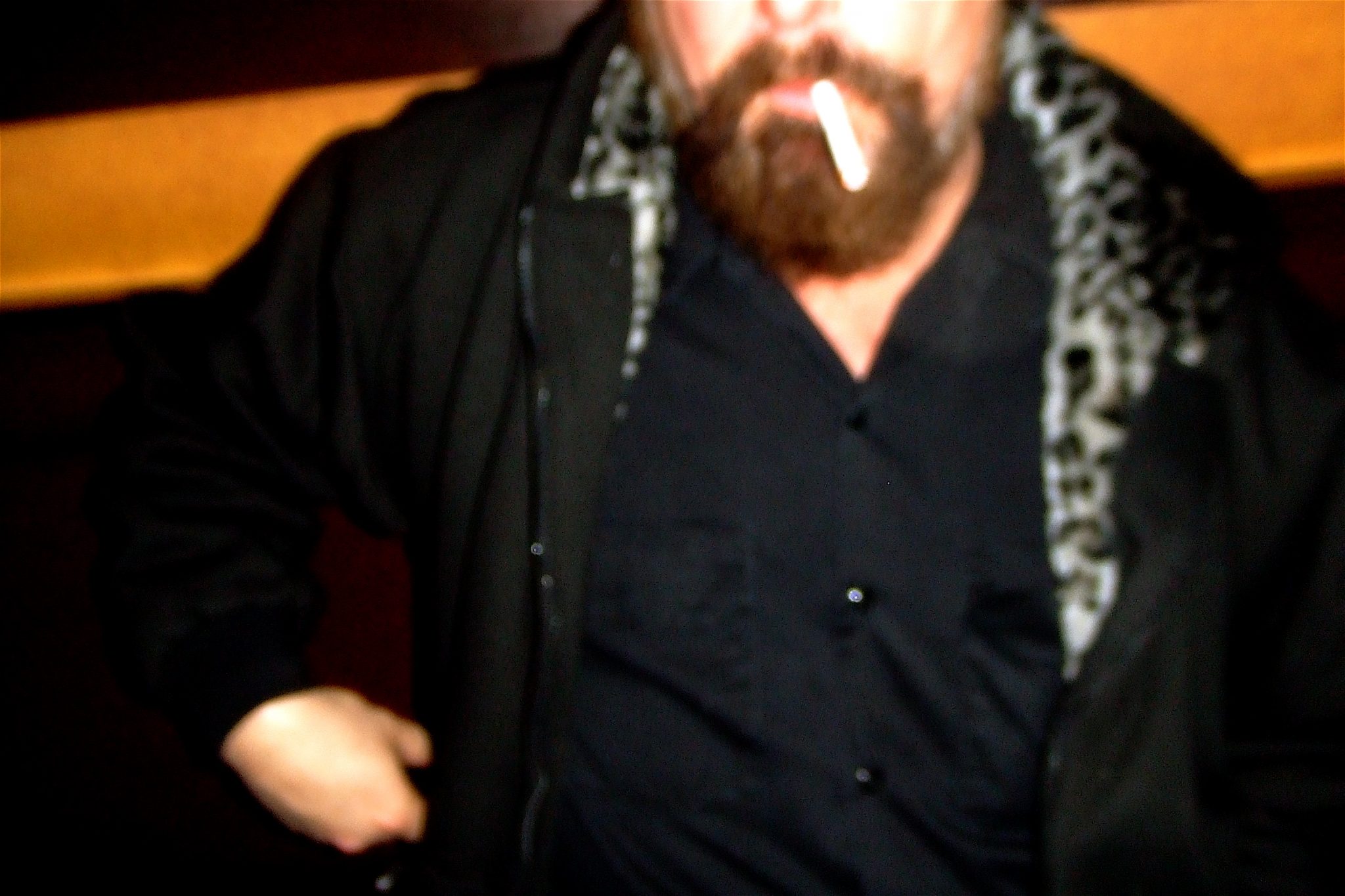 Out To Lunch With Jerry Vile

When I entered Red Coat Tavern II, a British style pub, located in West Bloomfield, Jerry Vile was seated at a table in the bar smoking profusely and speaking quickly into his iphone, using intermittent flourishes of business and pleasure with someone named Danielle. There was talk of photos, boys dancing naked on tables, deadlines, and the fact that both he and Danielle knew too many Danielle’s, which is why this Danielle changed her name to ‘Viva’.

A waiter appeared and took our order – two Original Red Coats, both med rare, mine with blue cheese, Jerry’s with American. “Definitely, the way to go,” asserted Vile. “Made from the same oil that comes out of our very own ground.”

And, then we found ourselves sharing that rarest of moments – a first experience. It seems Jerry had never tried mango tea. Until now. There I sat, silently across a two-top, observing Vile’s reaction to one of life’s waning occasions.

“So much in erotica is really cheese ball,” says Vile. “Dirty’s not an original idea, but it grew in a really organic way, word-of-mouth.”

Vile continues between hits of his cigarette, “The artists I would’ve killed for in the beginning are now our standard artists. The Dirty Show is getting bigger and bigger. We pursue top talent because we love their work, think they’re cool, edgy, idolize them as art fans.”

As far as criteria, “you just know it when you see it,” Vile says. “People vote, we have five jurors this year, but too many force mediocrity to shoot to high levels and crank out stuff that isn’t engaging, so we also curate.”

When asked if Vile will be showing this year he’s quick to point out, “We’ve had over 5,000 entries and only 300 will be on the wall. It isn’t ethical to stick my art up there. Besides, I don’t think I’m good enough to be in The Dirty Show.”

Vile’s phone rings continuously. He answers, politely, as we chat in and around tea and burgers. Vile discusses the Dirty Show in LA and the fact he couldn’t have done it without ‘their’ help, he considers a Cleveland show, a 1,200 sq ft gallery, and then his eyes light up with “a really wonderful idea” – the Congress Theatre, though he’s “worried about the space being too big.”

“I don’t think I’m good enough to be in The Dirty Show anymore.”

“Punk rock taught me DIY,” Vile says, as he ends the call with a touch of the button. Back in the 70’s, Vile was going to attend USC film school but ended up a punk rock fan, hitting bar after bar, catching acts like the Weirdos, Devo and the Dickies. “It didn’t matter with punk rock, whatever was on stage,” he says.

He became a photographer but claims he “was not a good one and not a smart one, but a poor one.” Lights another cigarette. “I could make a roll of 24 black and white last a week.”

Broke, with no prospects, Vile came home to Detroit and started his own band – The Boners. “We got big enough to get gigs, played Bookies, but we drank and drugged our profits.”  Though, it should be noted bass player, Steve King, went on to win a Grammy working with Eminem.

The Boners also earned a page in Motormouth, which led to Vile landing a roll in Jonathon Demme’s, “Who am I This Time”, written by Kurt Vonnegut. “I was more than an extra and far less than a supporting actor,” he says with a smile.

It was around this time Vile began his first magazine. “White Noise may have changed publishing, I don’t know . . .” The magazine did things like having The Ramones fill out applications at McDonalds and found pleasure in plotting the “stupidest” questions for interviews.

The 80’s closed with Vile folding his second mag, Fun, and with Jerry losing his first million through his software company. Something he refers to as his only ‘straight job’. “I didn’t get the money but I could’ve.” He explains. “I had a $250,000 check in my hand and I should’ve sold the company on that day. Instead, I created another product that never worked.”

Orbit Magazine began in the ashes of Fun, and for the whole of the 90’s it operated out of an office in Royal Oak, which sat directly above a bump shop. “We were in the wrong place at the right time – when you look at guys at the Onion. If we were in LA we would be millionaires.” He continues, “ Vegas stole our slogan and managed to turn it into a positive – What happens in Detroit stays in Detroit.”

Thinking back, I don’t know anyone who didn’t read Orbit.  It was witty, funny, cutting edge, designed to be commercial, without ever turning into, as Jerry puts it, “a complete suck-ass paper” It was Orbit, after all, that once pointedly asked Captain Pickard if he didn’t think ‘they’ would have a cure for baldness in the future. Where upon, the good Captain replied, “they have a cure for vanity.”

And, of course, the icon, Orby, designed by Terry Colon, catapulted the paper into local folklore by catching the eye of director Quentin Tarantino. Look again, indie cineastes, that’s the Orbit t-shirt you see on Tarantino in the cult classic, Pulp Fiction.

But, it’s difficult trying to be funny for ten years, making a living doing what you want to do, and selling ads to keep your work alive. At its height, Orbit had twenty people on staff, who were “severely underpaid, and even when Orbit could afford them they still had to get real jobs.”

It was at that point Vile teamed with then partner, John Badanjek, to create a more commercial weekly. But, what to call it? Jeff Grand – of Howling Diablos fame – and the late, great scenester laureate, Scotty Ross, came up with the name Real Detroit.

“I didn’t stop Orbit until Real became successful,” reveals Vile. “We were embarrassed by it, we didn’t want our name associated with it. But, here I am, years later, advertising The Dirty Show.” It should be said that Vile is no longer associated with the publication, having dissolved his partnership with Badanjek long ago.

Vile lights another smoke, as we get back to this year’s event. “Where else do people pay to see art, outside of maybe a museum? I want Dirty to be the most fun and engaging show possible. I want people to feel empowered by their sexuality. There will be a lot of diversity – you have to be able to go and say, ‘that’s my perversion’.”

“I want people to feel empowered by their sexuality.”

With over three decades of providing music, words, art and perversions to the Motor City, I ask Vile if he feels a sense of accomplishment. “No matter how much I accomplish now in life, I’m still not gonna have as much fun as you do finding a $20 bill when you’re twenty.”

Interesting. And, quite possibly true.

“I don’t like being old at all,” says Vile. “There’s no benefit to it. I would trade all of this wisdom for youth. I love youth. I miss it.”

Vile lights another cigarette and takes a sip of mango tea.