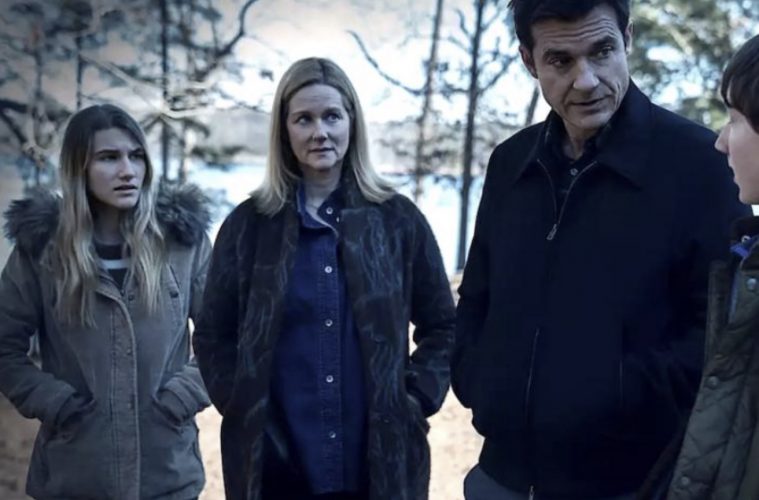 anthony brancaleoneApril 27, 2022
2022EventsFilm
The final chapter of the gripping and gritty story of the Byrde family and their misadventures at the Lake of the Ozarks wraps up with the release of the last seven episodes of the fourth and final season of OZARK on Friday, April 29.
Fans of the critically-acclaimed Netflix series can experience the beginning of the end (?) of the Byrdes’ trials and tribulations during the “second round” premiere watch party at Marty Byrde’s Bar & Grill on the historic Bagnell Dam “Strip” in Lake Ozark. The festivities get started between 5 and 6 p.m. with an OZARK and Lake of the Ozarks-themed scavenger hunt.
“It’s kind of bittersweet,” says Lagina Fitzpatrick, Executive Director for the Lake of the Ozarks Tri-County Lodging Association. “It’s been a great show, so I’m sad that it’s ending but I can hardly wait to see what unfolds for Marty and his family during the final part of the season.”
When the fictional series first launched in July 2017, it created a lot of buzz at the Lake of the Ozarks and a lot of interest outside of the Lake area. At first, some locals weren’t thrilled about the fictional dramatization of the Lake of the Ozarks, but most have come around to enjoy the show for what it is – purely thrilling entertainment. For some travelers, it literally put the Lake of the Ozarks on the map, creating an insatiable curiosity about the area. 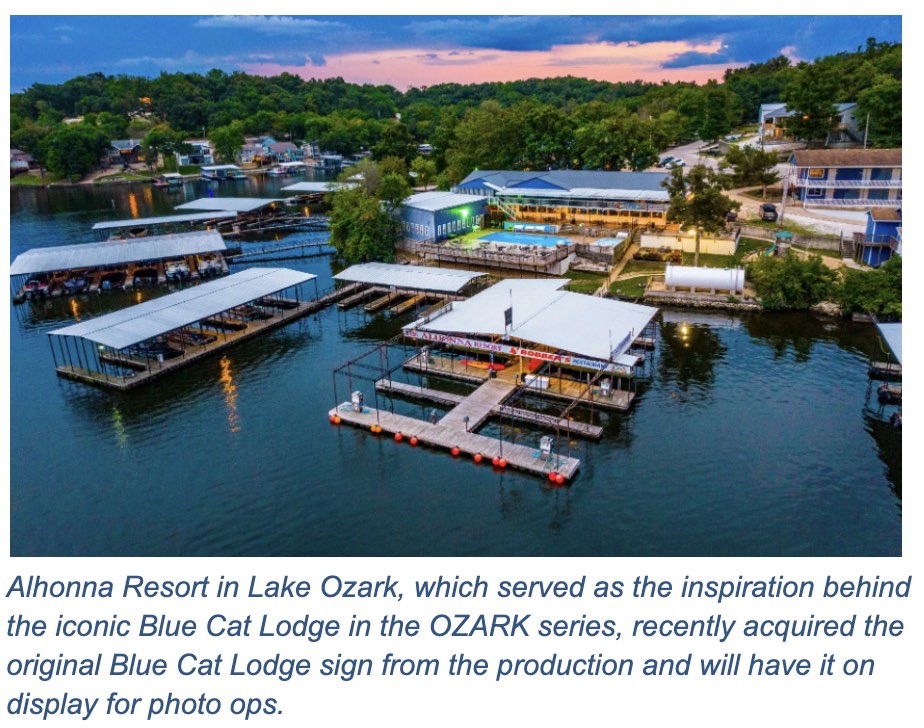 “After all the national and international attention the series received when it was first released, we had a lot of people visiting our website or calling, saying, ‘I didn’t realize this was even a real place!,'” says Fitzpatrick. “So, the series brought us a lot of attention from people who had no idea where the Lake of the Ozarks was and some that had never even heard of it before. It’s been great exposure for us, and we’re grateful for that.”

OZARK tells the story of the Byrde family and the arduous challenges they face as they relocate to the Lake of the Ozarks in order to launder money after running afoul of a powerful Mexican drug cartel in Chicago. The award-winning series features Jason Bateman as the main character, Marty Byrde, and Laura Linney as his wife, Wendy Byrde. The wildly-popular show was the creation of St. Louis native Bill Dubuque, who worked at Alhonna Resort at the Lake of the Ozarks during the summers of his teen years.
The premiere party is hosted by the Tri-County Lodging Association and the OZARK-themed Marty Byrde’s Bar & Grill, which features food and drink items, as well as decor, inspired by the series.
Those planning to participate in the scavenger hunt will need to arrive at Marty Byrde’s between 5 and 6 p.m. to reserve their seats for the screening and to receive their first scavenger hunt clue. The screening of the eighth episode of season four will begin at 8 p.m. There is no admission fee to participate in the scavenger hunt or attend the watch party. Both are open to the public.
“As people show up to Marty Byrde’s, they’ll receive a punch-card for the scavenger hunt and receive their first clue. From there, they’ll have six more stops to make along the Strip before they can complete the scavenger hunt and return to Marty Byrde’s,” Fitzpatrick says.
The final piece of the scavenger hunt puzzle will be trivia questions based on the series and local Lake of the Ozarks highlights. Scavenger hunt participants will have to complete their hunt and be back to the bar and grill no later than 7:45 p.m. to qualify for the grand prize package valued at over $1,000. The prize package features four tickets to a St. Louis Cardinal’s baseball game, gift cards for local Lake of the Ozarks restaurants and attractions, and Lake of the Ozarks t-shirts and souvenirs.
January’s premiere watch party for the first installment of the final season of OZARK brought a full-house of OZARK fans to Marty Byrde’s.
“The show has such a huge following,” Fitzpatrick says. “It was a lot of fun to see so many locals and visitors all coming together to enjoy the experience.”