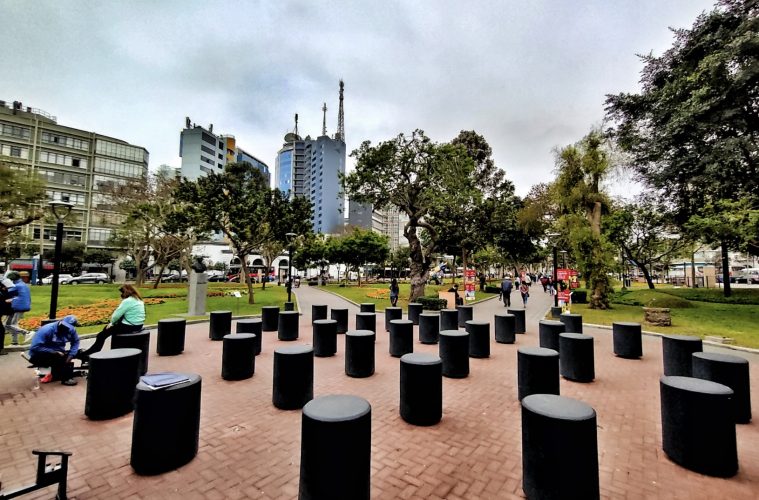 That day I sat at some nondescript cafe, on the edge of Kennedy Park in the Miraflores district, Lima, Peru. Many tourists come to this district, though, fewer since covid. That day I sat there, my fourth, I considered the vices I craved, felt heartbreak, thought of the thinness of the air. The air wasn’t thin. ‘Just a little bit stressed’ lyrical segments were playing on my emotional strings, from a song sung by friend, Roma. Feelings, I was actively trying to thwart, before the stone feet of Lima.

In that moment, though, I was especially taken by a mid-aged woman walking in the park. Double mask, plastic face shield leaned up from her face, latex gloves, and a 2-L of Coca Cola clutched in her left arm. Her hair was light brown, pinned back, like her lips. As she walked, she readjusted the Coke bottle several times, holding nothing else but a small purse, it seemed an episode of hardened determination to just make it. Inevitable death particles carrying in the wind amongst gaseous flavors of sodapop life. Circling her and I were aggressive no-smoking signs, light gray sweaters with intricate lighter gray striped patterns, and vendors peddling above-average wares. My earlier considerations dissipated with this woman. I watched her sharp movements and reflected something warm back onto myself.

Those moments passed, I walked back to my apartment. New thought: ‘Surely, the fact that tap water in Lima was not potable had to be of a greater importance than the presence of cigar lounges— apparently not.’ Another thought: ‘Surely, unregulated traffic exhaust and the localized heavy air pollution that entertains the streetside pedestrians is a greater problem than some dirt and debris on the roadway— apparently not.’ The number of backwards priorities, in my eyes, were numerous. An eco-conscious piece of street art of a Peruvian woman being weighed down by plastic bottles spilling out of a water faucet– caught my eye. As I sat there that day, then back home, judging, I meditated on these transgressions of a society that has taken relatively extreme social efforts to curve the covid infection graph. I meditated on these things, drew breath. Americana everything has seemingly unreasonable attributes. European society is full of horrid atrocities and self-loathing, past, and yes, present. Zen thoughts carried further, ‘Xi Jinping, no thank you!’ The ambiguous mob that is Americana prefers iced drinks in the winter; we let our kids shoot each other. Thought, concluded.

I found myself settled enough to continue onward. Though, it was not until a few days later, this time at a lowly lit cafe growing avocados out of plastic cups, where I began to see not the reasoning of these Peruvian misgivings, because my own Americana perspective on so-called social ills in Peru is a crock of shit, but rather the basis for all things human. It was there, in that distinct cafe, under the perpetually rising towers of Lima, the answer came: en masse life.

At five different points whilst walking with my backpack I participated in armored car cash pickups. More so, watched. None were quite as subtle as cash pickups I’ve witnessed in The States, which usually include a metal vehicle parking at a random front entrance, followed by 1-2 drivers who walk up with some off-white cotton bags, followed by a casual exit off the premise with the same bags, full of rolls of coins and elastic bound cash. It is a brief affair, often unnoticeable. And seemingly ‘safe,’ whatever the hell that word means. These cash pickups I watched in Peru, however, involved 3-6 men in matching poignant tan outfits. I was getting a slightly ‘out west’ vibe from their attire. Striking enough to remember– yes. The whole thing, minus their stance would have gone unnoticed, except their sporty gun of choice. Silverish plated revolvers. At least they looked like revolvers. I am not a gun guy, no matter how many times I watch Lord of War with Nicolas Cage, but these were certainly not the standard handgun, often seen holstered by routine security or policia personas stationed around every bank or government office. AKs wouldn’t have even surprised me. But silver revolverish arms? They took wide quick steps, eyes on the alert as they resolutely lept from left to right, stretched double medical grade face masks, and those gross (yes, gross) sunglasses people furnish when fishing– the kind with a bright orange reflection. I wasn’t sure how to feel, in each instance their revolvers were drawn and held up, in the fashion that asserted, ‘I am ready to shoot you’ but also with a seemingly ‘howdy’ vibe. Perhaps, this strategy worked to keep away would be trouble, but I remember in the moment thinking that this highly stylized and on-the-ready regiment was entirely unnecessary. Another judgement, “let it go,” I said aloud.

Culturally, I was seeing an intensely complex amalgamation of many different people and his/her stories. Witness of the Americana burger-based commercial values, to the Eurocentric colonial backdrops and rewrite of folk currency, to the Central and South American social issues, to the plurality between indigenous memory and contemporary constructs– such as drug stores called Inkafarma, to the paradoxical transgressions of race, place, and class, which were perpetually unfolding. There were few seemingly Black Peruvians, better termed Afroperuvians or Afroperuanos. A point I noted, which pressed me to look up the statistics. Peru has fewer Afro-descent peoples than neighboring countries like Brazil or Colombia, and most reside in smaller cities along the coastline. Social points of interest that led me to dig into some Afroperuano notable writers and folklorists, whom I invite you to dive into– Victoria and Nicomedes Santa Cruz, Lucía Charún Illescas, Enrique Verástegui. These names floated in my head, in conversation with my Airbnb host, whom I befriended, Victor Flores. He is also a writer, namely for his work (though entirely unrelated to the aforementioned writers) ‘Controle su orgasmo en 6 semanas, 365 positiones sexuales.’ I held these thoughts, and words.

Transitory linguistics student thought: the languages we speak– create us.

Then there were the smells. Good smells, smells full of desire, fruit smells, ocean smells, wafts of partially bad indeterminates, and downright unsettling smells. For some reason they all jumbled together, animated as one single note ‘quench with us.’ This was the saying I had gathered multiple times, ‘quench with us,’ meaning the duality of bad and good, plus gray, all were some sort of bliss, if not important, attribute of the cultural dish of Peru. Simply— these smells pressed me to eat and drink with, then, strangers. Ever listened to the smells of a place and not exoticized the feeling? I tried. This push to break literal bread with personas I met along my walks was seemingly aligned with the flavor of essence. Something akin with my prior Peruvian reckoning of ‘en masse life.’ Indeed, we all want essence, no? 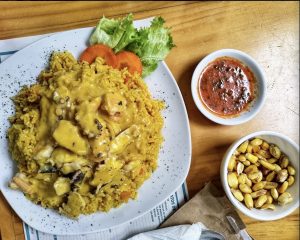 Lurking beneath the enormous wheel of exhaust, coffee, ficus, coca leaf, stone, soft clouds, and Huancaína sauce (Peruvian cheese sauce), was a wet earth and ancient curiosity of intense and multi-note flavor. Perhaps, celestial notes. Knowledge I tried to encapsulate, while chewing bits of mariscos (seafood) in a salsa-heavy rice dish and peering through temporal windows.

A few years ago, I was in Bogotá, twice. There and now, then in Lima, I saw cultural comparisons. The rummage of the sports world, particularly soccer. The rummage of Latin American sensuality (nay, magic), far from Americana forms of billboard sexualization. In Lima– the fried bread things, vegano y vegetariano joints, tentacles in sauce, piles of cebiche, pre-Columbian traditional plates, hundreds of ensalades, sangucherías with their avocado and white cheese bites, the prized maracuyá (passion fruit) in cakes and beverages, pasteles, and then of course endless hamburguesas. The rummage of constant, constant, constant Eurocentricraze– common around the world. Y’all, the damn burger is winning. Emoticon: sad face.

Well fed, stunned with invitation, sickly, sick with my own love of ocean mist brushing up the soft stone feet of the Andes– I was fully engaged. And, in a sudden flurry of music and figurative dance in the streets, I felt the buzz of it all. The sway of the tights pants, the colonial Catholic churches built on top of Incan temples, all the collective knowledge, the flow of the black hair in mild wind, the hardened paths of daily routine, the indigenous color-inspiring women with their wide wooden hats and star-eyed children, the contemporary Alpaca scarves in temperate chill– celebracion in lightness, and too, after the sun has set. Lima. 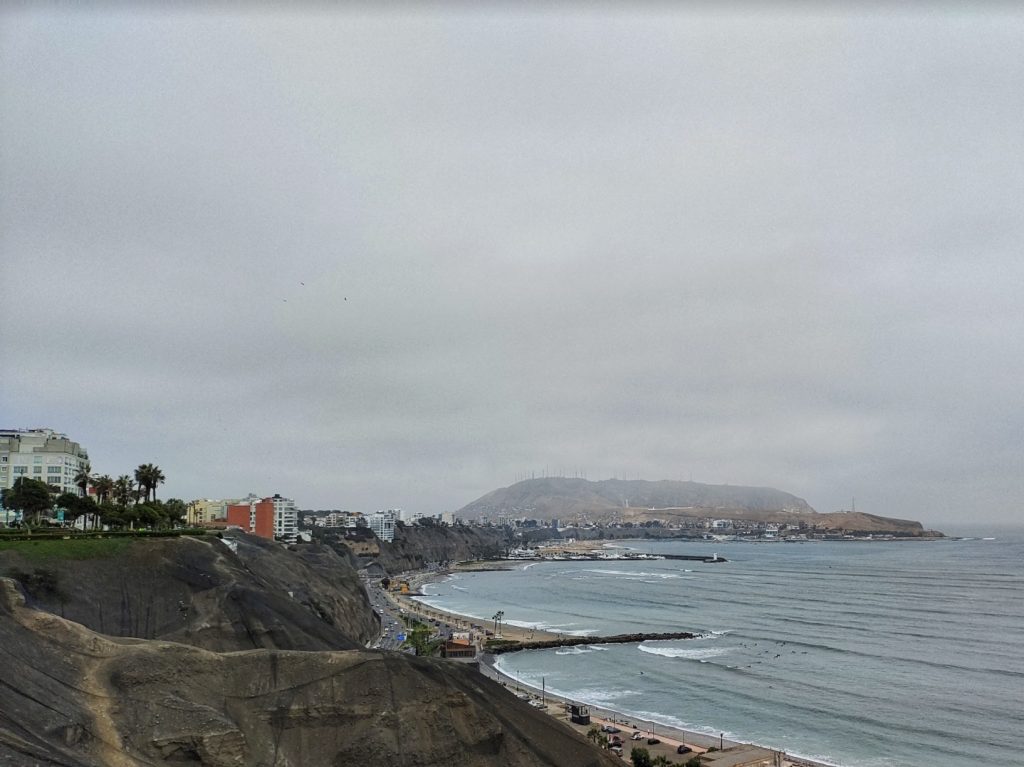