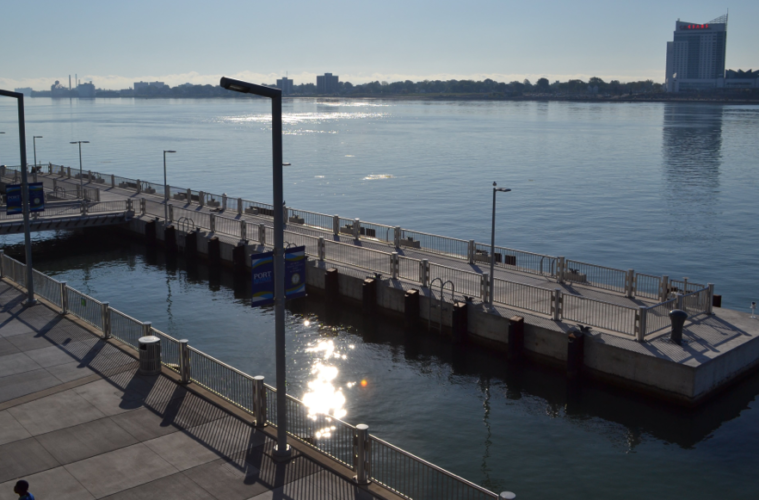 Detroit was founded in 1701 by French explorer and adventurer Antoine de la Mothe Cadillac. He planted the flag of France at the foot of what is now Griswold Street and secured the geography between the upper and lower Great Lakes. By 1751, the area was known as Petit Cote (Little Coast). Centuries later, the Port of Detroit has become the largest seaport in Michigan.

In 1925, the Michigan Legislature passed Public Act 234, the Port Districts Act, calling for the creation of Port Districts to bring about coordination of maritime trade. In 1933, the Detroit/Wayne County Port District was established with jurisdiction over the water and shoreline of Wayne County.

As more maritime development began to take place, a stronger need for concentration on port activities arose, the Port Authority was created in 1978. The original meeting of the Port Authority was held October 10, 1980, and Henry Ford II served as its first Chairman. The Authority has a five-member board of directors and its current Executive Director is John Loftus. He previously held the same position for the Lake County Port Authority northeast of Cleveland.

According to Authority statistics, companies use its privately managed port facilities and terminals to manage about 17 million tons of cargo annually. Last year, the Authority was given the Robert J. Lewis Pacesetter Award from the St. Lawrence Seaway Development Corporation, an annual award presented for “aggressively marketing international exports and imports.” Detroit/Wayne County Port got the award because it was responsible for a 53 percent increase in cargo (501,000 tons) moving through the Seaway. Thirty-one companies operate at 29 terminals overseen by the Authority. The Authority owns the city’s only general cargo terminal.

The Port Authority is responsible for close to 16, 000 jobs in Southeast Michigan. This translates into one-half billion dollars in direct business revenue, $225 million in personal income, and $288 million in State and Federal tax revenues. Since 1959, the St. Lawrence Seaway has provided a link between the world marketplace and the agricultural heartland of North America. The 2,000-mile long seaway system is responsible for annual commerce exceeding 200 million net tons.

The shipment of foreign goods through Michigan waters translates into $2 billion to the State’s economy. Annually, approximately 7 million tons of overseas and Canadian cargo crosses our docks here in the Port of Detroit/Wayne County. Foreign shipping accounts for 20 percent of all maritime activity with the State of Michigan.

With the current expansion of the Panama Canal underway, the wider canal will give shippers an option to bypass existing container ports on the West Coast. Now, 70 percent of U.S. container traffic from Asia passes through Pacific ports. The current, huge container ships are too large to pass through the existing Panama Canal. Once the new, expanded Canal is open, these large container ships can pass through it with ease and move directly to the Gulf Coast and move directly up to the eastern Atlantic Seaboard to the Ports associated with the St. Lawrence Seaway system. While all of this will take some time, the Detroit/Wayne County Port Authority will have to begin planning for increased maritime traffic to Detroit. Two notes of interest: Livonia, Michigan- born Civil Engineer Alfred Noble helped design the old Panama Canal in the early 1900s and all this increased traffic via a project he worked on is now coming some 100 years later. And, Detroit’s strong French heritage in creating our Port, from the river shores all the way up to the old French-heritage port cities of Quebec and Montreal is as strong as ever.

(Joe Neussendorfer is an Affiliate member of the American Society of Civil Engineers and its Southeast Michigan Chapter and a 40-year member of the Detroit Engineering Society (ESD) has been writing about Michigan construction-architecture-engineering for 40 years. His email address is: [email protected])