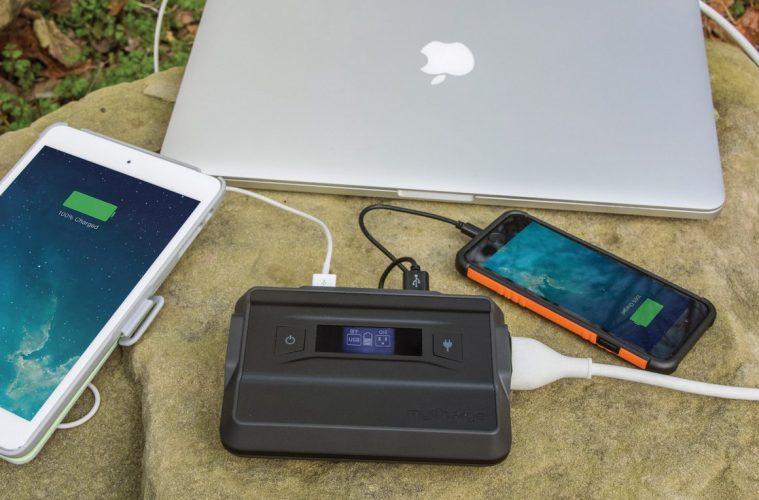 Designed to replace the “heavy and bulky generators” used for tailgating or camping, the AdventureUltra portable charging hub is a streamlined power source option that claims will run a 42-inch television for up to three hours. While we did not put that claim to the test we did use the unit to power up our iphones and ipods for that period of time and were very satisfied with its performance.

We brought the hub with us on urban excursions both in the car and in the field as a primary source of power for our devices and found it to be quiet useful on photo shoots and in coffee shops while we were working. It certainly resolves the problem for those studying through the night in locations with too few outlets.

Also, became quite useful when a staffer’s 2 year old needed repeated screenings of Lil’ Einstein on the ipad during road trips or late summertime Charlie Brown movies in bed.

The compact device weighs 1.05 pounds and measures 1.2 X 5.8 X 4.1 inches. It has a maximum power output of 45 watts, enough to run 2 in 1 laptops and new laptops, such as the 12-inch Macbook that require less than 45 watts, and works when powered off and solely charging, or when powered on and charging simultaneously.

Once drained, however, powering the hub itself took a bit longer than we anticipated. But, again the charger powers devices while it is being recharged so we were rarely if ever inconvenienced.

The portable charging hub and inverter has 1 AC power output, 2 USB-A outputs, 1 USB-C output and comes with a recharge cable.

The hub is encased inside an insulated and rugged exterior case with latches that close to seal off ports. While, the charger is said to be safe from drops up to three meters we did not get that brutal with the unit. However, it did fall from heights of 3-5 ft from time to time and all was well.

The cpm insulation built into the case of the Adventure Ultra series charger is said to protect the batteries inside from extreme heat and cold, guarding against degradation and a loss of power. While we used the charger in late spring and through a hot, humid midwestern summer we have yet to test it during a fierce Michigan winter.

All in all, a handy little hub that extends the battery life of most devices by hours and provides power for lights, radios, drones, and televisions, granting users mobility. Perhaps, a wee bit pricey at $129 – but, then where would we be without power …