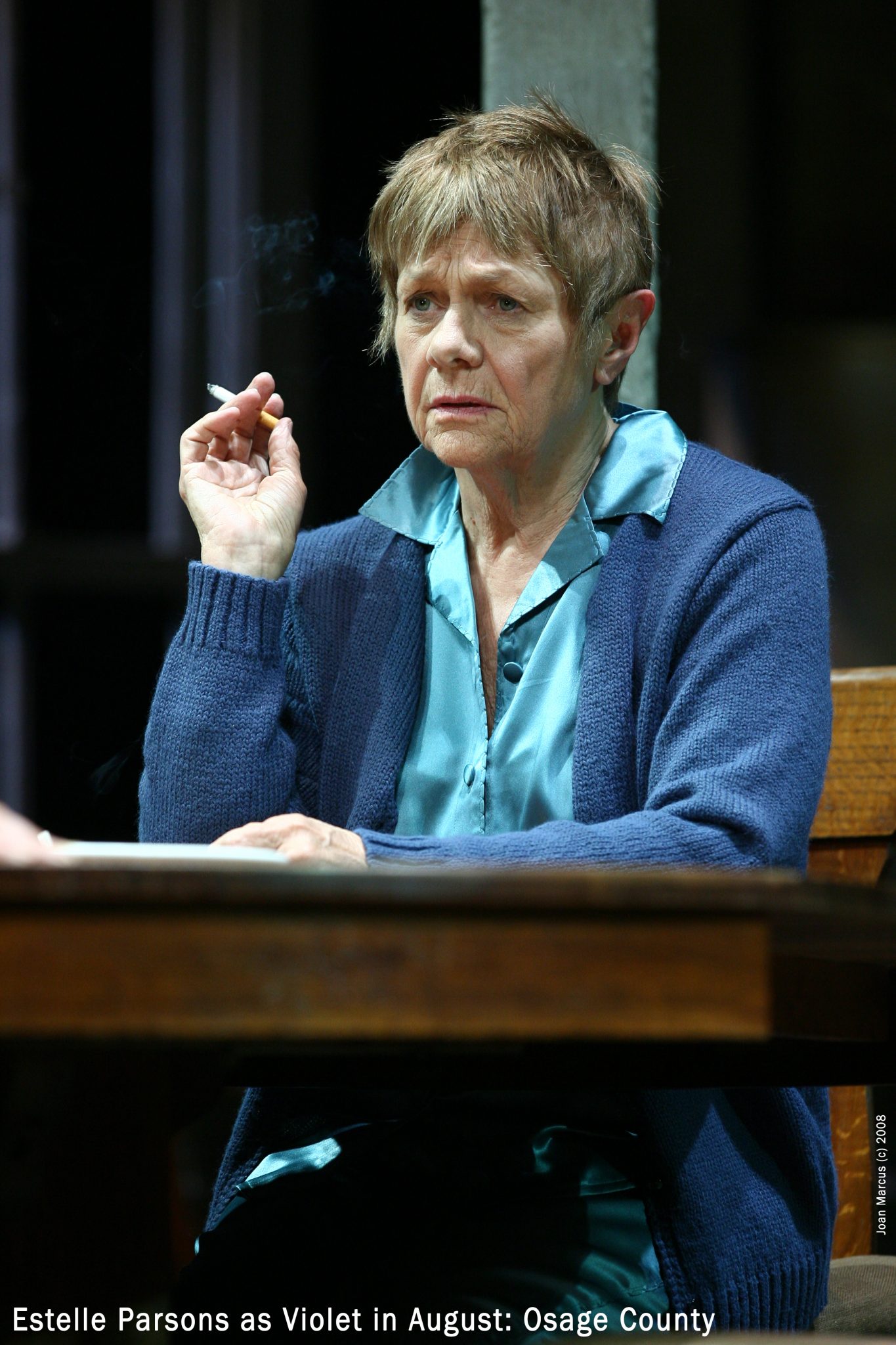 Estelle Parsons is probably best known around the country for her recurring role as Beverly Harris, the amusingly overbearing, shrill mother of Roseanne Conner on the sitcom Roseanne. Others may remember her Academy Award-winning performance as Blanche Barrow in Bonnie and Clyde.

But astute theatergoers know that Parsons is, in fact, one of our finest stage actresses. She has spent most of her professional life in the theater, which is her passion. She made her Broadway debut in 1956 in Happy Hunting, a musical starring Ethel Merman, and over the course of her 50-plus year career has been nominated for four Tony Awards.

Parsons, who was inducted into the Theatre Hall of Fame in 2004, is currently starring in the national tour of Tracy Letts’ Tony Award and Pulitzer Prize-winning play August: Osage County. She plays the outrageous, drug-addicted Violet Weston, the wounded matriarch of an incredibly dysfunctional family, who seems to delight in wounding others, especially her three daughters.

Parsons discussed the role – and a few other things – while I sipped champagne cocktails.

Q: After appearing in the show for almost a year on Broadway, why were you so eager to go on the road with August: Osage County?

A: I haven’t had much opportunity to tour, because I was always bringing up kids. I went on the road for three months with Miss Margarida’s Way, but most of the time when I got an offer to go on the road or go to London, I couldn’t go. But I’ve always loved the idea of touring: I have this old dream of being in vaudeville.

And there are all kinds of different audiences out there. I learned that from doing summer stock. Audiences are always a learning opportunity.

Q: I heard that! Actors always say that each audience has a certain personality. Do you find that affects your performance?

A: Absolutely, particularly with this play, where the audience is so dynamic and so vocal in every way – moaning, groaning, laughing, crying. The audience is really the third essential part. They’re not just sitting on their hands listening. They’re incredible and they’re always different, and as we go from city to city, I’m sure they’re going to be very different in different places.

Q: Believe me, the audience will be very different in the Motor city, honey. How did you wind up doing the role on Broadway?

A: Rondi Reed [who originated the role of Mattie Fae Aiken, Violet’s sister] and Laurie Metcalf, both of whom belong to Steppenwolf, are friends. I’ve worked with both of them at Steppenwolf, and with Laurie on Roseanne. We were out one night, and they said, “Deanna’s leaving. You should play that part.” I had seen the play a couple of weeks before, and I said, “What are you talking about?” And they said, “Ever since we read this play, we thought you would be perfect for the part.” And of course I’m still wondering why they thought that. Anyway, after a few days, I called Rondi and told her I was interested. She said, “Okay, I’ll put it in motion.” And she did. I went to meet the director, and they hired me.

Q: Really . . . no casting couch? Times have changed. You’ve said that you didn’t go into the play with the intention of making the role your own.

A: The play was a very big hit, Tracy Letts won the Pulitzer Prize and the Tony Award, and Deanna and Rondi also won Tonys. Quite aside from the prizes, I think that if something is a hit, then the hit should be maintained. The play wasn’t broken, so I didn’t see the need to go in there and fix it. I thought my job was to replace what was there, to do what is there. I had seen Deanna do the role, and I’ve spent my whole adult life looking very seriously and concentrated at actors. So I just felt I was her doing the role. People laugh at me when I say that, because I’m nothing like her. But I don’t usually try to put my personal stamp on things. I try to play the play the way it’s written.

Q: How did the role come about in Bonnie and Clyde?

A: In 1966, I was doing the Berkshire Theatre Festival in Stockbridge, MA. I had seen Arthur Penn’s movies, and I wanted to work for him. I managed to get an interview with him for The Skin of Our Teeth, which he was directing that summer in Stockbridge, and he hired me. And working with him, I suddenly knew that I was in the right profession. I was [almost] 40 by that time, so I’d been in it alongtime.ButIalwaysusedtothink,“AmIintherightprofession? Maybe I should have kept on at law school, or maybe I should try something else.” But working for Arthur Penn, I realized that I was in the right place and I should be doing what I do, and how wonderful it is when I can have that kind of experience on the stage.

And then he asked me to do Bonnie and Clyde. I was just about to move to San Francisco and join a rep company, which I’d always wanted to do. And the day after he asked me to read the script, I got a phone call telling me that the funding for the rep company had fallen through. So we weren’t going. I called Arthur and I read the script, and I thought, “Why is he offering this to me?” I’m really not too interested in movies. But the more I read it I realized it was an incredible part. And I really was excited to work with Arthur again.

Q: Did the Academy Award affect your career?

A: It did in that I could have had a lot of movie success, which I wasn’t really interested in. Looking back on it, I think that’s kind of too bad. Sam Cohn was my agent, and we were getting all these really good offers. But they conflicted with work I was doing onstage, things that really interested me. I did a few movies, but I did them when I was on vacation from a theater job. My life just wasn’t about movies: I don’t think I ever chose a movie job over a theater job. I started in cabaret. I did Jerry Herman’s first revue in a club, and two revues of Julius Monk’s Upstairs at the Downstairs. And I had my own nightclub act. Like I said, I love vaudeville. I’ve always been interested in that kind of pure entertaining. I love to entertain people. I love to hear them laugh. I love the silences, when they don’t know what’s going on – though I must say that the silences in this play kind of scare me sometimes. I think, “My God, they’re so quiet, and they’re watching every move I make.”

Q: Or, they’re texting – lol – Millions of people know you from Roseanne. It was taped in front of an audience. Was the experience similar to doing a play?

A: No. The audience was there, but they were manipulated – laugh now, applaud now. So it’s not like a theater audience. It’s a completely different experience. You don’t have that long with a script. A good play is so dense that it takes you three or four weeks to figure out what you’re talking about. That’s never true in films and TV, which is cool because you’ve got to get up and do them, and there’s a certain fun in that – but not enough to make me want to do it instead of theater. It’s hard work in the theater. Eight shows a week of anything is hard work, and you give your life to it.

Q: Your character on Roseanne was allowed to develop over time, which must have been interesting.

A: Rosie seemed to love my work. She was always laughing at me. I think she was thinking up all kinds of crazy things to do to that poor mother. She was a lot of fun. We had a great time on that show.

Gay París: Oh, I bet you did. Roseanne really got me through some tough times in the 90’s, but that is fodder for another day. Garcon!?! Another champagne cocktail, please!