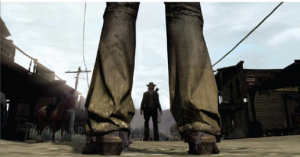 There are few games, that when they come out, you know are going to be huge. Grand Theft Auto3 was that game nearly a decade ago. Now, from thee guys that invented controversial gaming comes their magnum opus, Red Dead Redemption.

I can’t even begin to tell you about this game without comparing it to all the GTA games. Instead of stealing cars and beating up prostitutes, as a bad rip-off of every gangster you have ever seen, you are now the all American bad ass; out to save the Wild West your way. Rather than steal cars, its horses, and instead of beating prostitutes, it’s drunk gunslingers and other desperados you find out on the frontier.

Red Dead Redemption is actually a sequel to a game called Red Dead Revolver, which I have the misfortune of never playing. But, having not played the original game, I can understand this games storyline just fine. It is both rich and immersive, beautiful and runs very smoothly.

The one drawback is the size of the game. It’s a little too huge for me. Now, don’t get me wrong. I love exploring games. But when the cities only have 7 NPCS and there are countless game miles to travel, it gets a little tiring. Fallout3 pulled it off. But not every game is fallout3. Also, some of the controls are a little buggy, which

leads to some awkwardness going up stairs or through doors, but not enough to detract from the game play. Red Dead Redemption delivers. It has the graphics, rich story, deep characters, and if you get bored you can always just steal some horses and shoot up a town just like in the GTA series. There is also a multiplayer option, for those of you who just need to play the game online.