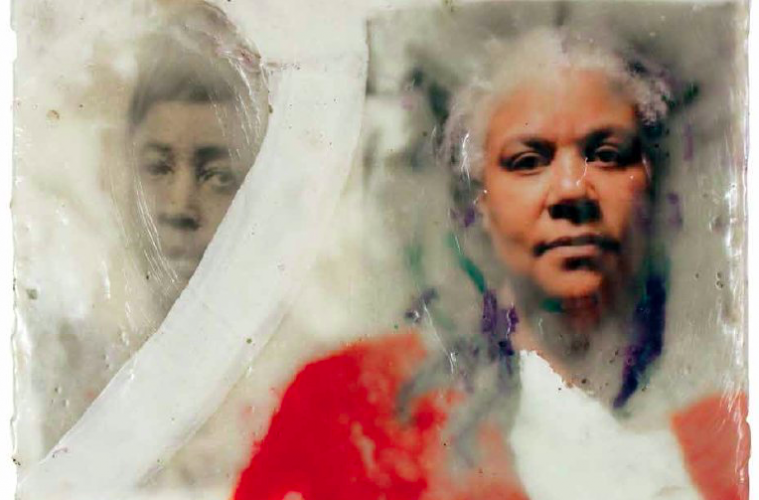 After taking a photo in front of Monument, 1988, the only painting by Gilda the DIA currently has on display (Katherine would inform me that the museum owns at least five), I asked Katherine if there are any other paintings she’d like to pose with and she leads me around the corner to a painting titled Hardball III, 1993, by Robert Moskowitz.

“I have a story about this one” she says. “One time Gilda took me here when I was very little, and when I saw that painting I burst out singing Take me out to the Ball Game real loud! Mom loved telling that story.” 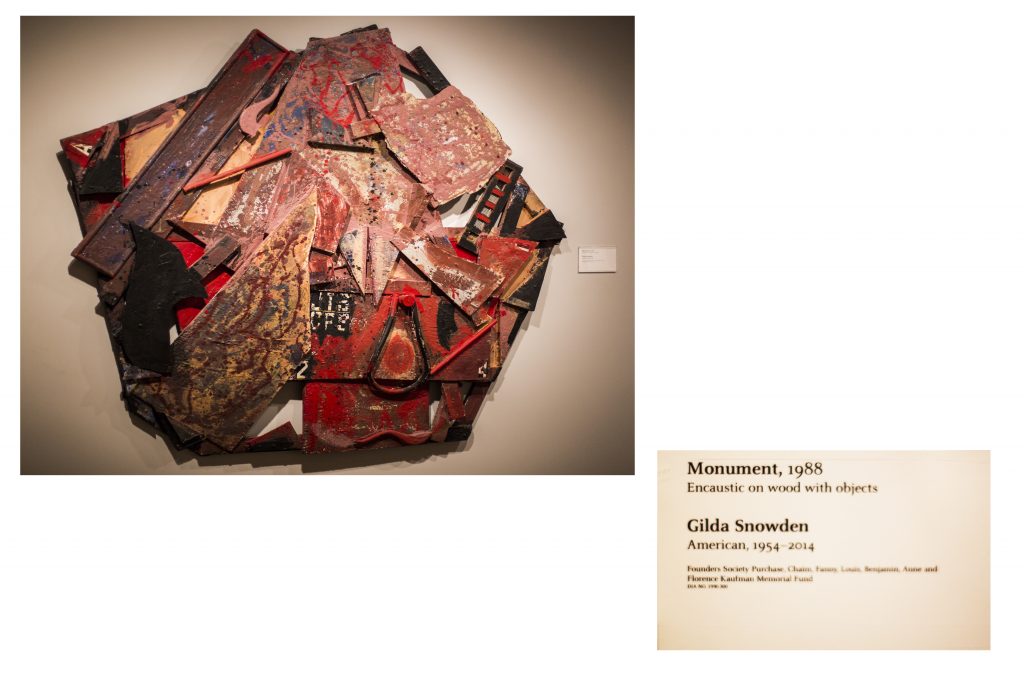 Formally known as the Silver Medal Exhibition, the Scarab Club (Detroit) has renamed the annual event the Snowden Exhibition (February 21 – March 31) after the Detroit-born painter Gilda Snowden. In honor of its launch, I invited Gilda’s daughter Katherine Snowden Boswell to share some insight on one of Detroit’s favorite artists.

“Well first and foremost she was Mom to me,” began Katherine (or Kate) when asked to describe her mother. “I’ve run into hundreds of her students who told me that she was their mentor. She was a person they could come to just to talk candidly about their problems; but for me, she was Mom. When she came home at the end of the day she put her stuff down, she made dinner for me, she worked at her computer, she helped me with my homework, so I knew her as mom. But, then I also knew her as this prolific artist, who at the time, because I was younger, I didn’t fully appreciate as much as I do now. Looking at the work she’s left behind it’s amazing that someone I thought of as ‘Mom’ was able to create a collection that she did.” 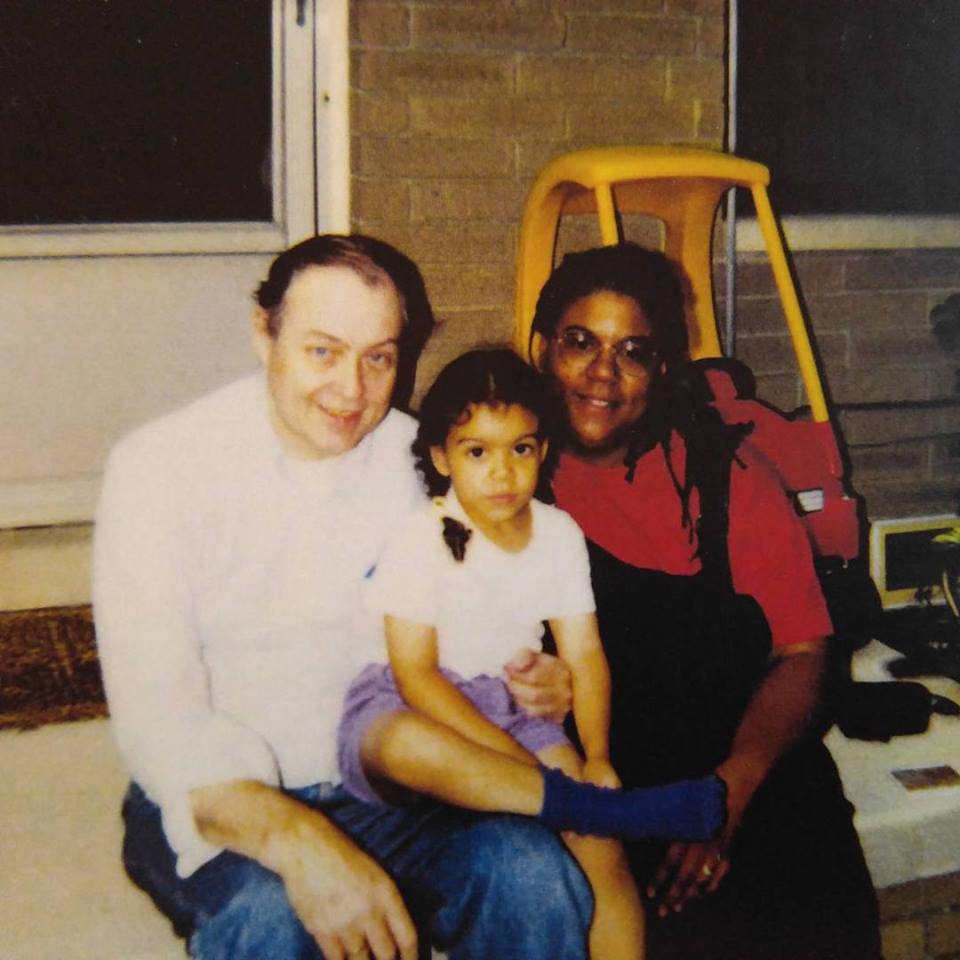 The first time I met Gilda was in the winter of 2013. I passed by in the hallway and her door was wide open. Someone I’d heard of, but only enough to know that she was significant, Gilda was mentor to my mentor, Scott Northrup, of the video department, when he was a student. Something was just so warm and inviting about her, sitting at her computer, as if she’d been waiting just for me, that I walked right in and sat down. Gilda and I talked for at least an hour.

A year later, I had the idea to add a Fine Art minor to learn the basics of oil painting before I graduated. I thought I could find it in me to be a painter, or at least take time to further sensitize my eyes to color and contrast. Within the first week of classes, I had the impulse to convince the photo department heads to allow me to skip a certain requirement for my Photography minor, in favor of taking a more advanced class later, and then transfer into Gilda’s Intro to Painting class. Although, the latter half of Gilda’s career was spent teaching the Experimental Painting class, she explained at our meeting that she would be teaching Intro to Painting for the first time in many years.

My plan worked and I contacted Gilda to meet her, get a syllabus and to talk about supplies, since at this point I had missed the first class. In our second conversation Gilda ran through everything I needed to know about supplies and the class. We sat and talked for at least two hours about art and everything. In only two conversations I felt like I had known Gilda forever; something I would discover she was well known for. I immediately set out to the bookstore, and then to Blick, and then the other Blick, on the way home and bought everything I needed.

I showed up on the morning of September 9th, 2014 with a complete set of brushes and a tackle box full of paints, only for the head of the Fine Art department to show up and announce that Gilda had passed away that morning.

Class was dismissed and I went right home and set up a cheap easel I had since I was a kid and painted a 2D sunset. On the side, when you turn it over, another sunset. In the remaining third of the canvas I painted a lunar eclipse; all in cool shades of blue and green contrasted with the red and orange of the three suns. I titled it: “My Mentor’s Mentor”. 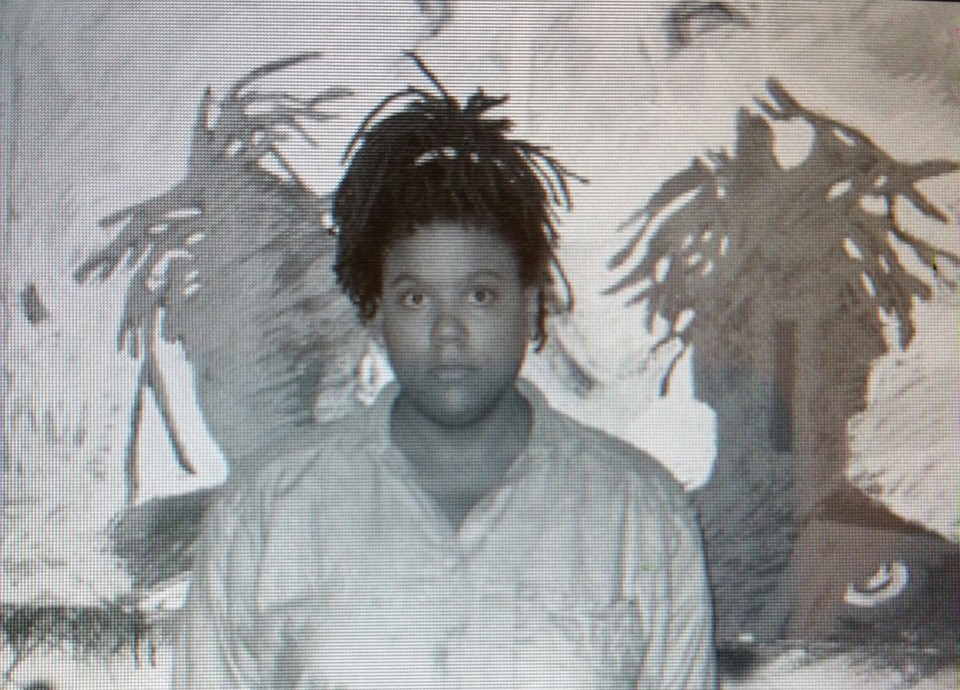 “Me and my mom were best friends, we did everything together,” Kate continued. In the 1970’s Gilda experienced a car accident that left her too afraid to drive. She was dependent upon her husband William Boswell to drive for her ever since. Days after getting her license, Kate couldn’t wait to surprise her mom, and took her dad’s car to pick Gilda up from her studio.

Some of Kate’s fondest memories and most important details of her mother include her being an avid bibliophile, who read from an encyclopedia set she had as a kid. She continued to read anything she could get her hands on and later used her knowledge to answer every question on Jeopardy!. Gilda also had to have all the latest gadgets and had a long-running tech rivalry with Chido Johnson, the CCS sculpting teacher. As a well read woman, Gilda read stories to Kate from ancient history and always told Kate that she was wise and an old soul.

Katherine received her BA in Classics from Wayne State with a focus on Roman History, and is currently working on a double Masters in History and Library Science with a certificate in Museum Archival Administration. Gilda left behind a collection of an estimated four thousand pieces, which includes paintings as well as sketches, digital photos, videos, and writings. The experience of organizing and cataloguing this massive collection has inspired Kate’s choice in a Masters program, hoping she will be able to do the same for future artists.

Kate has dabbled in photography but never really felt the need to pursue art as a career. Gilda encouraged Katherine to explore art and consider CCS, but looking back, Kate has always appreciated how Gilda never attempted to pressure her into being an artist. Instead, she stepped back and let Kate decide for herself while offering support.

When Kate chose Wayne State she initially enrolled in Asian Studies, being quite the Otaku in high school. This all changed after taking a Greek Mythology class as an elective. She switched her major to Classics and settled on Roman History, basing her writing intensive on Rome’s transition from republic to empire: the time from the assassination of Julius Cesar to the crowning of Augustus as the first emperor.

In 2015, the Kresge Foundation introduced The Gilda Award: $5,000 for “artists who are early in their artistic career, are gaining momentum and who demonstrate exceptional potential through creative risk-taking and pushing the boundaries of their chosen art form.” The Gilda Snowden estate has been turned into an LLC with Katherine, Gilda’s husband William, and Gilda’s sisters Donna and Myra Snowden working hard to prepare the collection for museums, shows, and for sale to perpetuate Gilda’s legacy.

Sometimes Katherine would come to CCS and hang out with her mother in her office. Students would visit while Kate sat in the corner doing her homework. Looking back on some of those conversations, Kate remembers how Gilda was one who really connected on a personal level, someone who really listened.

I remember September 9th, 2014; I remember people hugging and crying in the hallways, posting on Facebook: “This is so hard, I loved you.” I remember people saying, “Gilda was the type of person you thought would be around forever.”

Gilda Snowden has left a permanent mark on Detroit. She is a beloved figure who deserves every bit of recognition as Joe Louis, Eminem, or Jack & Meg White. More important than the massive collection of art she’s left behind is Gilda’s legacy of students, and the many artists she’s inspired throughout her life.

“A Force of Nature,” is what her family called her. “She just wanted to help people.” It’s surreal to Katherine that her mother is someone so significant to the rest of the world; an artist with awards and exhibitions named after her, who could walk into to John K. King and pull out a stack of books in which she is featured.

“I’d come home, she’d cook me dinner, she’d help me with my homework, we’d watch Jeopardy! at 7:30, she was a legitimately important person to a lot of people, but to me she was just Mom. 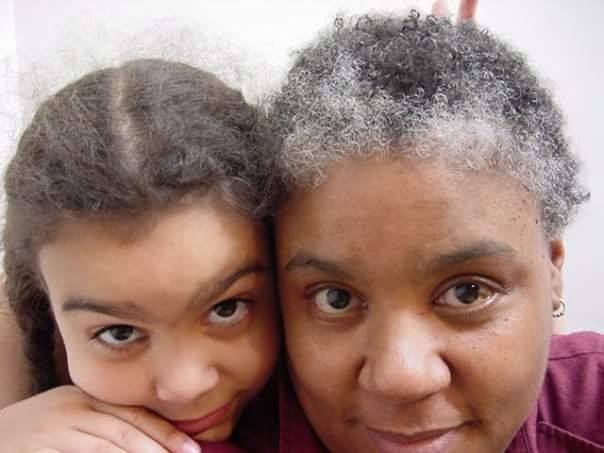 Gilda Snowden: the Detroit-born, Kresge Award winning abstract impressionist, graduated from Wayne State with an MA and an MFA in Painting and then taught at the College for Creative Studies in Detroit for 31 years and for a number of those years served as the head of the Fine Arts department; who just recently passed away on September 9th, 2014, leaving behind a legacy not only in her art but in the personal impact she had on her students and on her community.