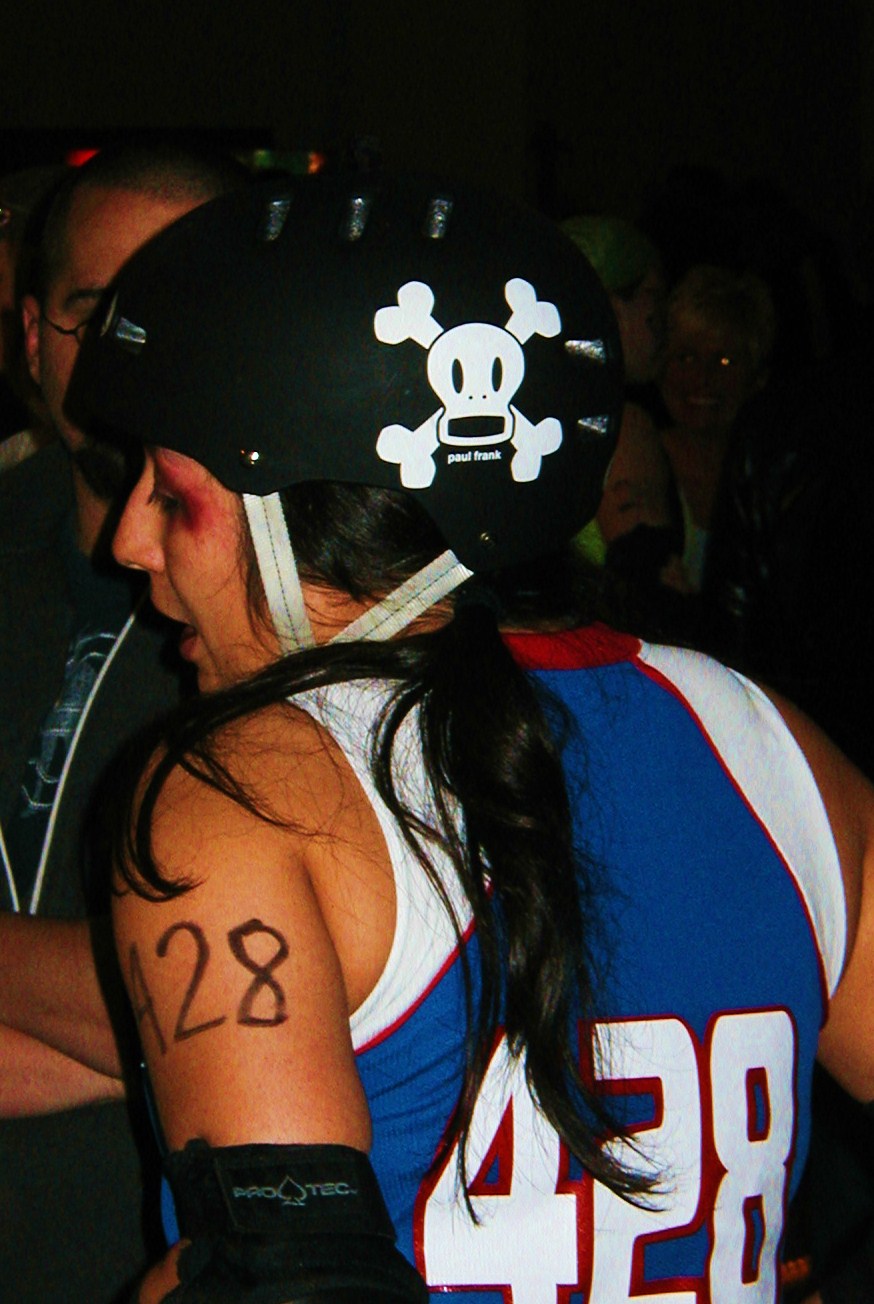 Rollin’ with the Detroit Derby Girls

I was sitting in my parents TV room in 1978, playing with Micronauts and sporting a Dutch Boy hairdo, pimping my baby blue Star Wars pajamas, while my sister Lisa colored in a Gingham Girls book and my brother Dave broke the arm off another defenseless Big Jim doll. Dad sat in his recliner smoking non-filtered Pall Malls and literally clicked the remote control as he channel surfed. Not a damn thing was on other than news and that depressing Suicide is Painless song from M.A.S.H.

But then, all of sudden, there it was in full color; 12 inches from my seven year old eyes, women on roller skates wearing uniforms and beating the hell out of each other. It was Wonder Woman, Charlie’s Angels and the Bionic Woman all wrapped into one, with a touch of The Wide World of Sports just to make it official.

The room was transfixed; no more coloring, no more toy breaking, no second hand smoke to unsuspecting kids. Here, in our little TV room in Bay City, we were watching the International Roller Skating League. It was a spectacle. We sat there for an hour  watching the orchestrated mayhem unfold from teams like the Brooklyn Red Devils and San Francisco Bay Bombers.

The show finished and it was off to bed. With not much sway on what should have made the Tv screen, the roller derby girls rolled out of my young life forever. Or, so it seemed.

A few weeks ago, I’m heading down Woodward Avenue with my brother, Dave “The Mangler”, and a long time family friend, Paul “The Polish Assassin” Krzysiak. The excitement and anticipation in the car was full throttle as we grew closer to the location where sheer madness awaited.

Upon entering the hall, where estrogen filled the air with enough strength to decimate any amount of testosterone that dared get in the way, it was clear no quarter would be given to the fool who dissed Detroit Derby Girl character or questioned female authority.

The goddesses that inhabit this dizzying, highly accelerated circle of blood carry monikers such as Vicious Vixen, Ghetto Barbie, Black Eyed Skeez, Vega Vendetta and Bruisse Siouxx. To speak their mortal names, in their arena of anarchy, is not a good idea. These femme fatales roll hard, heavy and deep. Though, they are all members of a perfectly chromed, competitive cult of chaos they belong to separate factions; Detroit Pistoffs, Devils Night Dames, Pistol Whippers and D-Funk All Stars.

The Detroit Derby Girl scene is a well-organized finely tuned machine. What it isn’t is a bunch of women, skating in circles, simply knocking each other over with choreographed elbows to the face and chest area. Roller Derby has a list of rules and regulations, each team has a manager, team captain and specific positions like Jammer, Pivot and Blocker, with all bouts officiated by referees.

A night of roller derby includes vending tables, merchandise, cold Pabst beer, hot dogs and athletic women, banging it out. The vibe is cool and retains the tough, hardworking, Detroit image this sports town is known for. The players are approachable for autographs and pictures after the bout, which makes for a great night of family fun.

With backbones of iron and a will of steel, these Mademoiselles of Mayhem show true determination, in a current of grace and fluidity. Derby girl beauty walks hand in hand with the blue, green and purple bruises they proudly display on their legs, arms and eyes, and these women consistently put on one of the best shows this town has to offer. The Detroit Derby Girls have made their mark and are here to stay.