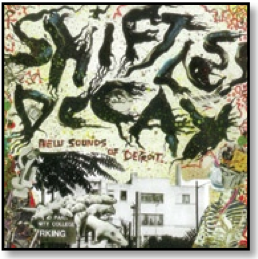 According to the liner notes, written by Scott Dunkerley, Shiftless Decay “is” the context “we”, as a region, must face on a daily basis” Apathy, neglect, fear, greed, desperation and the fact that, again, according to the liner notes, “half the people living in the central city are functionally illiterate” are the facts and emotion that define it.

Dunkerley continues, explaining that “we are the only major metropolitan area without a mass transit system, we’re the murder capital on and off” and that “unemployment recently rose above 10%”

He writes about the “racial separation” that defines our area, the mess that is the central city public school system and the city government trapped in an entangled web of corruption.

But, Dunkerley believes, that it is the people “ creatingand acting on their own terms” who will be the ones responsible for realizing the “new visions” to help move us forward. One of the ways this will be achieved is through music, “because the fact is that Detroit area culture is one of the last attractions we have going as a region”

I’m not sure if I hear all of this political and social commentary, within the scope of the 12 tracks offered on the 2009 release, but I do recognize the influence of, what is by now, an all too familiar cityscape continuing to force its way into our music.

With tracks by Tentacle Lizardo, Human Eye and Terrible Twos, Shiftless Decay is a loud and raucous, stripped down and beaten up, slice of Detroit Punk Rock City circa 2005-2009, somewhat resembling the late 70’s LP, Burning Ambitions, which captured much of the punk scene coming out of London at the time. Other artists include Johnny Ill Band, a mesmerizing blur by Little Claw and a hypnotizing end trip through the ‘Gum Coup Follicle” by Odd Clouds.

Though, the content of Shiftless Decay probably won’t repair any of the damage its producer passionately rails against, it just might have kids in London, Berlin or Tokyo dreaming of the far off desolate lands, of dark frustration and raw amplification, known as Detroit.