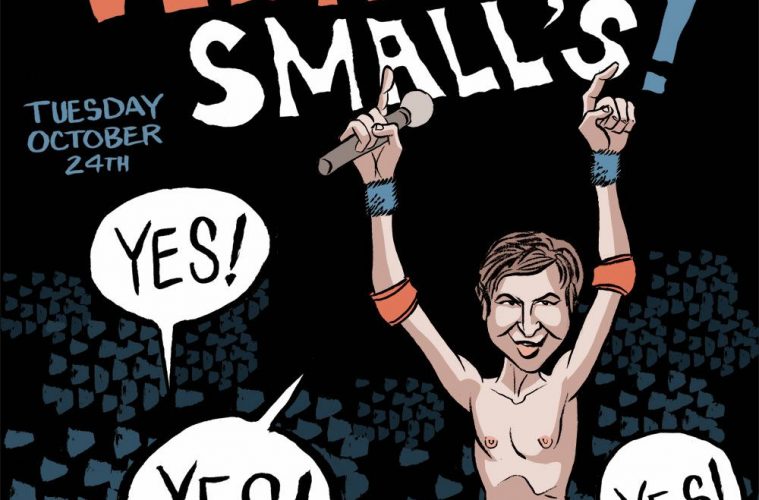 I moved to Detroit around a year and a half ago (clearly to gentrify it) and around that time local favorite Brad Wenzel had just appeared on Conan for the first time and was preparing to move out to LA. Before he left town, Wenzel had a going away show at Small’s bar in Hamtramck hosted by Ray and Laura, who for the past three years have been putting on an amazing monthly stand up showcase. This week, Wenzel returns to Small’s in preparation to record his first comedy album.

If you’re a fan of watching comedy on Netflix and have yet to see a live show this would be the one to see. I can’t stress how different watching live stand up is compared to what you can see online. No flying shots over the crowd laughing, no overly produced specials or spliced together bits that hardly worked, just raw stand up comedy in a dive bar, where it belongs.

To me, Brad seems to be the hometown hero who put in a lot of hard work, is fucking doing it.

Seeing Brad’s farewell show last year made me realize how amazing the Detroit comedy scene is. His show was a lightning round of comedians given 1 minute of stage time and paid a nickel out of Brad’s wallet, er… coin purse. A nickel may sound insulting but I bet every single comic who was on that line up still has that envelope and remembers that night fondly. 1 minute of stage time and 50+ comics is fucking absurd. Just as absurd as everyone being brought on stage to a pro wrestlers intro song, which I still don’t understand, but I loved it. 50+ comics, hyped up wrestling music, holy shit it was a great night. At the end, Brad closed out the show by doing some new material along with the crowd requesting their favorite Wenzel jokes. If I remember correctly, Wenzel ended up on Ray’s shoulder like the fucking champ he is.

What struck me as being so special about the show and success of Brad was that everyone was so supportive, proud and no one seemed to be bitter. It felt like a room full of mother’s watching their son get married or poop out a baby. Yeah, that analogy doesn’t really make sense at the end but I bet in the future men will be able to poop out babies.

I guess what I would’ve expected is comics being envious of one of their own moving up to the big time. Comedy is a strange beast. Saying I’m not jealous would be a lie, but its not jealousy in a way that I think I deserve his success, cause I definitely don’t. But its jealousy in a way that I wish I could have a spot on Conan or be advised to move out to LA and get an agent. Right now I’m only being advised to put my ‘things up on ‘Youtubes’ by my mother. Which, damnit, you’re half right Maw. I guess for myself I’m so happy to be in a budding comedy scene that is happy to see each other succeed.

The shows doors open at 8pm and its only $5. That’s basically free to see a national headliner and opening the show will be Ray Hollifield, Laura Witkowski, and Mike Szar from Toledo Ohio. Come out and support live comedy.