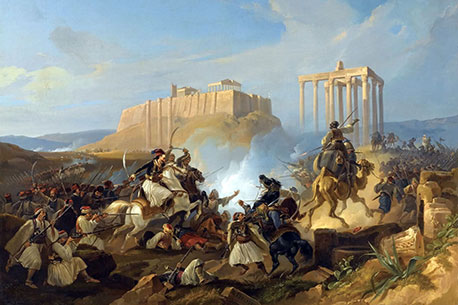 Battle scene of Greek War of Independence by Peorge Perlberg

Open House at the Hellenic Museum of Michigan, Friday, April 17

The Greek Community of Metropolitan Detroit will celebrate their 14th Annual Greek Independence Day on Sunday, April 19, 2015, with a parade in downtown Detroit. The parade will start at 3:00 p.m. and will proceed on Monroe St. from Woodward Ave. to the heart of Detroit’s Historic Greektown. 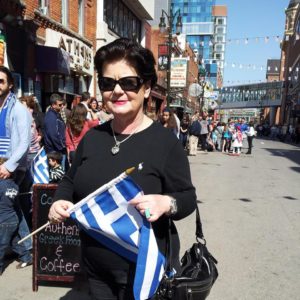 ox Metropolis of Detroit, George Reganis, the Detroit Greek Parade President, Grand Marshal Philip Frangos and the 2015 Hellenic Heritage Award Recipients. “Each year the Greek Community awaits this annual parade with great anticipation, excitement and pride. It is a demonstration of the legacy of Hellenism and the preservation of the Greek culture”, said Metropolitan Nicholas. Dignitaries including representatives of local, state and federal government will also join these officials.

The historical Greek lands, including parts of Asia Minor that are now Turkey, had been under the rule of the Ottoman Turks since the fall of Constantinople in 1453. For 368 years, the Ottoman Turks governed the Greeks, subjecting them to brutal slavery, oppression, and arbitrary tax burdens; the glories of the ancient past were gone. But inspired by the examples of the American and French revolutions, Napoleon’s victories, and the Latin American wars of liberation, the Greek people rose up against their Turkish masters in 1821.

In the early 1800s there were stirrings of dissent and belief in the possibility of gaining independence in different parts of Greece, including Constantinople, the seat of the Greek Orthodox Church and home of the Greek merchants who were a powerful economic force (the Ottoman Turks thought it was beneath them to engage in commerce, thereby allowing a void to be filled by Greeks and others.). An underground movement for freedom was developing throughout the Greek world. The economically powerful Greek families of Constantinople thought they could affect a takeover without engaging in physical battle, but others were ready to fight.

Legend tells us that the Greek war for liberation started on March 25, 1821 when Bishop Germanos of Patras committed the defiant act of raising a white banner with a blue cross at Kalavrita in the Peloponnesos. Bishop Germanos administered an oath to the freedom fighters whose rallying cry was, “Ελευτεριά η θάνατος” “Freedom or Death”. A long, bloody protracted war followed.

At first the Western powers were reluctant to intervene. While their governments hesitated, philhellenes – young aristocrats who had received a classical education and valued the ancient Greek civilization – were supportive of the fight to liberate the descendents of that civilization. Among the philhellenes were Lord Byron, Goethe, Victor Hugo, Alfred de Musset, Schiller, and Shelley. In January 1824, Lord Byron went to fight at Messolongi, an important center of resistance, where he died of pneumonia three months later.

Western powers finally intervened in the war. A combined Russian, French, and British fleet destroyed a fleet of Turks and Egyptians at Navarino in the Peloponnesus in October 1827. On September 14, 1829, Sultan Mahmud II was forced to accept Greece’s independence by the Treaty of Adrianople. In 1830, the protocol of London declared the independence of Greece. That action signified that the new nation of Greece was recognized.