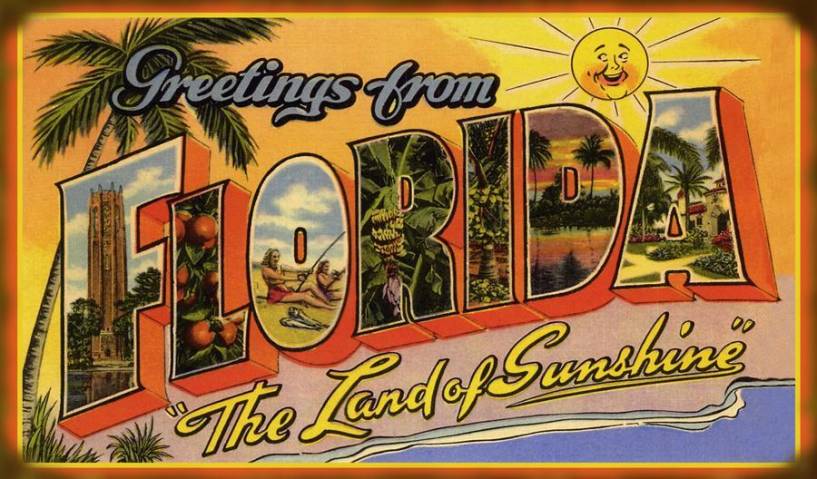 THE ALL AMERICAN ROAD TRIP

Or, How I spent my time in Florida

The scene was set. 7am we roll out of the driveway. IPods updated. Books selected. Handheld games, well, in hand. Time to drive. Only 22 hours separated us from the Mecca of all things Americana. You never win a super bowl and go to cedar point. You go to Disney world – and that is exactly where we were headed.

Mom, Dad, three younger brothers, my wife and I all crammed into the minivan ready for adventure. Excitement and exhaustion beat down from little sleep the night before – You can’t sleep with that much excitement in the air. Still, Mom and Dad had no time for coffee – we were off.

The only way to get from the great peninsula of the north (Michigan) to that wonderful tropic peninsula of the south is I-75. The first hint of trouble came from the onramp. Not even fully on the freeway and my 2nd brother feels that it is the perfect time to get carsick. Welcome to vacation.

The tone was set. It’s a frantic whirlwind of omnipresent boredom and lethargy as we slowly watched our trek through the northern states. Michigan, Ohio, Kentucky, finished. It was too smooth. Nothing is ever that easy. The state line of Tennessee is where we had another come apart.

Inside jokes had been invented. Bonding had happened. Songs were sung. The youngest brother of mine decided that, though he could not understand the jokes, it was crucial to participate in them. Upon hearing ‘the bird is the word’ too many times, he finally let it fly. All we could do was stop and stare, along with the entire Tennessee rest stop, as this massive level of commotion, song and dance, spewed forth from a kindergartener, alone in the minivan.

Time to go. Time to sleep. ‘Back on the road again’. Again, there was no time for coffee, as if we had a time limit to get to the next state. Hours felt like weeks. Technology lost its charge and we were stuck watching the trees race by as we barreled down the freeway.

The promise land was finally reached. Mass excitement filled the little cabin of the minivan. Hearts broke when we heard there was still four more hours to get to the rented condo. This was quickly followed by traffic jams and tollbooths. Don’t worry; it will all be over soon.

Sweet arrival. The gauntlet was over. X marked the spot and by God we made it. With my last breath before passing out I wish my wife a nice evening and slipped into a dreamy oblivion swirling with images of what Florida was about to show us.

Time to go. No time for coffee this morning. Onward, to the sea-tattered shores of Typhoon Lagoon, where thousand foot waves crash into you as overfed parents and their equally overfed children sputter and scramble to remain afloat – always with the fear that someone other than you is urinating in the pool, and always with the thought in the back of my head, “Yea, I bet you wish you put on some sunscreen, don’t ya”.

There are no words for the pain I was in. No words. All the fun in the sun had left me a charred piece of human jerky. There was no sleep to be had. Submerging myself in a pool of aloe was just a cruel joke, but at least I was nowhere near as bad as my younger brothers.

Wake up the next day. ‘Time for coffee?’ No. Not this day. It was Disneyworld day; the single most magical day in your life – when you’re pre sixteen. Back into the minivan, stinging from awful sunburns and tired from 4 days without a drop of coffee. Time to meet the mouse.

Disney world. The American Dream. The all-American family road trip. Everyone has gone on it and will continue to do so forever – It is our way – as massive lines and overbearing sun beat down on you while you watch countless tourists shuffle by, looking for that last ride, last souvenir, last sugar-coated, deep-fried Crisco ball to consume before the lines build up again.

Ten hours and two rides later, it was dark enough to watch the fireworks. My blood-caffeine level has never been lower and after 2 full days in direct sunlight I can barley wear a shirt without eye-gouging pain shooting through me. Time to relax and enjoy some of the best use of pyrotechnics this side of Asia.

Two words. Two words are all it took for the shitstorm to hit. Those two words haunt me to this day, destroying my own dreams that one Jiminy Cricket promised would happen if I believed in myself and got good grades or something.

I couldn’t believe it. The youngest of our group was… sick of Disney world? This is the strangest thing I have ever heard. But like that, it was decided (against the group) that it was time to go. No fireworks, No light parade, and no cheap light up sword. I have never seen my father run so fast to “beat the crowd” that was miles behind us and enjoying the fire in the sky.

There are rumors that carriages were knocked over, rumors of old ladies being pushed out of the way and even one rumor of punching a giant cartoon mouse in our mad dash to keep up. Whatever may have happened, I cannot say.  Some memories are too painful to dig up.

Condo. No sleep tonight. Burn still hurts too much, like flaming knives digging into me. Wake up. No time for coffee. The Beach. Now the true vacation can begin. Bikinis, waves and cocktails. This is what I’m used to. This is what I was looking for.

Venice Beach, Florida; shark tooth capitol of the world. Wade out ten feet and start digging in the sand. You WILL find them. You will also have to dodge cranky jellyfish, as they love to attack people, especially my father.

Beachcombing is surprisingly rewarding. When you find that perfect shell it feels as though all is right in the universe. But, all too soon, we had to go. Oh, the dread of seeing that damns minivan again.

7am we roll out of the condo. IPods still dead, sunburns killing our backs as they stick to the seats. As always, no time for coffee. We were done; Florida was behind us and nothing but frantic obscurity lie ahead. As I sat there, crammed to the gills with souvenirs, snacks and bodies, I thought to myself “what was I thinking. That was total madness. Thank God we’re going home.”

Would I do it all again? Hell yes. The memories and stories are worth the weight of salt we absorbed from the ocean. Florida, you never cease to amaze me. ‘C’ you real soon.