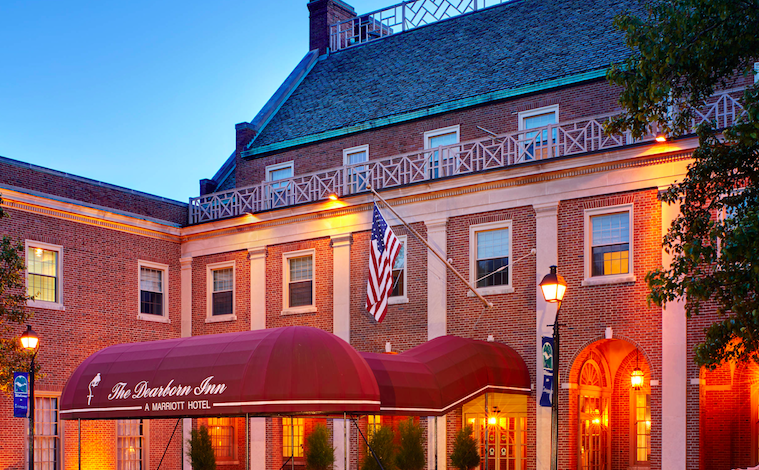 Some time in 1930, as the story goes, Henry Ford was watching travelers arrive at the Ford Airport on Oakwood Boulevard in Dearborn. He realized there was nowhere for the passengers to eat or sleep closer than Detroit. Ford decided he needed a new hotel to serve those visitors. So, Henry Ford commissioned the famed architect, Albert Kahn, to design the world’s first airport hotel, the Dearborn Inn, across the street from the airport. The Inn was built to demonstrate what Henry Ford thought a modern hotel should be. Ford’s love for Georgian architecture took second place to his love for transportation but, in the Dearborn Inn, he combined both.

Albert Kahn designed a striking Georgian-style inn, located on a 23-acre site on Oakwood Boulevard. The Colonial Revival style of the inn was in harmony with the nearby Edison Institute. And, the inn’s décor was in the Early American or colonial style, which was favored by Henry Ford. Ford admired the hospitality of New England and southern inns and he wanted to bring the same old-fashioned warmth and personal service to this restful, red brick and white trimmed building.

Mr. Ford took an active part in the design of the Inn and personally oversaw the development of many of its charming features, such as the Alexandria Ballroom, which is similar to a room he admired in Alexandria, VA. With great fanfare, The Dearborn Inn opened for business in July of 1931. The first person to sign the guest book was Henry Ford himself.

In those early days, one could enjoy a nights lodging for $3.50. Visitors took their evening meal in the Early American Room, where the traditional American offerings were delicious and merely $1.50 an entrée.

In 1937, The Inn was expanded with the construction of five historic replica homes in a Colonial Village setting. With painstaking attention to detail, architects and crews reproduced the homes of Edgar Allen Poe, Oliver Wolcott, Barbara Fritchie, Walt Whitman and Patrick Henry. The original homes were duplicated with exacting precision, from the building materials to the interior decors. The original plan called for 18 historic homes in the Colonial Village, but World War II put a halt to further expansion.

In 1983, both the State and Federal Governments designated the Dearborn Inn as a National Historic Site.

Today, the Inn is owned and operated by the Marriot Corporation. Times and prices may have changed but all one needs to do is step inside The Snug, which sits right off the Golden Eagle Lounge, to get a feeling of what life was like all those years ago. Dark oak woods, copper bar counters, stained glass windows and an intense feeling of history inspire by inviting guests to enjoy cocktails and conversation as Ford once did himself, although, then a Men’s only affair. And, the red velvet billiards table is available for ladies and gentlemen to help pass the time.