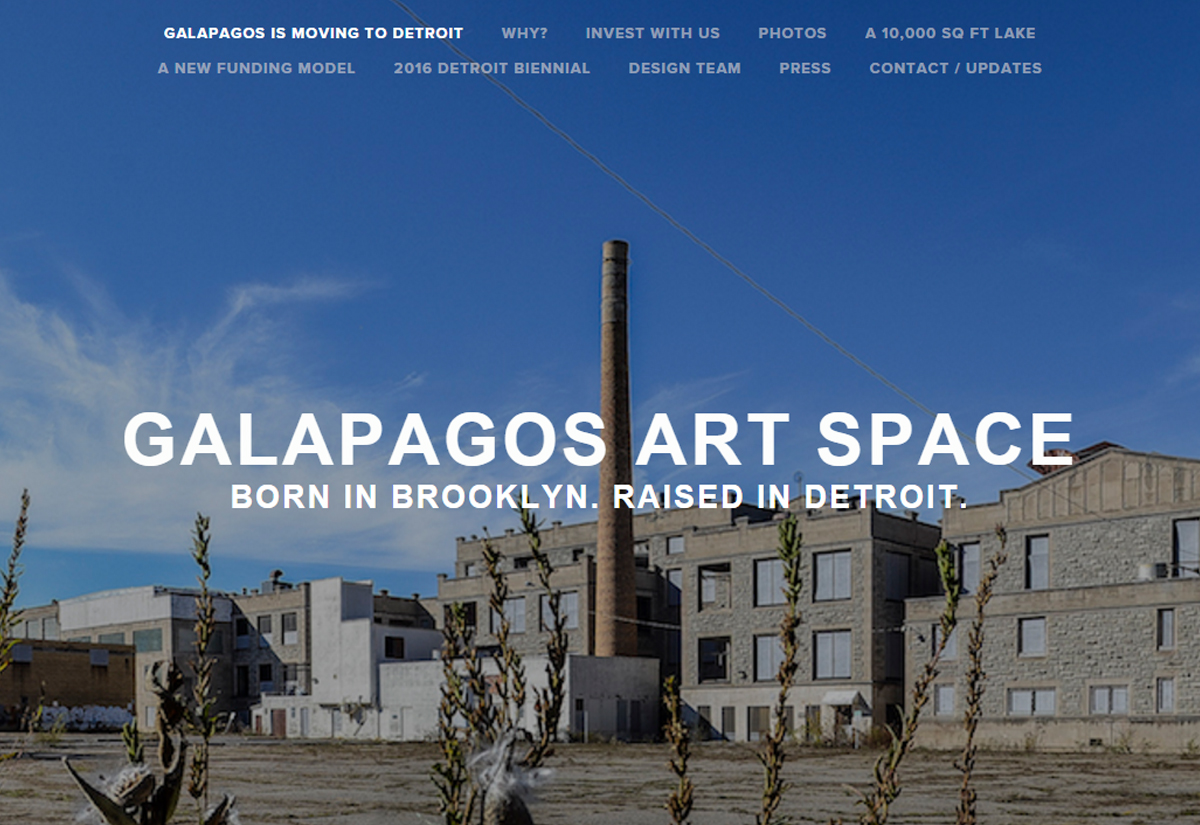 A new cycle will start soon; there will be much fanfare, many reporters and social media will be abuzz, and there will be lots of art to check out and lots of people to see. The guests will arrive in their Mercs and their Priuses, wearing their best attire. Almost no one will walk—that will seem risky at this time of day, and in this part of town. To some, this juxtaposition will feel a bit odd, as this area has not seen the art crowd, and the art-collecting crowd in many years, if ever. But who cares, when there is this much anticipation?

It will be the simultaneous opening of a new art venue, a party to mark the relocation of a well-known Brooklyn art institution and this very organization’s launching of the city’s first art biennial. According to professor Wikipedia, ‘biennial’ is a word that describes: a) an event that happens every two years and b) something that grows, blooms and dies within that same time period.

Detroit’s shiny new recurring art exhibition will be hosted in a large former factory, bought and refurbished by the organizers. It will feature over a hundred artworks by as many artists in a self-advertised “ambitious survey of the new and important work being produced in Detroit.” The roster will have the best of the best: it will almost entirely consist of Cranbrook and CCS recent graduates, as well as some big names that came to the city to produce a big project. (A nice chance for the former to milk the latter). There will also be “filler” from the less prestigious colleges and maybe just a sprinkling of the uncategorizable “outsider” types.

What we have so far is a hypothetical worst case scenario. The actual Detroit Biennial is indeed planned for this year, organized by Galapagos Detroit and slated to take place in, presumably, a revamped Highland Park factory. Formerly, Galapagos was an innovative and well-respected alternative art space in Brooklyn. Yet, there are already mixed emotions about Galapagos’ arrival to the city and their adventures in real estate. Several skeptical articles have been written on the matter. These feelings should come as no surprise, given the goings on in Detroit’s real estate, the highly visible decline in Highland Park, and the general tendency of artists and photographers to come and exploit the state of things for their own projects.

Of course, there is nothing inherently wrong with outsiders moving their operations to Detroit. In the current art climate and its many fairs and festivals, this type of event should help establish Detroit as the art destination it is purported to be. In fact, this is what Galapagos helped achieve in its hometown. But for that to happen here, it will need to be done just right. This biennial should not have the whiff of exclusivity or the self-serving, pretend socially-responsible vibes of the international circuit of biennials. In the long term, the space also should not speak about the city’s struggles while causing nearby residents to leave due to the escalating prices—the latter is also something that Galapagos inadvertently helped do in Brooklyn, and it had to leave for that reason. That is the cycle that was alluded to in the beginning.

So, if there has been little talk of the actual art it is because these issues in the background can easily derail the whole thing. In other words, Galapagos have a balancing act to do. I really hope they don’t drop the ball.