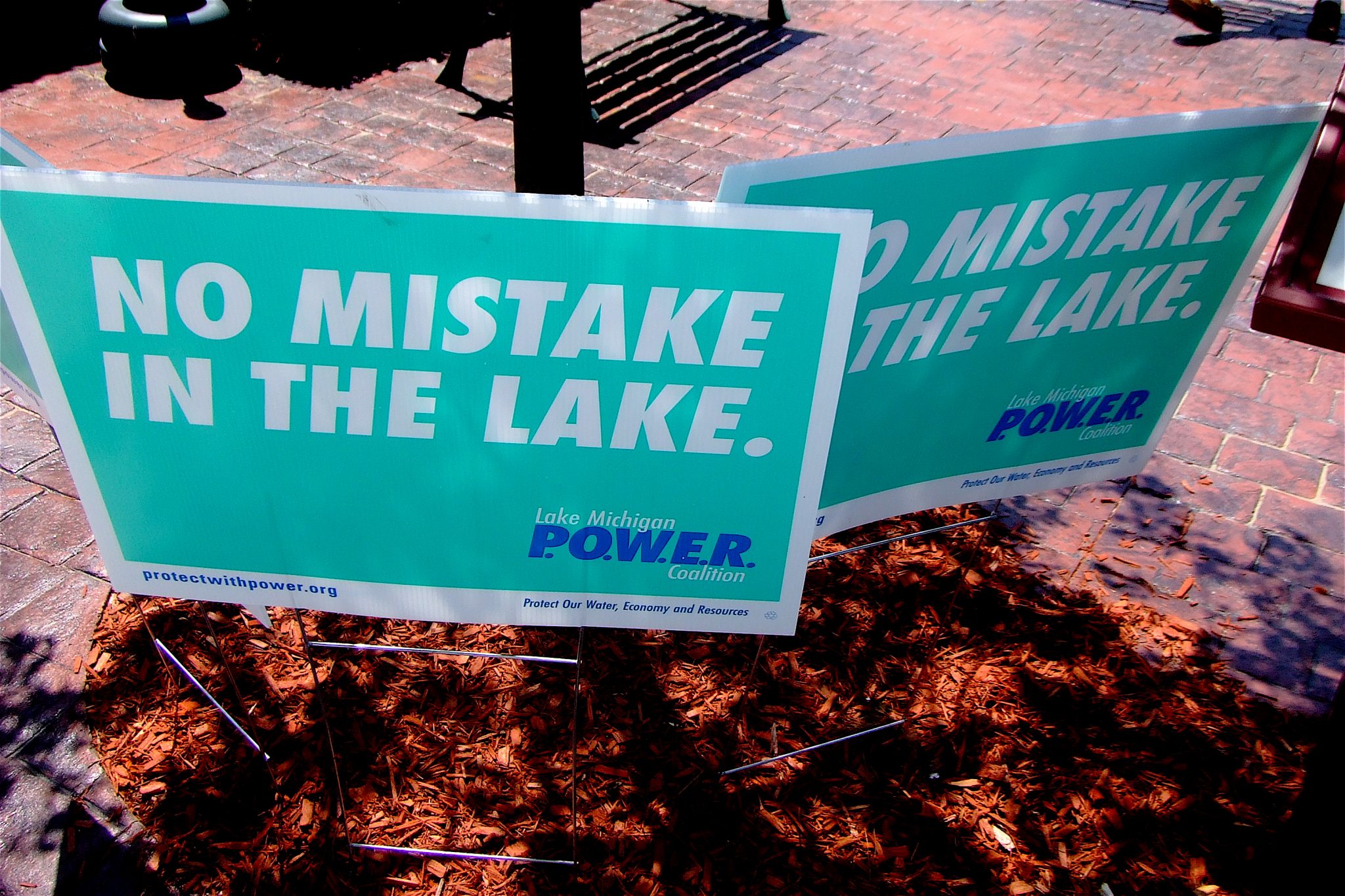 P.O.W.E.R. Says ‘No’ To Wind Power In Lake Michigan

No Mistake in the Lake

According to the coalition, “through education, research and public dialogue” they will work with elected officials to protect Lake Michigan and surrounding communities while encouraging safer, more efficient, clean energy solutions and jobs for Michigan’s future.

“First and foremost we want to protect Lake Michigan,” explains a leaflet currently distributed throughout Oceana County, Michigan. “We believe Havgul-Scandia, or any entity proposing wind power plants in Lake Michigan, must be held to the best available technological standards in construction, operation and decommissioning.”

“Any technology used throughout the lifetime of offshore wind factories must be thoroughly demonstrated to be safe, reliable, cost effective and nonpolluting prior to permitting. All phases from zoning, to construction through decommission, must be in compliance with the best available scientific standards and federal, state, and local laws and regulations relating to the long-term safety of our water, economy and environment.”

“Wind developers must demonstrate the proven financial ability to undertake the project as well as pay for any damage to the lake’s ecosystems, shoreline, and all decommissioning expenses.”

So, what happens when Havgul-Scandia produces scientific data, complete with charts and graphs, in brilliant power-point, to those elected officials P.O.W.E.R. promises to “educate” through research and public dialogue?

What if there was competitive bidding?

Not sure. The coalition doesn’t say.

But, it does provide a number of environmental concerns:

1. Lake Michigan and its associated dune and wetland ecosystems are a unique ecological resource – one of our state and nation’s greatest national treasures. Many millions of taxpayer dollars are being spent to restore our Great Lakes – most recently 10 million to restore contaminated Muskeegon Lake, one of many federal areas of concern.

2. Industrial power plants in the midst of this fragile freshwater ecosystem could degrade or destroy vital habitat for migratory birds and other pollinators, bats, waterfowl, fish and other marine life. Bats, for example, are susceptible to death by barotraumas.

3. Each turbine contains up to 200 gallons of lubricant – what would happen to our lakes if there were a leak? How would a turbine be repaired if ice caused it to malfunction?”

They got ya there, Havgul-Scandia. What about the bats and lubricant?

And, then there are Safety Hazards: “The projects pose a potential risk to the thousands of recreational boaters who use the local harbors for their livelihood and leisure – a possible accident waiting to happen.”

And, in the summer tourist town of Pentwater, Michigan, where I discovered the P.O.W.E.R. leaflet, those concerns seem justified. With a population of only 857 the village relies on tourism and those who head to summer homes, mostly from affluent southeast Michigan and Chicago, IL. for their livelihood.

In an article by Richard A. Kessler, published January 28, 2010, a Consumers Energy spokesperson also cited concerns about “ice in Lake Michigan as a reason NOT to install wind turbines there”.

Apparently, winter ice flows are a concern that could potentially lead to wind turbine failure, or worse.

And, then there is Aesthetic Pollution.

“Each of the two Aegir projects represents an expansive industrial complex of 50-100 5MW or 10MW wind turbines, which could each reach more than 500 feet tall, each project covering a 50 mile square area – each project larger than the city of Grand Rapids. Anticipated safety devices such as FAA required flashing lights, as well as Coast Guard required lighting and fog horns would cause visual, noise and light pollution, with turbine hubs (nacelles) as big as a bus on 5MW units.”

Fair objection. Lake Michigan is a beautiful destination that could suffer immeasurably from an unsightly horizon. Who wants to sit on the beach and stare at a hundred, 500-foot windmills, blocking one of the most enjoyable sunsets in the world?

On the backside of the leaflet, Lake Michigan Power Coalition addresses the Economic Effects of these proposed turbines in the following:

“Locally, we could be faced with tremendous economic losses for fishermen, tourism and other businesses, and a loss of property values and the tax base for the region. Because of the high cost of constructing, maintaining, and decommissioning offshore wind turbines, wind generated electricity is extremely expensive.”

“The proposed projects would be a net cost to the public, as its developers would receive many millions of tax dollars in government per kilowatt subsidies. A NY Times, April 26, 2010 article states, ‘the current price tag for a fully installed offshore wind system is estimated at $4,600 a kilowatt, nearly double the $2,400-a-kilowatt price for a land-based wind system. Production tax credits and other incentives have driven the cost of land-based wind power to less than 5 cents a kilowatt hour in some places, and that’s still more expensive than other sources like coal and hydropower.’”

Sounds a bit suggestive, like wind turbines might be fine – at 50% less cost – so long as they are inland, where other communities can deal with the “Aesthetic Pollution”.

But, maybe, I’m just being cynical.

“Wind energy DOES NOT replace coal, hydropower, or nuclear power plants. Wind is intermittent and requires cycling of reliable sources to compensate for its lack of consistency. Michigan DNRE is currently considering permitting a new clean coal power plant in Holland.”

You mean these things don’t work?

Why didn’t you say that in the first place?

Unfortunately, several attempts to contact P.O.W.E.R. through email and by phone left me waiting, unsuccessfully, to learn more. However, I was able to discover through several volunteers working a booth in Pentwater’s town square that P.O.W.E.R. is a bi-partisan organization, which may account for the “throw everything against the wall to see if it sticks” approach to marketing.

Those members of the Lake Michigan Power Coalition who supported Obama knew what they were getting into when they voted. One of Obama’s platforms was alternative energy; wind power in particular. Now, that it’s in the lake obstructing the views of these activists and threatening to destroy tourism, the economy, and property values, they’re not too happy.

Here, in Oceana Co., the vote was 51% to 47% Democrat. In fact, in the 18 Michigan counties with Lake Michigan shoreline 11 were in favor of Obama. So, it is curious to find supporters of clean, wind energy concerned over possible environmental effects.

If the good folks of P.O.W.E.R. think they are going to convince an administration that nationalized Detroit’s auto industry, implementing unrealistic goals and regulations, placed a moratorium on offshore drilling, and threatened to bury the clean coal industry, that wind turbines shouldn’t stand in Lake Michigan (because they might interfere with the flight patterns of bats), they are mistaken – the wind turbines will stand.

According to Obama, windmills are the answer to the environment and the energy needs of our country. But, the bi-partisan, Lake Michigan Power Coalition says they don’t work. And, the shores of Lake Michigan really are not the place P.O.W.E.R. wants to construct an over sized homage to the Dutch.

Aesthetic Pollution. They are unsightly. And, that will bring down property values for wealthy Republicans and Democrats who currently enjoy coastal living from the private beaches of their gated communities. And, it is for this reason P.O.W.E.R. will do all it can to force Havgul-Scandia wind turbines inland, where the less affluent can worry about such things.

Now, is the coalition wrong for not wanting wind turbines in Lake Michigan?

While I applaud efforts of P.O.W.E.R. to keep Lake Michigan free of wind turbines it would serve them well to streamline their message. Michigan does not want or need giant windmills in the Great Lakes. Simple as that. They are an eyesore and will degrade the economy by destroying the natural state of one of our greatest resources. Lake Michigan is not the place to test this technology. It isn’t worth the risk. But, implanting the idea that turbines belong inland under the guise of saving money is devious. Those rural and farming communities deserve the same health and safety considerations as those on the Third Coast.

Regardless, turbines will pop up in Michigan sooner than later.

Now, Mr. President, in case you are reading, allow me to offer an alternative solution: Rather than waste time and money fighting people who do not want windmills, in a setting where they do not belong, lets move to erect them in Detroit. The city is suffering economically and could use the business. What better place to experiment with new technology than within the borders of a city that has the experience, the work force, and the ability to get the job done.

As far as “Aesthetic Pollution”,  it might be a welcomed sight to once again find windmills in the fields and along the river just as our French founders had centuries ago. Perhaps, with this new industry, we can re-energize Detroit’s business sector and bring new tourism to the city, as well.

No Mistake In The Lake! – The Lake Michigan Power Coalition invites you to become members, volunteers, donors, or all three, by visiting www.protectwithpower.org or by calling 231. 709. 9231.