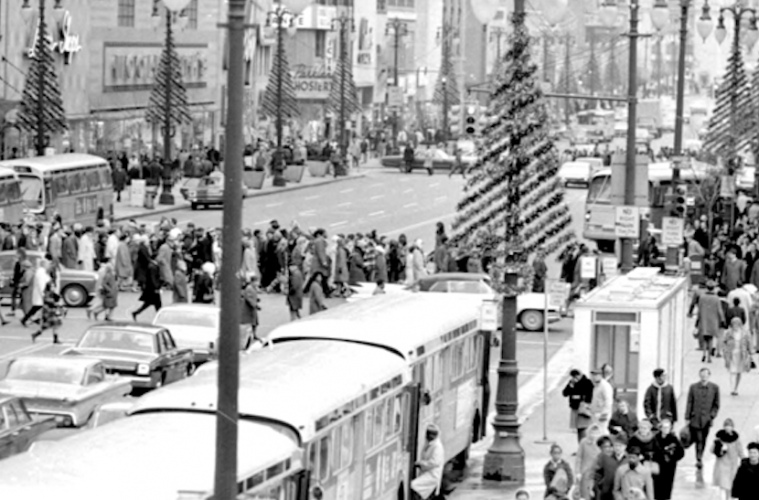 This December morning was clear and crisp. That by itself was invigorating, and it gave the feeling of the day being more alive, a sense of expectation of some sort of adventure in the air. We were going “downtown” – a very different meaning then, almost a statement.

After parking in the Hudson’s garage, we crossed the walkway to the brass and glass doors of the main building, and then walked through to Woodward Avenue’s street side entrance. The avenue was alive and vibrant with shoppers on both sides.

A ringing bell made us turn to see a uniformed man, along side a stand, holding up a red metal kettle, with a slot in the top.  His face was chiseled and weathered and his eyes sparkled a happy kindness.  A mother picked up her boy with rosy cheeks so he could slip a dollar in the slot.

The Salvation Army volunteer said, “Thank you and Merry Christmas”.

Then, for a moment, while looking at that so familiar scene, there was a distinct image and remembrance of my mom doing the same, many years before – when our family lived in a second floor flat on the Lower East Side – that moved me magically back in time, same corner, same J.L. Hudson Co., same picture.

The man rang his bell again and I was brought back to the present.

Each sound a small, polite reminder to give, in the season of giving.

We walked and stood in front of Hudson’s Christmas window display, made the kids hold hands so the crowd wouldn’t separate them. Each window a storybook of enchantment, drawing all of us into the scene, captured in idyllic serenity.  It expressed itself in the faces of everyone looking in, wanting to be a part of it.

After a sufficient chill, we went inside and took the escalator to the mezzanine.  A pleasantly plump waitress brought our hot chocolate. It seemed everyone here had rosy red cheeks, and the conversations spilled over the tables. The kids took to staring over the railing to the floor below with all its activity, their eyes wide, in earnest, taking everything in.

A short while later, I saw a pair of leather gloves in the showcase and bought them for my mother. When I paid for them the money was placed in a plastic cylinder, sent up a pneumatic tube, then returned efficiently with my change. The sales lady asked if we’d like the gloves delivered. The next day they were. What a feeling of civility.

When the elevator door opened the gloved operator asked what floor.

She closed the accordion metal guard inside, rotated the handle, and up we flew to higher places. We stepped into a Wonderland of every plaything imaginable . . .

We walked through slowly, eyes wider at every isle.  Roy Rogers gun with leather holster, cowboy hats, Indian headdresses, bow and arrows, wooden champion sleds with metal runners, giant stuffed teddy-bears, games and dolls.  Every corner filled with an offering to entice and enhance. Skip the kids – I wanted a new sled.

Then people, fresh from the outside, kids sporting their wintry colorful clothes, eyes full of excitement and expectation, wishing and dreaming. Toyland. Adventure. Sugarplum thoughts.

By now it was near dusk and time to eat.  Two special things left to do: Dinner in the Riverview Room and Santa.  Don’t know why, but always thought Santa should be seen at night.

The Riverview Room, with its great wooden beams, was warm and cozy, and in keeping with it’s quality, just dressy enough. Eating there, for most, seemed like an event; Maurice salads, popovers, Yankee pot roast, and conversation from families drifting from table to table, all served with great coffee and company.

People and holidays – small talk, big talk, no talk. How fortunate just to “be” with pleasantness. There is a time that opens a great door of warmth.  Christmas.

Santa’s house, and the path to get there, was tunneled with snow, stars, evergreens, magical small lights and reindeer. Were we half way to heaven?

Oh yeah, and there was a line.  But, all the families seemed patient. It was a happy line, filled with all shapes and sizes. Some wealthier than others, some less so, and some poor. But, we all stood in the same line as we watched the dreaming faces of children.

The kids entered the inner-sanctum of Santa’s house to make their wishes.  Maybe they were big enough to cover everyone.

On our way out, we stepped through the Woodward entrance and met the avenue ablaze with Christmas lights of color and cheer, on both sides, up and down every building and streetlight.  Crowds of people were hurrying and waiting to shop.

Over the speaker system, Gene Autrey was singing Rudolph the Red Nose Reindeer.  A bell rang from the corner.  We placed our little offering in the red kettle, just as we always have, and heard the fading bell, as we went back through the warmth of J.L. Hudson’s to go home.

Tom Brank was born and raised on the Lower East Side of Detroit. He was a broker inside The Penobscot Building in the 1960s and formed Cinema 1976 on W. Grand Boulevard in the early 70s. He now writes from northern Michigan.