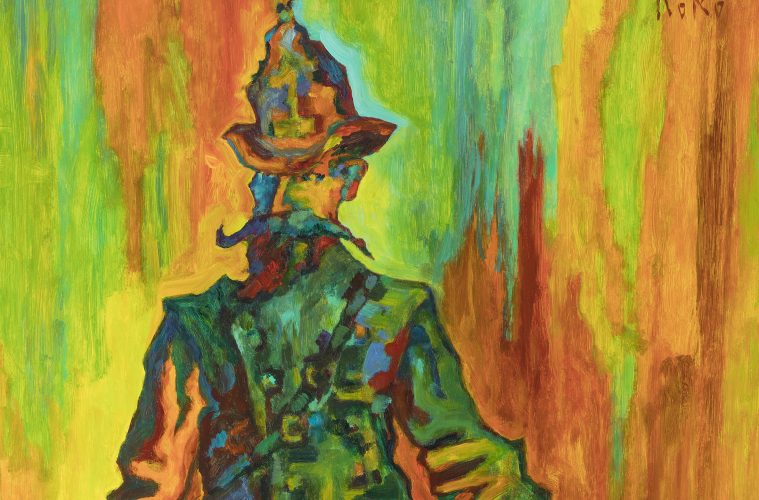 Tony RoKo | Floor Stains and Urethanes (And, A New Unveiling)

The Tony Roko File or The RoKo Dossier or (if you like) the thick and bulging folder we’ve been keeping and collating for the last ten years shows no sign of getting less thick – and RoKo himself has yet to show any sign of slowing down or becoming less expressive and experimental with his ongoing works. That’s heartening news for a growing fan base and especially happy news for critics and discerning art buyers.

A brief biographical synopsis will suffice before we get to the chief news element here. A lifelong Detroiter and one of the first members of his family to be a native-born citizen, RoKo started working at Ford while in his late teens. The job did not stifle or curtail an early interest in art, but (happy to relate) complemented it nicely when the company gave him Resident Artist status and encouraged him to add some belated color and vibrancy to its plants and factories.

Selected works then started to appear on gallery walls and a two-fold metamorphosis occurred. RoKo proved the naysayers wrong and proved that “industrial” materials like enamel paint could be used just as effectively as oils or watercolors. No less importantly he developed his own personal style – one that is energy-infused, fiery, and evocative of both Belle Époque romanticism and the dreamlike canvases of certain Expressionist masters. The result? Well, being named Best Fine Artist of the Year five times by HOUR Detroit is a pretty good validation in our opinion.

Another development that pleased us and others is RoKo’s partnership with Detroit’s Atwater Brewery. The company takes pride in its products (justly so) and believes its presence in the city should be amplified by blending art with the brew. That was accomplished nicely when they approached our brushmaster and contracted to have a RoKo work present on several labels. We shouldn’t segue into an endorsement for imbibing, of course, but … what the heck. The Dirty Blonde is a sweet quaff!

And now we have the happy announcement that Atwater will unveil a brand new potable on September 14th at a special reception at the Detroit Foundation Hotel – an exquisite 1929 structure that started out nearly a century ago as the headquarters for the Detroit Fire Department. Also unveiled will be Tony RoKo’s The Commissioner, a six-foot tall portrait of a classic Motor City firefighter imbued with heroic charisma and insouciant courage. And yes, the Commish will THEN be an added bonus of color to the new beer we mentioned above.

We cornered RoKo (an amazing feat in itself!) before the Friday event and we got some answers to a few questions. 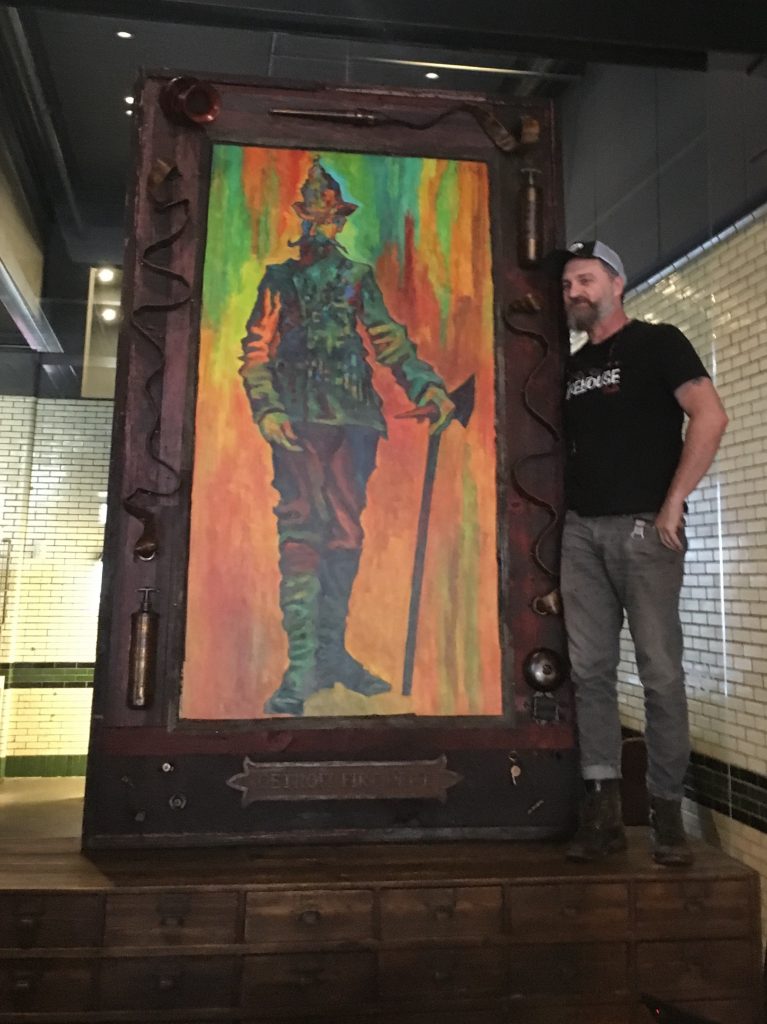 This weekend a work of yours will be the focus of attention for both Atwater Brewery and firefighters local and nationwide. Please tell us more.

As you can imagine, with the anniversary of 9/11 this week, it’s a special honor to be part of a commemoration that honors this nation’s everyday heroes. We decided to celebrate Detroit’s firefighters with the dedication of  “The Commissioner’s Brew”, an Atwater Brewery red lager, and a symbolic portrait which will be housed at the Detroit Foundation Hotel, which was formerly the downtown headquarters of the Detroit Fire Department. The finished artwork is actually over seven feet tall and is within a frame fashioned from re-purposed relics specific to the area and to the firefighting trade.

Several Atwater potables come with a colorful touch of Tony RoKo these days. This isn’t unprecedented (Glenn L. Barr and several other talented people come to mind), but how did your association with Atwater come to be?

My connection with Atwater happened very organically.  I was asked to design a label for a limited-run Atwater brew commemorating Ye Olde Saloon’s 40th Anniversary. That limited run of 60 cases sold out in less than 24 hours – and before I knew it, I had a meeting with the Atwater team to discuss a full rebrand of the labels for the iconic Detroit Brewery. To date, I have designed more than 20 of their labels as the brewery’s reach has extended to more than 30 states and the international market. The collaboration has really been a win-win for both of us.

You visited Spain not too long ago. What were the artistic benefits of that happy jaunt across the Atlantic?

From flamenco dancers to the Picasso Museum to the infamous Els 4 Gats … inspiration was at every turn! We also took a road trip to Southern France, tracing the footsteps of Van Gogh, Cézanne, Toulouse-Lautrec, and Matisse. It’s always a nice surprise to see the way that those experiences turn up in my work.

Much is made of the fact that you enthusiastically (and successfully) use paints and materials that don’t immediately come to mind when people discuss portraiture and other works. Do you still do that?

Starting out in the factory, I used industrial enamels because that’s what was available at the time, and it seemed to be the right “fit” for the environment.  Since then I’ve become what one might consider a studio painter, using more traditional materials. Having said that, however, floor stains and urethanes can still be found in most of my works. The majority of the framing materials that I use are post-industrial and post-architectural materials, reclaimed from many demolished Detroit buildings.

You’re the only painter we know who has works commissioned and owned by Hitsville USA and Jay Leno. Is that sort of connection to fame every artist’s dream?

Although I think every artist fantasizes about having famous collectors, over the years I’ve discovered that whether it’s signing an Atwater six-pack at a party store or getting a commission from Lady Gaga, the real gold is in the personal connections that are made regardless of someone’s background.

Why is your name so frequently mentioned with a particular art foundation?

The Art Foundation is a non-profit that I founded in 2017.  It is an arts education organization with the expressed goal of “Fostering Creative Minds”. Through the Art Foundation (www.artfoundationdetroit.org), I’ve the opportunity to work with groups of young people in the Detroit area, most recently with groups from the Rhonda Walker Foundation and Wolverine Human Services Therapeutic Programs, and to guide them through my proprietary curriculum which helps kids create a basic understanding of art composition and art theory.  It’s really amazing to see these kids, who may have not had any real art experiences prior to this class,  come out of their shells and create beautiful, unique, and expressive pieces of art that help them build self-worth and pride in themselves.