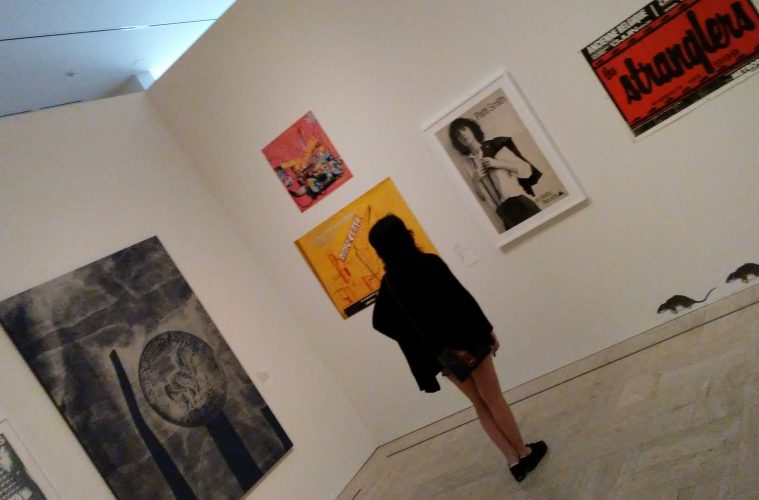 Who remembers Punk music? It made a brief splash during the mid 1970s. It was meant (like all youth movements) to appear strange and threatening to elders, and other outsiders. There was a change of attitude. Punk was anti-hippie. Colorful tie-dye clothes and a peace and love ethos were replaced by black leather, ripped jeans, and angst.

Along with the music came the posters, flyers, record covers, fanzines, and other visual ephemera. Rather than being wildly psychedelic, punk and the various post-punk visuals relied on collage, distortion, sarcasm, shape, and attitude. Like the hippies, Punk, after it escaped into the wider world from its source in the Bowery section of New York City, gained a certain amount of self-righteousness. Like other youth movements, Punk became a political statement. Then it became a commercial product. 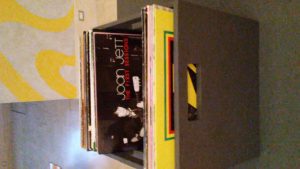 And now, these (not so) many years later, it’s history – on display at the Cranbrook Art Museum.

Since Punk is recent history, many of us still remember those days. I attended the exhibit with my 24-year-old daughter, who doesn’t remember those days, and managed enough self-control to only bore her with one or two stories of the records and bands from those days. Speaking of records, they have some out for patrons to play. They’re not all strictly punk, and some of them are current reissues, but young patrons were still playing them.

As we were viewing the various Punk displays, my daughter asked, “Wouldn’t punks object to their posters being matted and framed for display?”

I laughed. Sid Vicious would have spit all over them in protest. Whether or not the protest would be sincere or for show is debatable. I was familiar with many of the artifacts, but what I wasn’t familiar with were the artists who created the images and the techniques they used. It’s always good to learn something.

In addition to the records and stuff on the walls, there is a Punk movie playing in an alcove. One prominent display is a large 3-D collage by Cary Loren, formerly of Destroy All Monsters, a Detroit band that, in its earliest incarnation, out-punked the punks. There was also a wall of some of his Polaroids, which you must see up close.

The show has been up since June 16, but you have until October 7 to see it. It’s worth it. Afterward, wander around Cranbrook.  Maybe have a picnic. Make a day of it. It’s all there for your enjoyment.

Hi, I’m Harry Onickel. I am a reader. I always have been. I like to think that between reading for all these years, fiction and nonfiction, high and low culture, classics and trash, the acceptable and the dangerous, and just being around for a bit, I’ve learned one or two things and perhaps gained a bit of perspective. In addition to learning, reading makes me wonder. Lately, I’ve been wondering – what lies behind the mask? My blog, occasionally updated, is The Teacher That Exploded.