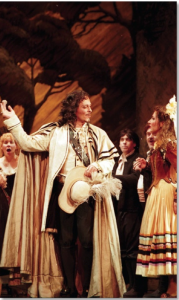 Michigan Opera Theatre presents Mozart’s brilliant tour de force of musical perfection, Don Giovanni, in a five-performance engagement April 10-18, 2010 at the Detroit Opera House. Deemed by critics to be the greatest opera ever composed, Mozart’s brilliance shines through in this drama giocoso, a subtle comedy and moral tragedy surrounding the historic lover Don Juan.  The opera will be sung in Italian with English subtitles projected over the stage.

In the opera, Don Giovanni is an infamous womanizer who moves from conquest to conquest through Seventeenth-Century Spain with his hapless servant Leporello. Two women, a dazed peasant girl, her outraged fiancée and the spirit of her murdered father join forces to punish the incorrigible rouge, interested in only adding names to his lengthy list of “achievements.”

Some of the most noted arias in the opera include “Là ci darem la mano” and “Il mio Tesoro.” The music of Don Giovanni has been featured in a number of movie soundtracks, including It Happened in Brooklyn, Kind Hearts and Coronets and Babette’s Feast.

The role of Don Giovanni will be alternately performed by Randal Turner, making his U.S operatic debut, and Robert Gierlach, who will be returning to Michigan Opera Theatre, after making his U.S. debut with the company in the 2002 production of The Marriage of Figaro.  Turkish bass-baritone Burak Bilgili (10, 14, 17) will return as Don Giovanni’s servant Leporello, alternating in the role with American baritone Jonathan Lasch (16, 18m).

The role of Donna Elvira will be alternately performed by Kelly Kaduce (10,14,17), who made her MOT debut in 2005 as Caroline Gaines in Margaret Garner, and Detroit native Kimwana Doner (16,18m), who made her MOT debut in 2008 in La Rondine. Caitlin Lynch (10,14,17), also a Detroit native, will alternately sing the role of Donna Anna with Jennifer Rowley (16,18m), who will be making her MOT debut.  Mexican tenor David Lomeli will make his MOT debut as Don Ottavio and bass-baritone Rod Nelman will also make his MOT debut as Commendatore.

The MOT orchestra will be under the baton of regular Metropolitan Opera guest conductor Christian Badea.  British artist John Pascoe will stage his own production, for which he designed the sets and costumes for MOT.  Pascoe most recently designed sets and costumes for the world premiere of David DiChiera’s Cyrano in 2007.