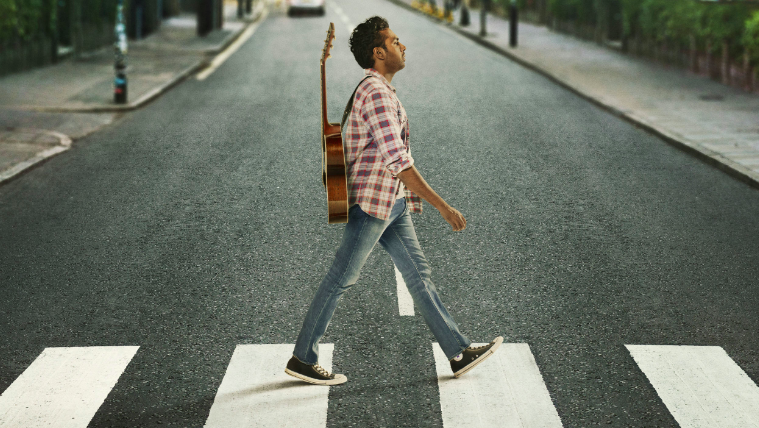 ‘Yesterday’ Review | Imagine A World Without The Beatles

Imagine…a world without the Beatles. That’s the poignant premise of Yesterday, an otherwise strikingly mediocre film…which is very much worth seeing. Making a good movie must be a really hard thing to do. The proof is how few succeed (I say with respect and admiration for those who try). Especially, when it’s something personal…which this film strikes me as being for director Danny Boyle.

‘Yesterday’ is heartfelt. That’s the good news. It is a story about a musician, Jack Malick, played by first time lead, Himesh Patel, whose career is going nowhere. He suffers an accident and while healing is handed a new guitar as a get well present from paramour Allie, played by Lily James. Soon, Jack’s strumming Beatles songs – only no one knows what he is playing. Because, in our leads new reality The Beatles never existed.  Thus, screenwriters Jack Barth and Mackenzie Cook set the stage for a miraculous development that winds our Jack down the long road of pop stardom.

Unfortunately, the pace is choppy, the early momentum sputters only to die, and Jack is at best (and perhaps by design) only marginally likable, leaving ‘Yesterday’ the movie falling short of other works by Doyle.

But, the premise raised in ‘Yesterday’ is something to consider. Had the Beatles written THREE songs…it would still have been a miracle – “Let It Be.” “Hey Jude”. “Yesterday.”

Imagine for a moment having never heard these or any other Beatles songs. Then…as the main character commences to perform them…try to imagine that you’re hearing them for the first time. That’s the brilliance of this movie…and it makes the whole thing worth it. The deeper beauty in the message is to look at what we’re taking for granted; look what we HAVE; Dude…the BEATLES are the greatest songwriters and band in pop rock history.

These songs are so beautiful and utterly transcendent that they become something more. Human beings are of course composed of molecular DNA. These songs somehow penetrate and infuse with the DNA in our very souls.

Kudos to Danny Boyle for RE-introducing us to the Beatles. Because, as we watch Jack play these songs for others who are hearing them for the first time it makes it possible for us to imagine that we too are hearing them for the first time – and it’s like getting punched in the heart with love. It’s so deep it hurts. And before you know it…you’re crying. Weeping. Depending on the mood and how safe you feel…sobbing. That’s what these songs are capable of doing…and that’s not even close to normal.

These songs are so powerful and moving that they can’t be confined to the category of mere “music.” These songs…are a force of human nature…so remarkable…so stunningly beautiful and so utterly distinctive that the thought of them NOT being a part of our social fabric is hard to fathom. The filmmaker does a tremendous job in this respect and in a very real way, for those of us who HAVE forgotten (and shame on us for doing so)…gives us the Beatles all over again.

Since seeing the movie last night I’ve been listening to some of the bigger hits, with a newfound appreciation. As I’m listening I think, “what if I were just hearing this now for the first time?”

Compared to The Beatles today’s music (and MOST music) is rubbish. That’s just the way it goes. Talent and genius are NOT equal. Even Ed Sheeran (who does a convincing job of being kinda who you expect him to be… a regular guy) acknowledges at one point that he is Salieri to Jack’s Mozart. In the face of the Beatles’ genius, the BEST any of us could hope for is Saliere, and even then Saliere rises above the fray of current mediocrity.

‘Yesterday’ is not a great movie. It’s not even that well done. But it doesn’t need to be. The scene with the two “believers” deftly delivers the on point message that we just don’t care. We’re just so happy to be hearing the songs. Were they to disappear we’d miss them so much.

A world without The Beatles is a world with a hole in its soul.