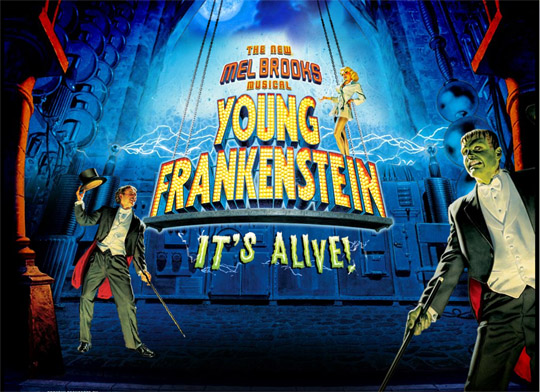 Young Frankenstein | A Word With The Ensemble

It doesn’t seem we speak enough about theatre in this city.

As I sat enjoying a bottle of Red Bicylette Rose inside the Cadillac Café, during the intermission of Mel Brook’s Young Frankenstein, I thought I would ask Director of Operations and native Detroiter, Jason Warzecha, if he knew why that is so.

“I don’t know,” he said. “Because, we really do have some fine productions that come through here.”

Warzecha is right, and this evening’s production was a perfect example; an exhilarating  theatrical performance on par with any I have seen.

After final curtain I drove slowly from the Detroit Opera House through an icy maze of dark, empty streets to Mario’s Restaurant where the Young Frankenstein cast had gathered to celebrate opening night. I approached a table of performers, who immediately offered me a seat, and struck up conversation with several members of the ensemble; Shauna Hoskin, Mathew Brandon Hutchens, Sarah Johnson and Amanda Klootz Larsen.

Shauna quickly introduced herself and told me that she was one of four Swings; a performer who must be ready to handle any role, should one open. “But, you really just have to push someone down the stairs if you want to get on stage,” she added.

“We’re in the cold and flu season now so you don’t even have to wish for it,” Sarah said.

A couple more quiet laughs from the table.

The ensemble was seated in a back room with very low light and no music. There didn’t seem to be much food prepared either. Four or five tables held the leads and supporting cast. A few of the others were filled with two or three people who contained their conversations to whispers and occasionally glanced over the ensemble in an effort to recognize someone. The event, as it was described, seemed to be operating without a host. This made breaking the ice an awkward endeavor, especially for a group of out-of-town performers who had just left it all on the stage.

The troupe moved to New York from places like California, Edmonton, Ohio, and Unity, Maine, all with a dream and the determination to make it in The Theatre. And, now they sat together, far from home, in the bitter cold of an economically depressed Motor City.

Amanda Klootz Larsen had previously performed in Detroit in 42nd Street and the third tour of Spam Alot. She missed her husband in NYC but loved traveling with the cast. Mathew Brandon Hutchens, who left his fiancee in New York, shared similar feelings.

Like most of us, life in the theatre has its trade offs. Somewhere between “the little things” and a Tony Award exists a world of wake up calls, sound checks, bad food, yoga, airplanes, cabs and fleeting conversations. Little wonder a traveling theatre troupe develops strong bonds.

“I’ve got a ticket and a dollar,” shouted Sarah. Once a Rockette, with the legs to prove it, she traded both in for a glass of house red. I asked how this evening’s afterglow compared with some of the others on the tour. “The recession has really hit the theatre and after parties,” Sarah said. “It’s pretty tough out there.”

“Some of the cities we thought would have good parties don’t,” added Mathew. “While others, like Cleveland and Detroit, have been very good to us.”

Even in the down times, it seems, there are those in the Midwest doing what they can to extend a hand.

And, what of the Detroit audience?

“I think the audience responded well to us tonight,” Mathew said. “There was a full house and a strong response throughout the show.”

The rest of the performers nodded gently in agreement.

I bought a bottle of house red for the table and moved the conversation in another direction. A busboy brought a few chicken wings and celery sticks over from the buffet that held some tin foil chaffing dishes someone left to slow burn over a Sterno. He bowed his head and walked off, leaving the finished plate ware and scattered crumbs on the table. Amanda and Sarah asked about shopping and good places for breakfast. I told them what I could.

Shauna finished a drink of something and spun quickly to me. “Do you know I’m the coolest person ever?”

The party seemed to be picking up.