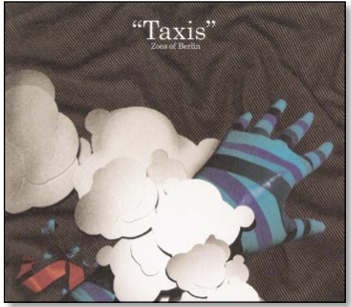 For six weeks, Zoos of Berlin lived and recorded in a 5,000 sq. ft. room at the Russell Industrial Center, a former auto parts factory in Detroit. The makeshift studio was built entirely from scratch by the band. “Taxis” was recorded and mixed by Zoos drummer Collin Dupuis, who also works as chief engineer for techno legend Carl Craig. Natural reverb from the rooms and halls of the building was used exclusively in the making of the record. Does any of that make their release “Taxis” sound any better? I’m not sure, but it does make for a good story.

I bumped into keyboardist Will Yates a few weeks back at the farmer’s market, determined – by his choice of vegetables – that he was a musician and asked if he would send me a copy of his latest work. A few days later it arrived in the mail and I have been listening to it ever since.

Sophisticated, alternative, easy-listening, Zoos Of Berlin are a group of art boys, blending atmospheric guitars and soft, seductive bass lines, with little bleeps and danceable metaphors that could just as well have been the pop CD from 90’s Detroit duo, Ebeling Hughes. It’s a wonder we have not heard more about them.