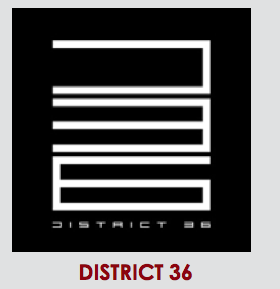 A new beacon for New York nightlife is set to ignite this fall in the heart of Manhattan – DISTRICT 36. The brand new, custom-built nightclub injects originality and vitality into the scene and claims it will once again put forth New York City at the center of global clubbing.

District 36 revives the tradition of classic New York dance clubs, built for dance music enthusiasts, by building on the pillars of the proper NY club: impeccable sound, exceptional music programming, superior hospitality and a dance floor that gives one the intimacy of a small room but the power of a mega club. The three-level nightclub features sound designed and engineered by Gary Stewart Audio-legendary for designing sound systems at some of the most renowned clubs around the world.

District 36’s Musical Director, Taimur Agha, will be programming nights with the same philosophy behind his BlkMarket Membership parties: booking artists who have inspired him as a DJ and bringing in the talent that he would want to play alongside.

District 36 will also feature the next incarnation of Victor Calderone’s illustrious EVOLVE DJ residency. The legendary New York DJ handpicked the club to begin the next chapter of his legacy based on the club’s commitment to superior sound and its focus on building a technology-driven room for the next generation of clubbers.

“As a DJ it’s important to establish a connection with your audience and after traveling the world, instituting a regular base in NYC is like coming home.” Says Calderone. “This residency will be a fresh start and as an artist it’s important to evolve, reenergize the crowd as well as myself and always stay ahead of the curve. Together we will build a new home for clubbers.”