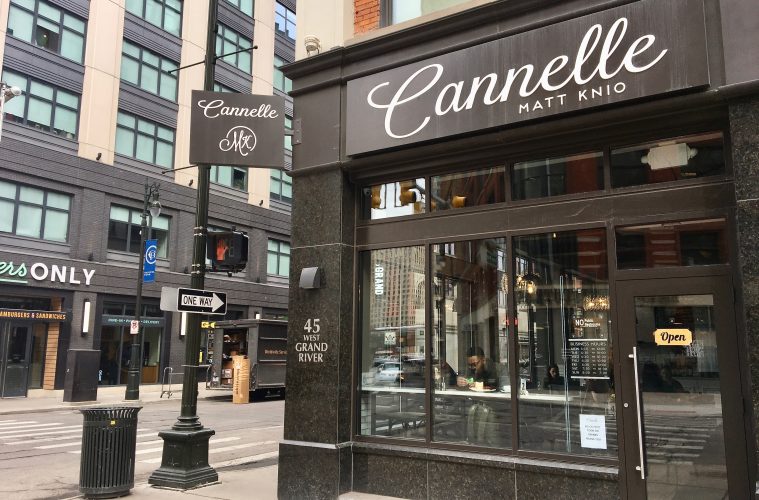 Cannelle | A Little Bit of Paris in Capitol Park

Writing this afternoon from that little bit of Paris in Capitol Park known as Cannelle, where I am in the midst of enjoying Almond Croissant and coffee with Metropolitan contributor, and soon to be restaurateur, Mr. Julién Godman.

Where is Monsieur opening his little culinary oasis, you ask? Well, I can’t say what location, exactly, for that would be cheating, but I can say that a certain international city within a city will soon be home to a new Armenian, vegetarian, inspired café and art space.

This, straight from the culinarian’s mouth, as he orders a savory spinach and cheese pastry (that probably has a name), along with a beautiful plum tart, which Julién promises to share, and of course a lovely cup of coffee to aid in warding off the bitter cold still clinging to our persons.

Cannelle is filled with customers enjoying conversation, reading books, and at work on their devices. Eastern Block pop tunes support lovely views of the city, baskets are filled with brioche, baked goods, and le pain quotidien, with barista busy brewing a variety of roasts. The aromas and ambiance here are both comforting and exciting. We sit center room and take a moment to admire the artistry of our selections. But, we’ve also kept a curious eye on a young, stylish, African-American woman, who has been sitting alone at a window table, checking the time at regular intervals. 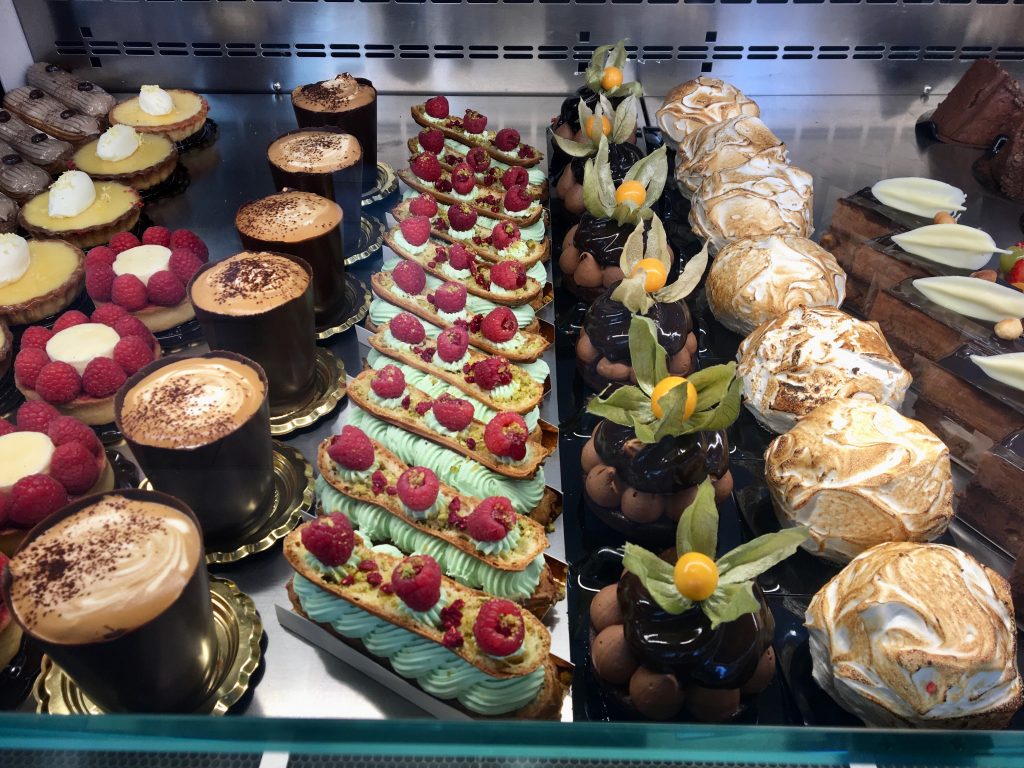 Patissier Knio does not play | AB

For now, let us focus on this absolutely exquisite almond croissant created by the incomparable Patissier, Matt Knio, whose creations are certainly French (though we can not at this time confirm nor deny the background of Monsieur).

And, by French, I mean Viennese, for as we all know the croissant, brioche, pain au raisin (or chocolate), etcetera are delights that bridge the gap between traditional boulangerie and patisserie leaving this style of French pastry under the category of “Viennoiserie” – French for “things from Vienna”.

That piece of information came my way during the summer of ’96 when as a svelte, libertine, I embarked on le grand tour and fell in with the 19-year-old twin daughters of one of the finest rustic patissiers in République française – but that, dear readers, is a story for another occasion. And, while such pastries may have originated in the Austrian Empire it was made clear to me at that time they were perfected in Paris.

Do you see the buttery and scrumptious feuilleté hidden within that crumbly and flaky exterior? Perfection. Embraced by sliced almond and filled with dreamy almond paste, this is the work of an artist; one who has the ability to repair, momentarily, with pastry, our damaged relationships in life. 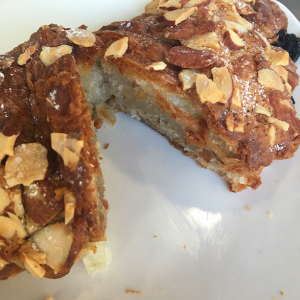 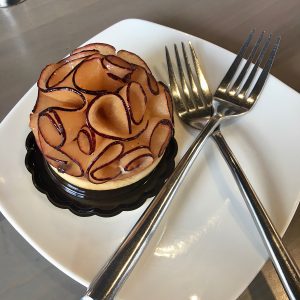 Now, observe the delicate folds of plum nestled atop the traditional creme and tart foundation that makes this work a piece of edible architecture. Two forks, of course, as Monsieur Godman and I are sharing (though, I would have been fine with just one.) Here, again, we notice the subtleties between French bakers and pastry chefs, as the almond croissant is the perfect example of working with the heat of the oven, while the plum tart represents the work of one who works with cold materials.

As Master Artisan from the Academie de Versailles in France, where he studied under the Champion French Pastry Chef in Paris, it is clear Chef Knio is skilled in both disciplines, preparing with care the finest breads, pastries, and viennoiseries for customers seeking respite or, perhaps, even enlightenment, on the corner of this city park. Rest assured, monsieur Godman and I are simply delighted.

Our lovely, young, woman of African-American descent, however, is once again checking the time. It is clear she is waiting for someone as she sits somewhat nervously, sipping hot coffee, staring out the window in no particular direction. She focuses on a young man who crosses the street and is headed toward the front door of the patisserie. She straightens her posture, adjusts her cup and saucer, the spoon, as her eyes follow the man to the entrance. Her face softens. But, the young man continues past. She relaxes her shoulders and again checks the time. 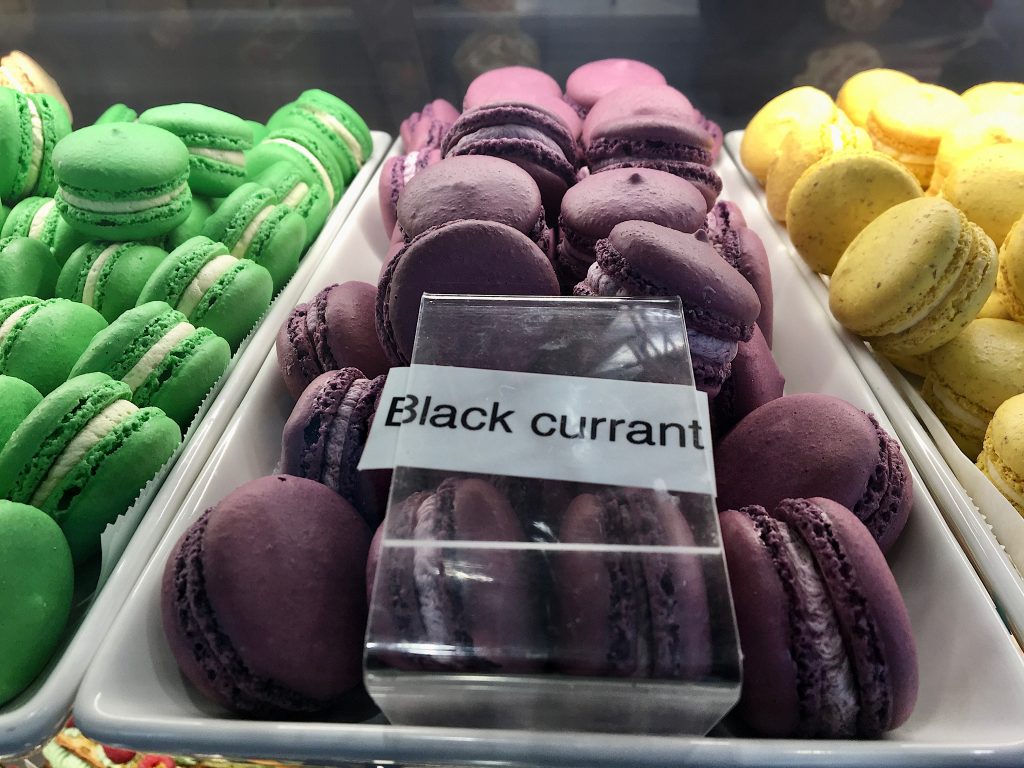 On a plate at her table rest a number of colorful macarons. She sips her coffee, glances at the delicacies, but does not indulge. Her attention is drawn once again outside. This time across the street to the corner where a young, African-American man waits in front of Detroit Institute of Music for the light to change. He hurries across and enters the patisserie wearing fresh hip-hop attire and backpack. He spots the young woman. His face reveals an expression of apology – with explanation. No doubt an extenuating circumstance has caused his delay. He moves toward her table, presents a charming smile, and slides into a chair.

She smiles back, softly.

“That could be the beginning of love …”

“It could be … so, what I’m thinking is that we’ll offer vegetarian but I don’t know if I want to go completely Vegan.”

“We could be sitting here witnessing the origins of a romance that lasts a lifetime.”

“Can you imagine that …? Here we are, with all of the problems going on in the world, presented with a view of one of life’s most elusive mysterious.”

The couple is smiling and laughing, just a little, in that way we do to acknowledge being pleased by the other.

“The origin of love, Julién. This could be the beginning of forever.”

“Probably, not with you staring at them,” Julién says.

“I have to know what this is. I have to know if we are witnessing something that will produce a lifetime of memories…Think about it…These two have just met and may be embarking on a journey of incredible beauty. Think of the love, and the laughter, the sorrow, and disappointment ahead of them. Imagine their children, Julién…And, it all began right here in a French Patisserie, on the corner of a city park, in détroit…”

A server delivers the young man a cup of coffee. He thanks her. The couple begin sharing from the plate of colorful macarons. Both are now very much at ease.

“If the server comes please have her freshen my coffee …” 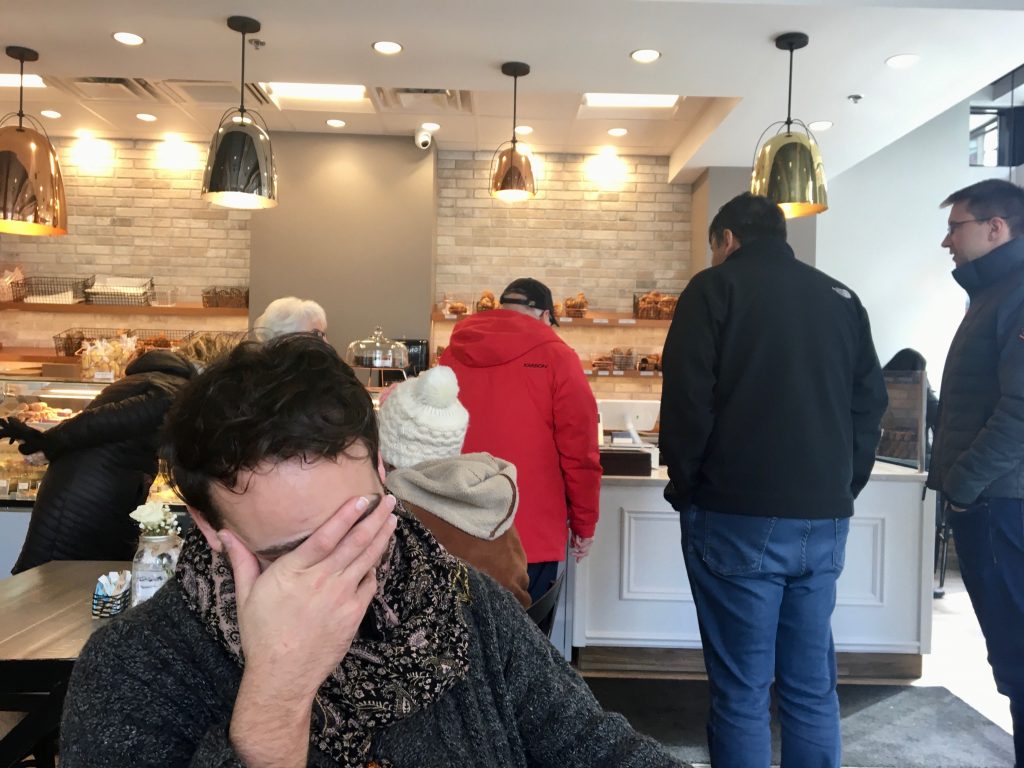