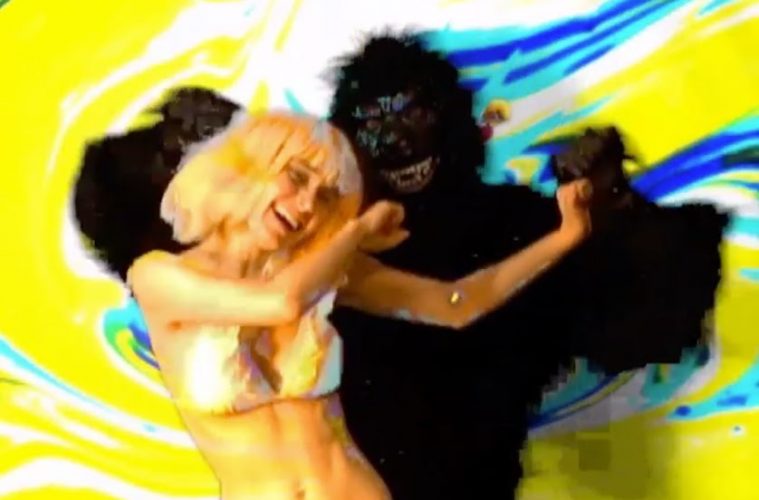 “Thee Ape…
For centuries man has been fascinated by our wild kin.
Are we the winners of a cosmic marathon?
Or, are we the developed monkey slime of our ape ancestors? This movie does not have the answers.”

Addison Binek​; local filmmaker and connoisseur of bad movies; host of ​Movies to Watch on a Rainy Day ​and ​Tromasterpiece Theater ​becomes the subject of another heart-warming local success story as he celebrates the ​DVD release of his first original film, ​PSYCHO APE! ​

An epic and unforgettable shit-fest, and a gory love letter to Troma and low budget horror, PSYCHO APE! tells of the story of an ape who escapes from the Detroit Zoo and massacres a slumber party of teenage girls leaving only one survivor, a beautiful yellow-haired pixie by the name of Nancy Banana. Twenty-Five years later, as Psycho Ape’s killing spree continues, destiny reunites the two for a ​Beauty and The Beast meets ​Bonnie & Clyde style friendship (because why not?). But, that friendship is soon threatened as the crazed Dr. Zoomis vows to capture the murderous Ape. The result is 64 minutes of non-stop madness that will leave you with no choice but to grin at the film’s pure inventiveness and sincere dedication to it’s own absurdity.

But, what is the real meaning of this film? In an age of Wokeness and Critical Theory, what is the real message behind this allegory? Is it a statement on the brutality of Capitalism and the intersection it shares with Patriarchy? Or, perhaps, a cautionary tale on Fascism and Marginalization and the inevitable uprising of the oppressed? Or is it simply a silly movie about a guy in an Ape costume killing people with a banana? Let’s find out! 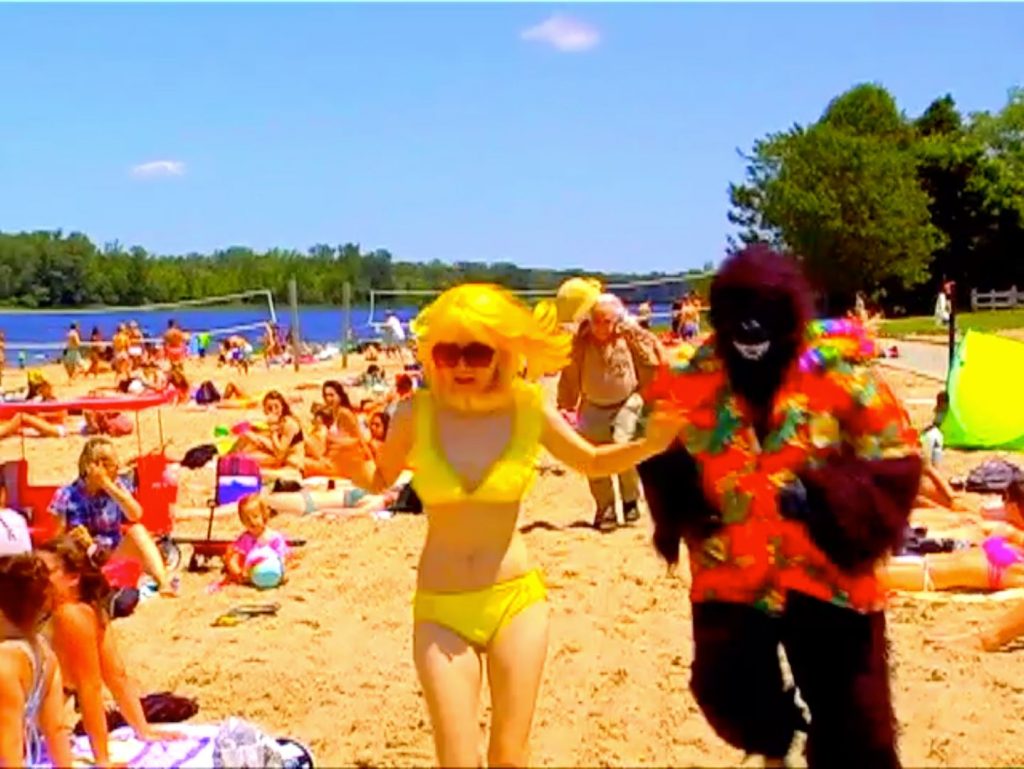 Addison Binek ~ “​Psycho Ape!​ came from a dream I had three years ago. I dreamt I was filming my friend Johnathan Gogoleski running around wearing his gorilla costume and waving a butcher knife in the air. When I woke up, I immediately thought of the title “Psycho Ape!”

●  Why do you think we keep making films about Apes? Are there any other Ape films you recommend watching first to have a better appreciation and understanding of the genre?

●  What was production like? You guys obviously had a Bajillion dollars for the amazing production value. What challenges did you guys face? How long did production last? What sacrifices had to be made?

“We had a budget of about $7,000 from a Kickstarter we ran, and the challenge was not spending it all at once! We drove to New York from Michigan to film with Bill Weeden and Kansas Bowling and filming in New York was expensive because of food, hotels, travel expenses, paying the actors, etc. so the money went really quick. We started writing the film in March 2019, started shooting in June 2019, then wrapped August 2020 because we had to take a break due to the pandemic.”

●  What was your favorite special effect in the film? Do you have any fun gore-effects you would recommend for us to try at home?

“My favorite effect in the film is probably when the ape yanks the banana man’s tongue out, haha. That actor provided his own banana costume and fake stretchy tongue for the scene.”

●  Robert Pattinson has made quite an epic cameo as one of the stoners in the bong-smoking scene. Was he as difficult to work with as he was on the set of ​The Batman?​ Did he infect everyone with COVID-19?

“We filmed most of the death scenes long before Covid hit, thankfully. Those scenes were actually the first things we shot last May. The girl getting her leg amputated by a banana was the first death scene we shot for the movie. 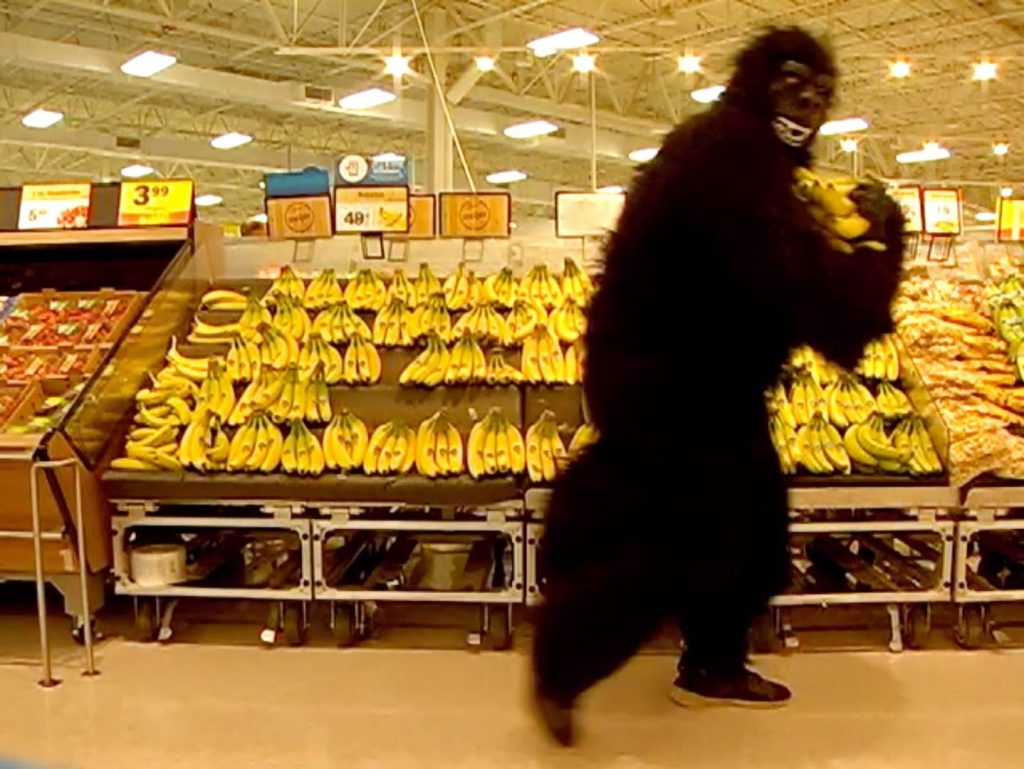 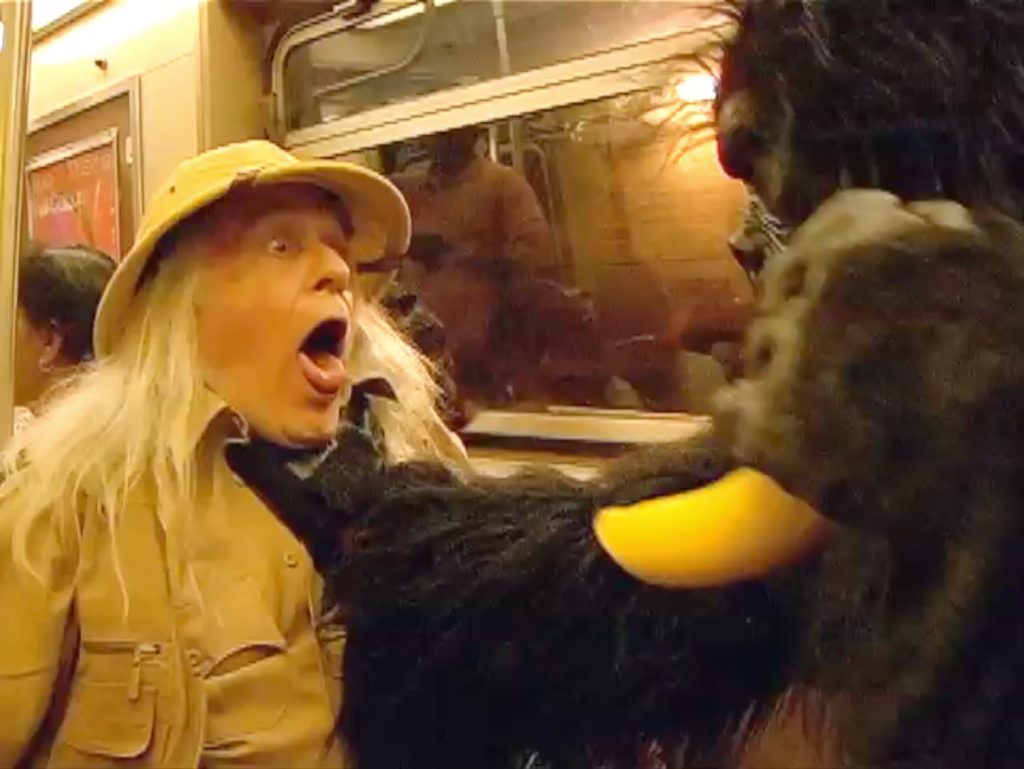 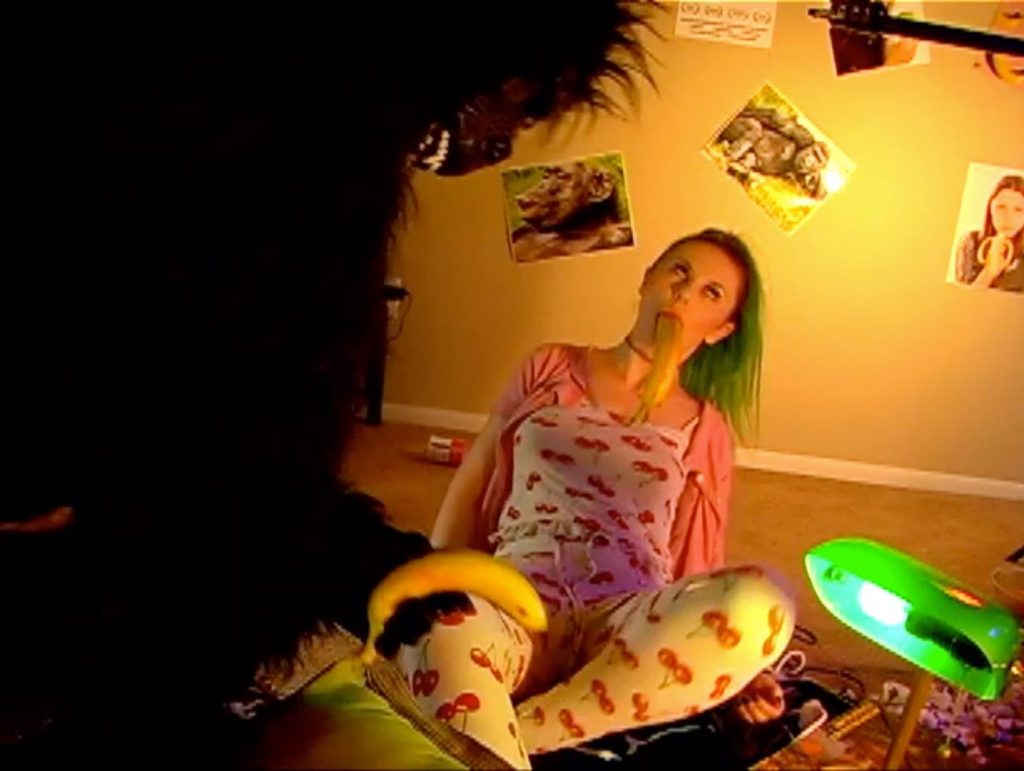 ●  Who is this beautiful and mysterious woman Kansas Bowling??? Is there anywhere else we might have seen her? What is she like to work with? How did she get involved? Does she have a boyfriend?

“Kansas Bowling is an actress/filmmaker too. She made the film B.C. Butcher when she was 18 years old, and appeared in Once Upon a Time in Hollywood as a Manson girl during the Spahn Ranch scenes. She improvised a lot of her own dialogue in Psycho Ape, including one of the lines – ‘Don’t you ever get sick of bananas? Don’t they ever get Dole?”

“Bill Weeden is an actor known for his role in Sgt. Kabukiman. It’s a cult action film by Troma Entertainment. But he’s been in lots of other indie films over the years and lots of stage shows in New York.”

●  Where did you find such an amazing and talented cast?

“The cast came about when I met Bill in New York April 2019. I was invited to participate in a double bill screening of Sgt. Kabukiman N.Y.P.D. (a Troma film where he plays the villain) and Tromasterpiece Theatre played after. We hit it off, he liked Tromasterpiece, and told me if I was ever planning to come back to New York to film something to give him a call for some kind of cameo. When I got back home I told my Psycho Ape co-writers that Bill was interested in being in something of ours, so we called him up and offered him the role of Dr. ZOOmis. Kansas was cast because a few years ago she sent me a free DVD of her movie B.C. Butcher to review on my movie riffing review show Movies to Watch on a Rainy Afternoon. She liked the episode and we stayed in touch. I reached out to her to do a cameo in Psycho Ape and I told her Greg Deliso was making the movie with me. She really likes his film Hectic Knife and asked to be in the whole movie instead of just a cameo, so we created the role of Nancy Banana for her.” 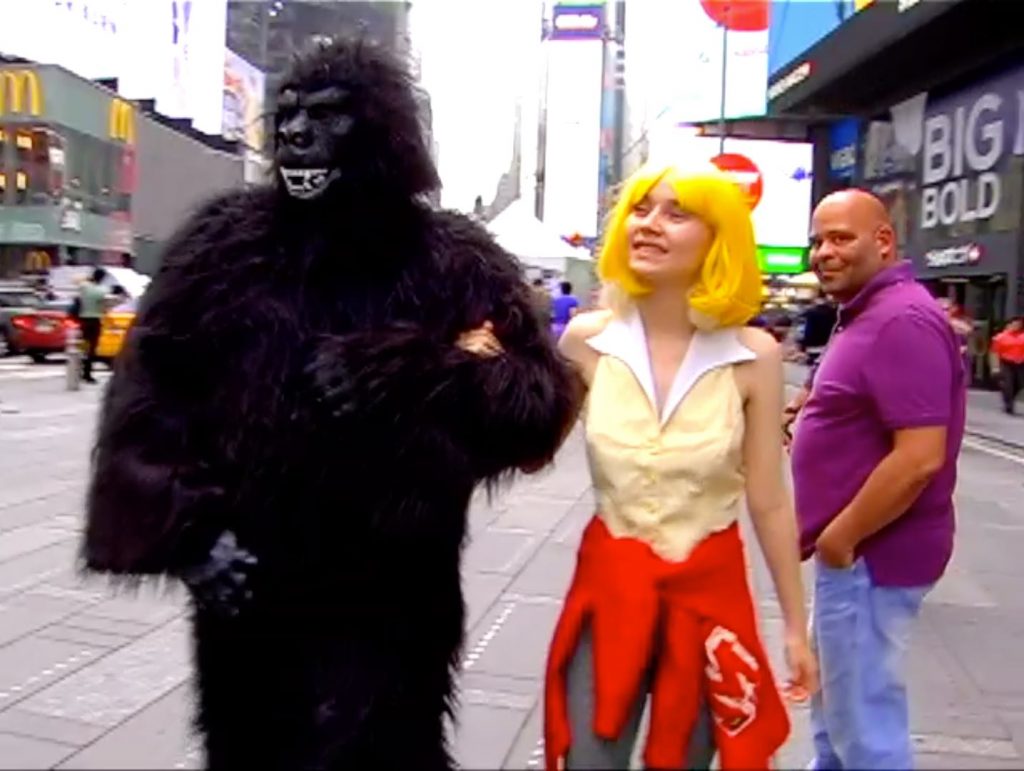 Why does ​Dr. ZOOMIS sound so ​familiar? Are there any other references to other movies we might have missed during our first viewing?

“Dr. ZOOmis is of course a reference to Dr. Loomis in Halloween. There’s a billion movie references in Psycho Ape!, like​ A Nightmare on Elm Street​,​ Halloween​, K​ing Kong, Forrest Gump, Mighty Joe Young, Jurassic Park, Get Out, Seinfeld, Inglorious Basterds, Avengers: Infinity War,​ etc. the list goes on and on!”

●  How many viewings of the film would you recommend? Do you have a list of clues and details to pay close attention to like David Lynch did for Mulholland Drive?

“Ha, Bill has watched the film about 6 times now and still catches new references. There’s a million movie references and jokes that most people will probably miss the first few times around. It’s like the movies ​Airplane!​ or ​Spaceballs​. There’s just so many jokes and parody scenes that people should probably watch it a couple times.”

●  How has the reception of the film been so far? How many screenings have there been so far? Has it been nominated for any awards yet?

“There’s only been one theatrical screening so far, at the Historic Howell Theater in October. Because Covid has shut down all theaters in Michigan again, I’m not sure when or if there’s gonna be another one. But reception so far has been very positive!”

“People have different tastes with good and bad movies. I love watching cheesy bad movies but they’re not for everyone. I find humor in a bad movie’s shortcomings. However, I am not a fan of ​Pootie Tang​, haha. Although, I do like the work of Louis C.K., just not that movie he made.”

●  If you could show this film to any great director, living or dead, who would you show it to and what do you think they’ll say?

“I’d probably like to show it to Kevin Smith or Quentin Tarantino. I bet they’d find the film funny. I’m not sure if they would think it’s good per say, but hopefully funny.”

●  What’s your advice to anyone who wants to make their own film?

“Any advice to an aspiring filmmaker is just to try and make a movie. We made Psycho Ape! with $7,000 and filmed it on VHS tape. So it’s possible to make a movie with virtually nothing, haha.” 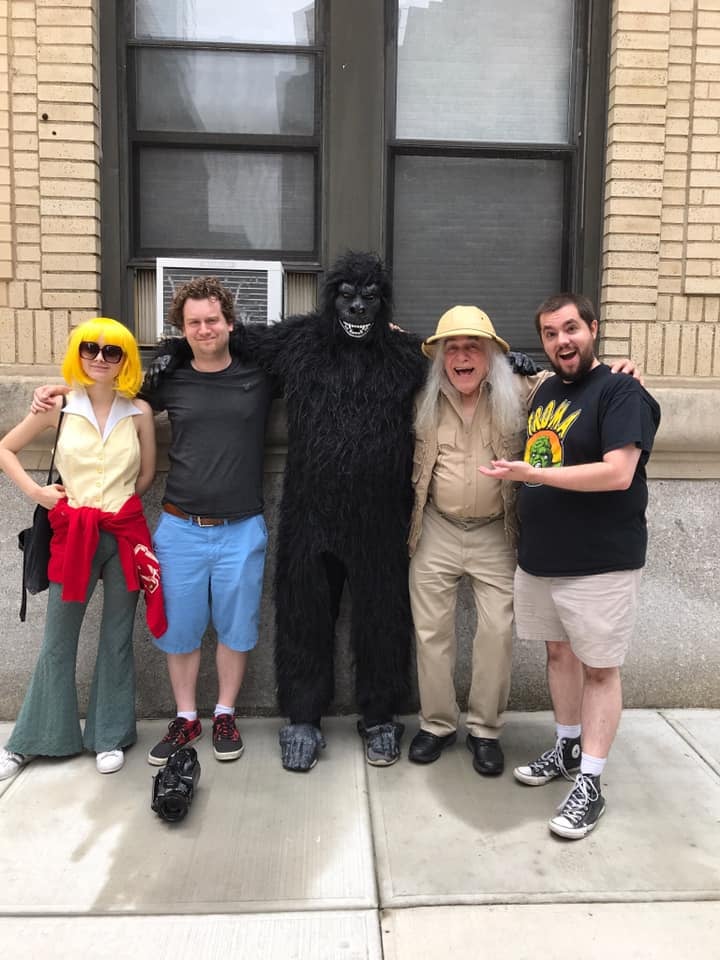 ● What’s your next movie? Any plans for a sequel? Or anything new upcoming releases from JAB Productions?

“My next movie is going to be The Cult of Frankenstein. I can’t afford to license movies for Tromasterpiece Theatre anymore so I’m just going to create my own low budget horror movies and we’ll riff them on my new show Roastmasterpiece Theatre. The concept is that my movie theater usher character, along with Corny and Reelie, will write, shoot, and edit our own low budget film “The Cult of Frankenstein” and we’ll riff on our own movie that we made ourselves. That’s pretty much all I have on my plate right now. I wanted to start shooting it in October but because of the increase of Covid cases and crappy weather approaching, I’ll start shooting in the spring/summer.”