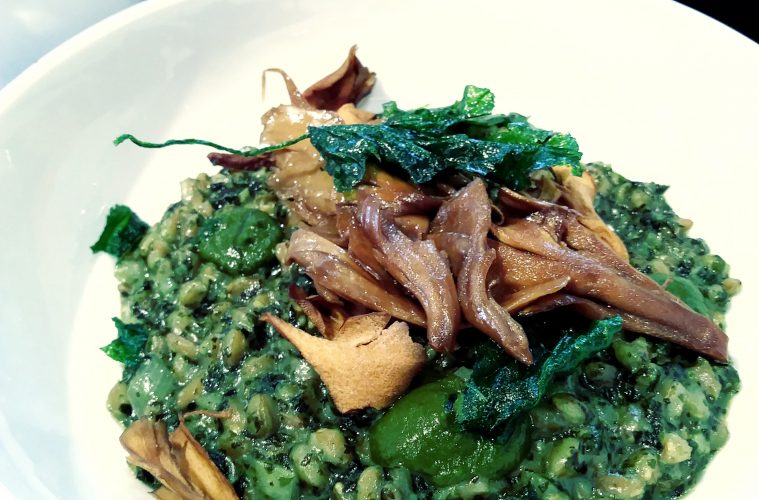 The Apparatus Room | This Is Not A Bad Review

Lady K and I have been meditating for some time now on how best to approach one of Detroit’s newest restaurant installations, The Apparatus Room, held within the Detroit Foundation Hotel.

When evaluating places like this, one must take into account who or what are the driving forces behind the food, drinks and design. K and I have visited twice since the Apparatus Room’s grand opening. And, honestly, ever since our first visit the atmosphere has given us a rather distant, yet familiar impression.

We’ve landed in the Canary Islands, minus any subtropical bits. Peckish from the flight over, we had dinner plans at the lovely hotel lobby restaurant. It was called El Corazón de San Cristóbal, or something like that, couldn’t say.

Only this time it isn’t the year 1820. We aren’t a bunch of men decorated with mustaches and tailcoats sipping brandy, and we are not about to discuss raping other country’s resources for the bounty and glory of industry or financial propriety. We are dining. And what a glorious, fashionable feast it was.

Can we back up for a moment?

Yes, it is true there still remains within us, and in fact within many fine dining establishments, a resounding romanticism of intricacies, delicacies and, daresay, garish design between both palette and palate. In my opinion, to boldly dismiss all of these social valuations would be a mistake.

Yes, there is a sense of romanticism of delicacies – the exoticness, nay the emotions, of the flavors, the oftentimes fragile and thus precious compositions.

Then there are intricacies, this is more of a general concept that takes hold in beverage programs, course plating and even interior corner moldings. 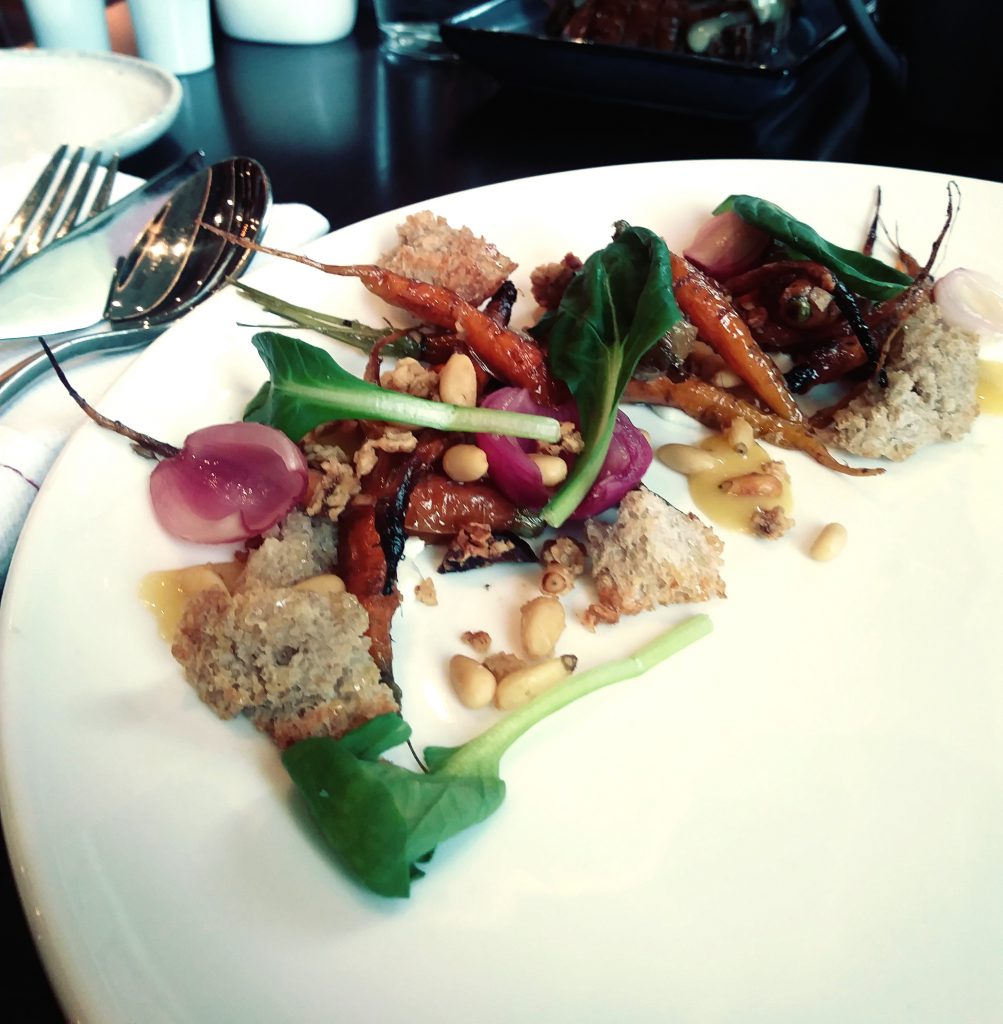 The Pine Roasted Carrot Salad was an attempt at these valuations. One can clearly see the frolicking intimacy of what Thomas Lents, the Foundation Hotel’s head chef who last worked the kitchen at Sixteen , Trump Tower, Chicago, was trying to achieve. However, this dish simply missed the mark.

The salad was weightless, and not in an uplifting way. Between my first bite and my last (to clarify, my second bite) I was at best indifferent. Unceremoniously, this dish has officially broken our tradition to not speak of cost, mainly because [to us] “food comes first”. But, in this rare $12, or $16, if you include tax and tip, instance, the ratio between quality, proportion and execution was simply wrong.

While the salad was a disappointment, it goes without saying that Chef Lents has and continues to create simple masterpieces within the contemporary food landscape. Exemplary of such romantic creations is Lents’ Sea Trout, which was recently captured by Detroit Foundation Hotel’s collaborating photographer, Joe Vaughn, as seen here.)

That out of the way – there were some true gems. 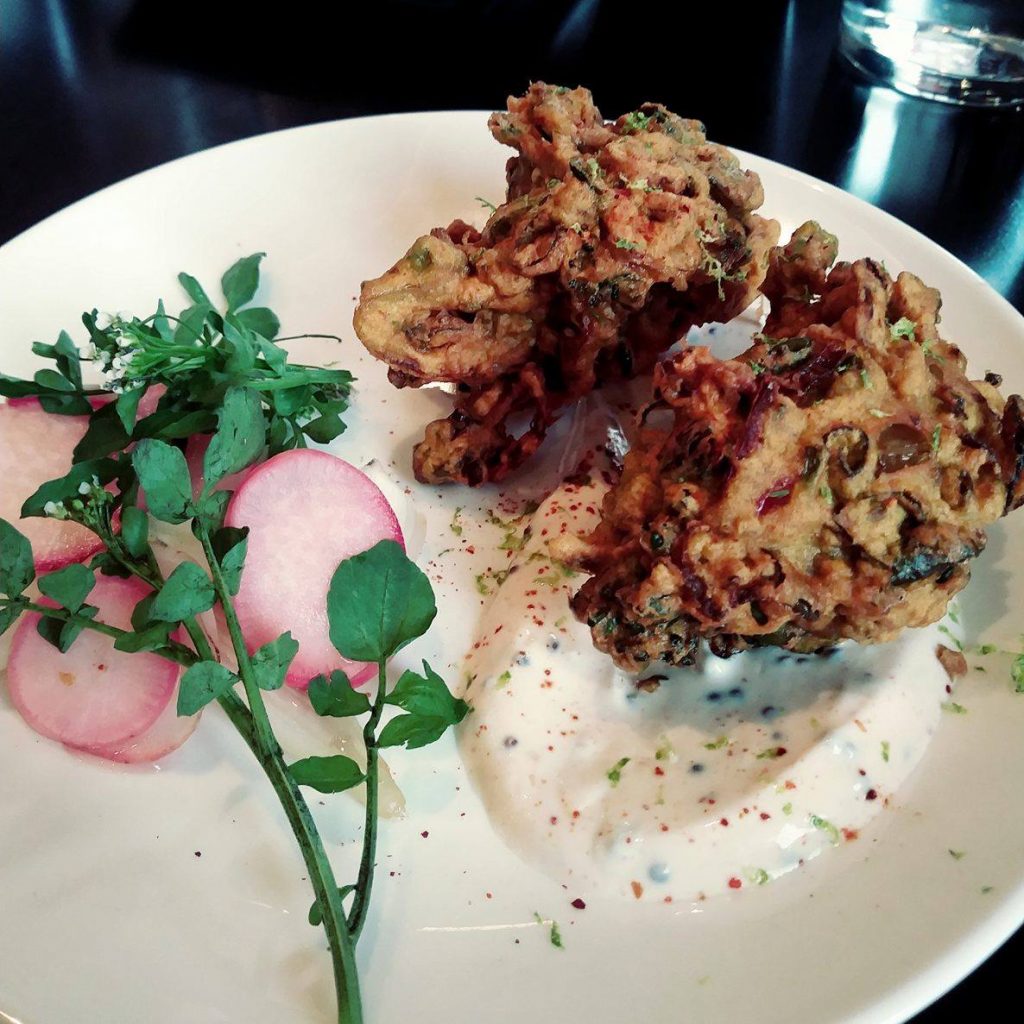 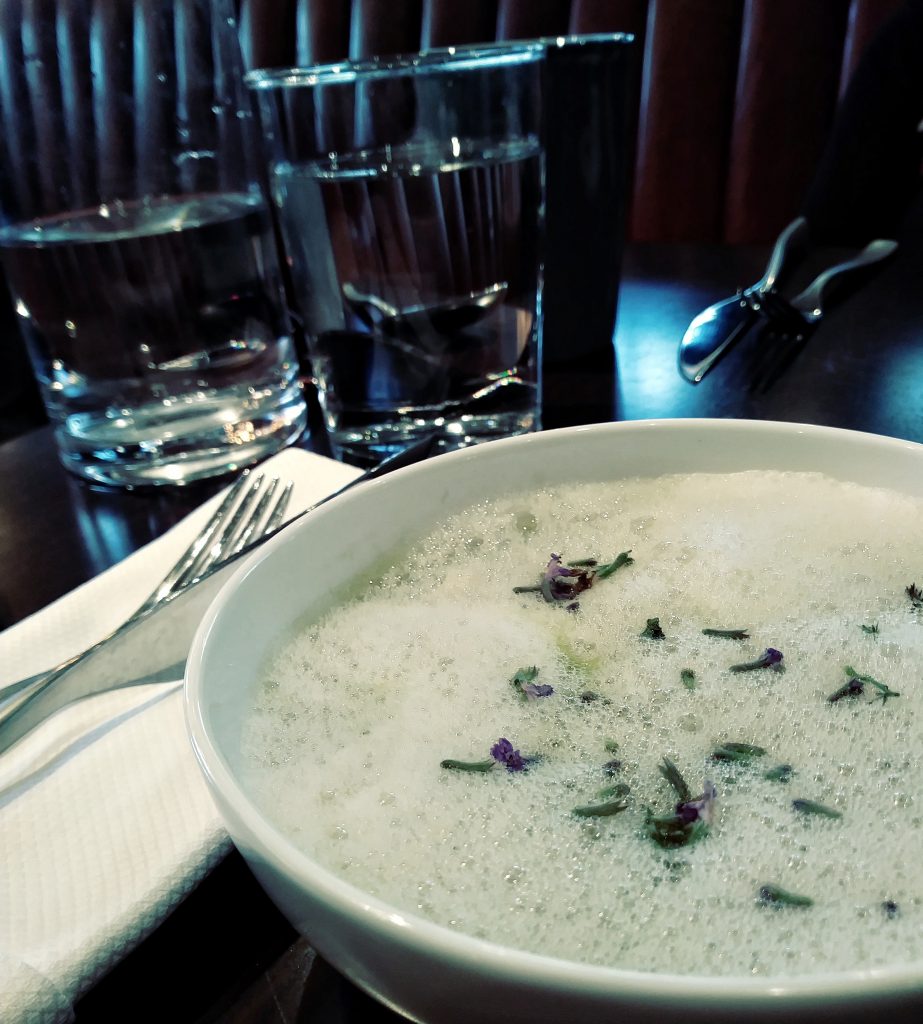 For instance, the Spring Vegetable Fritter and the Minted English Pea Soup were delightful. The Fritters were a fun, simple starter and consisted of fried pickled zucchinis on a bed of spiced crema. While neither of us could pick up any pickled notes, it’s flavor and texture, along with the crema, was spot on.

Ordinarily K is not that interested in foam or bubbles on anything. To her they represent a lot of fluff and no substance. But that was not the case with the Pea Soup. The body, primarily an onion base, was smooth and relatively mild, and the floral elements on top were subtle. It was as if the whole bowl was designed specifically to lube one’s senses for something rich.

After this particular starter soup, it’s most probable that many would follow with the Merguez Sausage or the Fusilli Pasta with Suckling Pig, but as vegetarians our main options were a bit more limited. Thus our decision to go with the Soup & Sandwich Board. 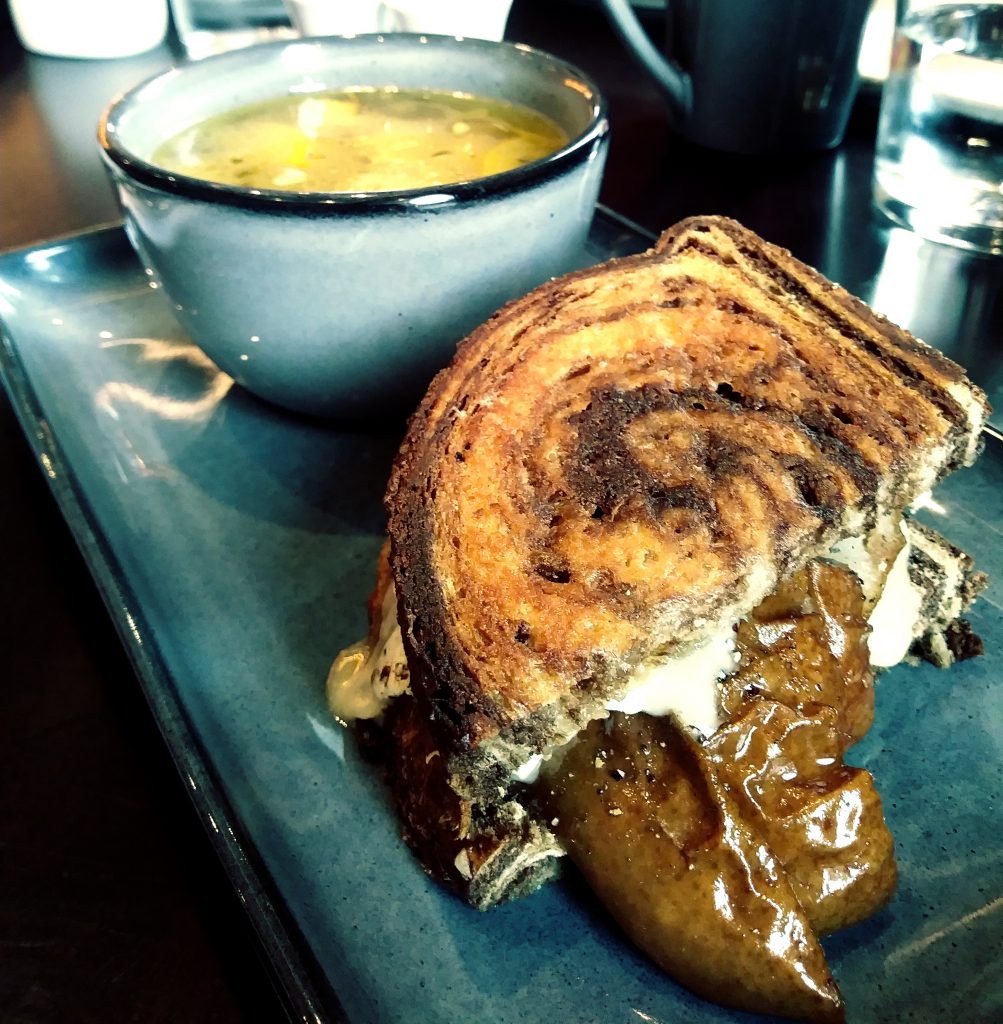 The Board consisted of a half cheese and pear sandwich and a cup of some type of vegetable broth (As this menu item changes frequently it isn’t guaranteed that it will be vegetarian in the future). Overall, I was pleased with the Board’s heavy handed sandwich fillings but, honestly, I’d have to agree with K’s summation: the side broth was forgettable and overall the dish needed a little more attention. 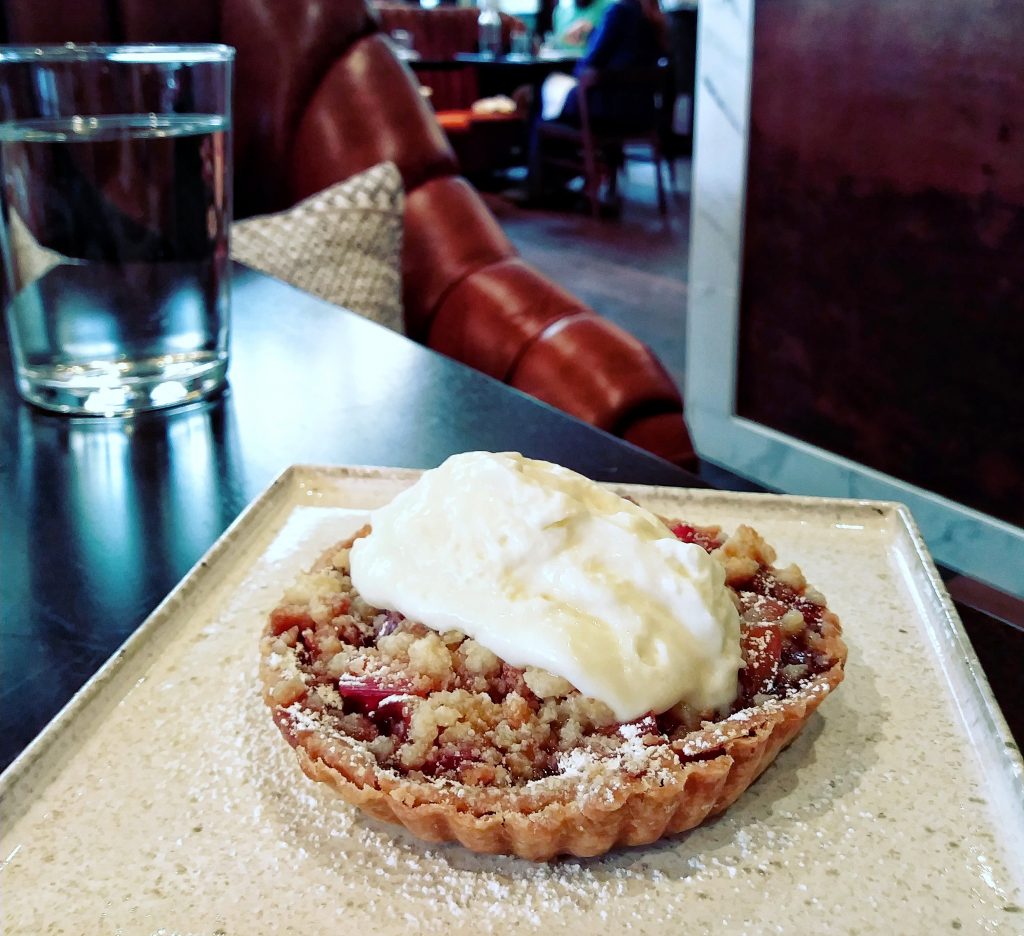 We requested for the Faro Risotto (featured top of page) and Rhubarb Pie to arrive at table together. By far, these were our two favorite dishes. The Risotto was very well balanced, rich and creamy but not heavy. Nor was it overwhelming in the slightest. The Risotto was topped with shitakes and fried nettles – of which I thought the latter a unique surprise. We could taste the care and patience this dish was given and though it was a main course, oft the core of a meal, we remained supple enough to bite eagerly into our dessert.

And oh, how lovely was our Rhubarb Pie!

Cooked perfectly, with a slight crisp on the exterior, pricks of rhubarb vegetation within, and finally softened on top from ginger whipped cream, the pie was certainly worth every bite.

All in all, The Apparatus Room combined good food with excellent service. Attention to detail, such as the twisted handle butter knives, the comfort and breadth of the space, and the rather inspiring ambiance, delivered Lady K and I another magical afternoon in the city.