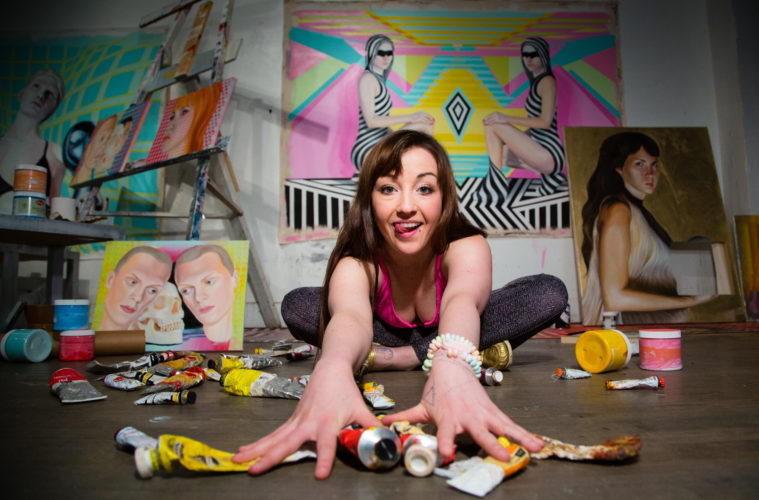 “What are you calling this painting?”

“Oh, I have no idea,” says Michelle Tanguay, one of Detroit’s more prolific artists creating in the city today.

We are inside Tanguay’s home studio in the Bankle Building – a three story structure in Midtown owned by world renowned artist and boy racer, Camilo Pardo. Tanguay’s space shares the ground floor and connects with the home studio of Pardo. Michelle is rummaging through her most recent work.

“Camilo and I are joking that it’s ‘Jacquelyn and Heidi’ instead of ‘Jekyll and Hyde’, because the girl wasn’t working. I had this whole idea in my head but it wasn’t working,” Tanguay is very open about her process, and laughs through much of her explanation. “Usually the academic part of painting, I have been doing that my whole life, so usually that works, but the reference photo that I chose wasn’t very clear, and I was like, ‘maaan, why I did I choose this blurry photo?’ and I didn’t like the eyes, but instead of starting over I said I’m gonna save it, and when I stopped caring about the painting is when I starting playing more.”

Tanguay’s studio is large, perhaps 1,000 sq feet or more, 20 ft ceilings, filled with colorful paints, art supplies and, as one might expect, a number of works in various levels of completion. There is no kitchen, forcing Michelle to dine out for every meal, often at the local Coney, or out for a bite at The Bronx Bar with her mentor, Camilo. There is a mid century rec-room sofa, a table, a few chairs, and an elevated bed where she sleeps. There are flood lights, a camera, music piped in from somewhere, the odd reference publication, and a few bowls filled with candy. Michelle loves candy. She is an artist, that much is certain, but she is also living the life of an artist that one usually must read about in magazines.

“When a painting is done, it’s the most satisfying thing in the world to me.”

“Then, I was like, I’m going to completely black out her eyes,” says Tanguay. “Then I took acid one night and I was, like, ‘got it; I know what I have to do’. So I just created this depth, and I started playing with the shadows in the eyes, and with the figures, and then it all just started to make sense; does it belong in the same series as those two pieces, I don’t think so? But, who knows, when I am done with those they may look more like this.”

In 2014, Red Bull commissioned Tanguay for 10 works she called her Lollipop series. That same summer, Sierra Mist commissioned Michelle as one of four artists to be featured in its Billboard project. She was a featured artist at 2014 Electric Forest. She produced a series entitled Face to Face, consisting of 80 portraits of friends, family, along with those who found their way into the studio. Many in the series are either featured on the ceiling of Complex Boutique (Birmingham), or hanging on walls of private collectors, though a number of the portraits were given to those who modeled for them.

The artists was also commissioned to replicate the classic oil painting that hangs above the swank bar in Detroit’s Wright & Co. The tempestuous image of an 18th century sailing vessel, being tossed about a stormy sea, evokes strong emotion from cocktailers while they sip upon their handcrafted libations. I found myself peering deeply into its crashing waves and thunderous skies one afternoon until I was compelled to ask the bartender about its creator. 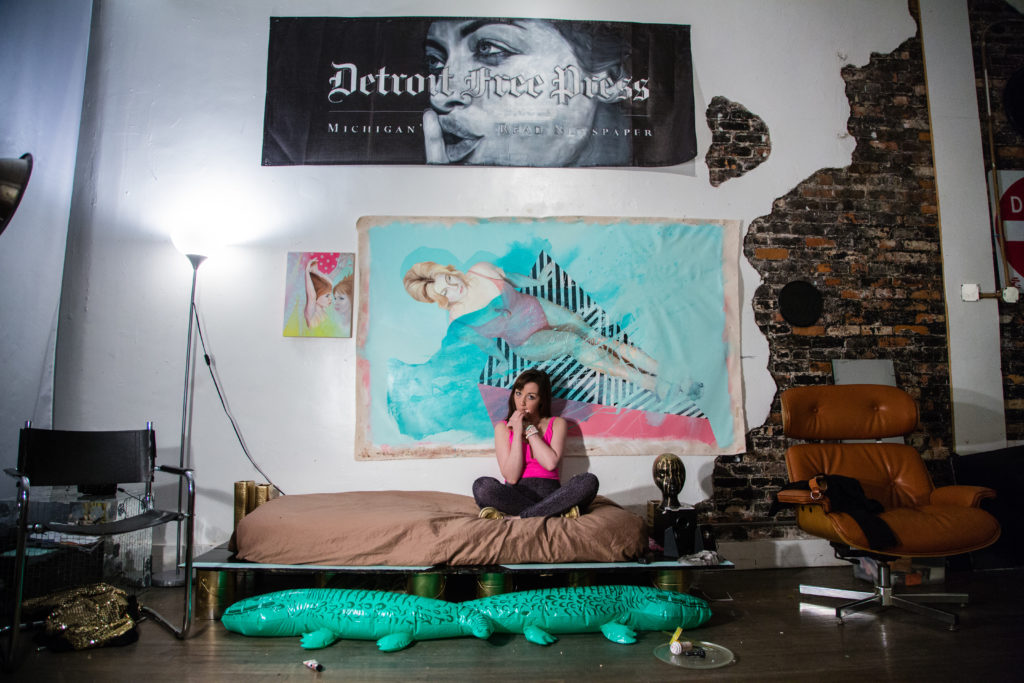 “I think the artist’s name is Michelle?” he said. “Michelle Tanguay?” I said. “I think so, let me check.” And, off he flew. I sipped my Sidecar and thought about the men who were on those ships, man vs. nature, my bills, and so on. The bartender returned and confirmed that, indeed, the artist was “Michelle Tanguay.”

When I asked her about the work, Michelle said, “That piece saved my life.” She then went into a story about falling completely in love with a man ten years her senior. She was ready to quit painting, get married, have children. The lovers even got tattoos of each other’s name on their bodies. But, then he began to have reservations about her work schedule; revealing what she felt were unfounded insecurities. Michelle didn’t make much of it until an argument over her participation in Electric Forest. She told her boyfriend she was going and that they would discuss it when she returned. That was the last time she would see him.

“He told me by text that he was going to kill himself,” says Michelle. She tried calling but he would not answer. “He told me that he loved me and that he couldn’t be without me, and then he sent me a photo of a noose around his neck, and that was the last thing that he did.”

Michelle was devastated. She spent the next month in depression. But, then she still had to finish the Wright & Co. piece. Ironically, Michelle had taken the advance of that painting and went on a road trip with her boyfriend before he had committed suicide. All of her emotions, her self therapy, and her healing are now inside that work, a tumultuous palimpsest of life, struggle, death, and life once more.

Michelle is currently working on 6 paintings for her new series – which, at this interview had yet to be named – bouncing around from painting to painting, working flesh tones, moving from color to color, in an energetic explosion Pardo refers to as ‘binge work’, and fueled mostly by sugar, desire, and a complete lack of sleep.

“When I’m excited about painting I can’t sleep. I just lay in bed and I’m thinking about this thing that needs to be done,” says Tanguay. “When a painting is done it’s like the most satisfying thing in the world to me. I’ll be working, sitting in front of a canvas for like 20 hours, that’s why I never go out, then Camillo comes in and says, ‘you’ve gotta stop.’”

Michelle is now sitting on her vintage basement sofa biting from a candy bracelet. “It’s nice to have people come over while I work. I don’t drink, but I eat a lot of pizza.” For a moment she is still, staring across a 20 foot expanse that separates her from her art.

“I hate painting small, its just torture. I like painting big, you get to use big paintbrushes. As a kid, I remember walking into a museum with my mother and seeing this huge Monet, covering this entire wall, and feeling like I was just consumed, the painting just ate me. But, I also remember being devastated because I went to that museum to see Salvador Dali’s Melting Clocks and it was the size of a postcard – I think I cried.”

The artist considers hers to be an unconventional profession, and understands that it’s hard for people when she doesn’t answer her phone or texts right away. This, she explains – presumably, along with the tragic loss her boyfriend – makes it difficult to establish lasting relationships.

“I’m the worst version of myself when I am in a relationship. It just doesn’t do good things for me. I’ve been head over heals in love but it’s never worked out for me,” she says. “Usually I date someone right after I finish a series for like two weeks, and so I’m with them 24 hours a day seven days a week and it’s great spending so much time with one person, and I’m a very intense person, but then I have to get back to work, and I’m just gone.” While she speaks on the subject she is in good spirits. I detect no sense of self pity. Just the mind of an artist who needs to paint.

“Now, I make that person aware of that process. I just always have to be doing something, so I’m like, let me do something for you, let me paint on your walls, lets do an art project together, or let me build you a website,” she says. “It’s funny, because my godaddy account, I have all these domain names for all these guys that I’ve made a site for, and their websites are still up, and the last time I was with a guy and I was making him a website he said, ‘what’s with all these websites?’ and I was like, these are all dudes who I made a website for.”

She laughs and takes another bite of candy.

“I feel guilty, but I feel like, if I leave your life after like a month, I have all these things that I’ve done for you, and at least those things are positive and have bettered your life.”