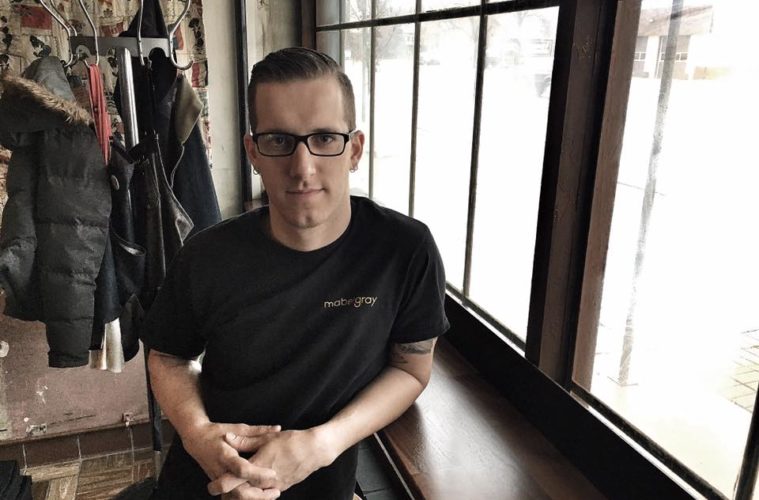 James Rigato unlocks the front of door of his new restaurant, Mabel Gray, located in the up and coming neighborhood of Hazel Park, wearing denim pants and a black tee, which offers a glimpse of the ink that is tatted beneath. He wears black framed glasses and dones a classic gentleman’s cut, seemingly fresh from the barber.

It’s early morning and Chef Rigato’s restaurant is empty, save for a few members of his staff busy prepping for this evening’s menu. He walks behind the bar counter and asks if I’d like a coffee.

“Yes, thank you,” I say. And, then I watch as Bravo Network’s Top Chef contender, and co-owner, executive chef of famed The Root restaurant in White Lake goes to work on a French Press. Even in the simple act of making coffee, Rigato moves quickly, confidently, and with purpose. Moments later, the Chef spins around with the press, and a vintage cup and saucer.

We sit at one of the four top tables that line the length of the wall. The space is long, narrow, and deep, seats 43, and was inspired by a 500 word essay composed by Rigato. Brought to life by Ron & Roman Design, the team combined vintage Michigan diner with, perhaps, a 1960s mod bar. The interior boasts plenty of wood, bright orange walls, white banquette, with various cooking artifacts, and a brilliant mural by artist Greg Oberle. The bar and kitchen, which runs opposite the tables, was left open, thus bringing together both chef and customer.

“My first exposure to Mabel Gray was a song by the band Brown Bird,” says Rigato. “David Lamb – the leader of the two piece, husband and wife duo – passed away over a year ago. He just had a great voice, and I love their music.”

The song inspired Rigato to research the actual Mabel Gray. He discovered she was a woman who lived on her own in the dunes of northern Indiana. To escape city life, she moved into an abandoned cabin in 1915, and after her death became the origin for the legend of the ghost “Diana of the Dunes”.

“Mabel Gray and Hazel Park has the same vowels, the same structure, they’re both very feminine,” says Rigato. “I wanted Mabel Gray to be a very feminine space in a feminine town, quaint, but with a bit of feistiness, like a woman you’d like to meet”.

Regarding the location of Rigato’s restaurant, he seems confused, if not bothered, by the talk of some about a city he clearly cares for. “If you want to have a conversation about how cool Hazel Park is, fine. But, sometimes, people ask, ‘Why Hazel Park?’ as if to say it’s not up to par with my restaurant,” explains the Chef. “They use terms like ‘blue-collar’ as if it’s a negative. But, I don’t see it that way. I see a restaurant and town that match perfectly with one another. This is literally where I hang out. This is not an accident.”

Rigato lived on 11 mile and John R. in Madison Heights for nearly seven years. He hung out in Hazel Park and states that he appreciated the fact that there was and remains little to no corporate presence.

“Being a border town, Hazel Park has a Detroit influence, it’s filled with tool and dye shops, but it also has its own attitude,” he says. “The racetrack [Hazel Park Raceway], Loui’s Pizza, all these small shotgun buildings, the dive bars, Hazel Park has always been my kind of community.”

James says he loves Pi’s Thai, a small neighborhood carry-out, and claims to be a regular at HP landmark, Loui’s Pizza. “ If you go over there they probably know my order. And, Steve Sorenson behind the bar is a great guy.”

Born and raised in Howell, Chef Rigato also appreciates Michigan’s more rural settings, calling himself a “bit of a Michigan slut”. He travels the state regularly, and says he cannot stand getting on a plane to visit places like Florida. The chef likes to visit his godfather on Lake Huron in Harrisville, and spends a good deal of time kayaking Crystal River near Traverse City.

“I’m up north all the time. I go to the UP, I’m a regular at the Harbor House and the Fitz in the Keweenaw,” he says proudly. “Depending on what part of Michigan you talk about there are restaurants that I love.” And, he definitely has his favorites. “I like Trattoria Stella and La Becasse in the Traverse area, and I’m at Stein House in Marquette.”

But, the thirty-something Chef doesn’t confine himself completely to the Great Lakes State. In April 2015, he and his girlfriend drove cross county covering 7,500 miles in 25 days, exploring Portland, San Diego, Austin, and back again on a journey the Chef likened to the historic Lewis & Clark expedition.

“Through the Rockies into Utah was the most dramatic part of our trip, I think, seeing all the intense snow, and then flat lining and seeing the old seabed, the changes in elevation,” says Rigato. On the road the couple enjoyed everything from taco trucks in LA to a little known restaurant in an old house in Salt Lake City.

“Forage is phenomenal,” says Rigato. “ There are no Michelin stars attached to it, but there should be. I mean course after course from this wonderful Chef Bowman Brown was just fucking brilliant!”

Just then, Chef Rigato yells out instruction to his sous chef Sam, who also happens to be his girlfriend, “Will you pull out the lamb bones, and the white fish bellies, and then put that beet in!”

“We also ate at Loveless in Nashville, an old diner,” says James, as he returns the conversation back to me. “It’s like a fuckin’ commune, looks like something I want nothing to do with, but it’s fuckin’ awesome, with a smokehouse, country ham, biscuits and gravy, Bloody Mary’s, and the kind of coffee that one cup makes you shake.

Rigato has been to Mexico, France, and throughout the Caribbean, but insists that he really prefers Michigan, with its people and change of seasons. “I like Detroit, the Do-It-Yourself attitude, I just hate the corporate, sterile presence, really in anything, so towns like Ocean Beach California really resonate with me, they were like the only place that picketed Starbucks, so for me it’s places like Austin, Memphis, Nashville, Detroit.”

“Speaking of Detroit,” I interject. “What are your thoughts on the current explosion of restaurants?”

“I think the restaurant boom is a good thing, economically. But, I also think the talent pool isn’t necessarily increasing, though the number of restaurants are. I think that’s a dangerous thing. We have to be careful not to oversaturate the market with inferior product,” he replies. “At the same time, we’re also importing a lot of good chefs, so that’s a good thing too.”

“Is the talent pool primarily chefs,” I ask. “Or, does that include service, and owners?”

“Oh, all of the above. There’s only so many restaurants, and so many chefs training so many cooks; as those cooks become sous chefs, and those sous chefs become chefs, you’re thinning out the strength, you’re diluting the pool,” he says. “You’re asking for people who aren’t ready for those certain positions to be put in them. And, then what are the odds that you have a dynamic restaurant scene when you have people who are overwhelmed, or not prepared for the position?”

Rigato says he received his first offer to be executive chef when he was twenty-one, but declined. “I was like, are you kidding me? I’m twenty-one. I’m not taking this position. I’d be running off whatever ideas I had at twenty-one, and I’d be out of them within two months.”

Describing cooking as a muscle of knowledge, Rigato maintains one must think about it philosophically. “You can’t just say, ‘I know how to braise, I know how to roast, I know how to sear and chop, boom, I’m a chef’. I’ve grown so much as a cook, a chef, a person over the last 10 years. Sure, I would have had a better pay day, but that’s not what it’s about.”

Mabel Gray offers a new menu daily, with its chef changing anywhere from twenty to one hundred percent of its content. According to Chef Rigato, there are a lot of variables when writing a menu.

“I once wrote a ‘How To Write A Menu’, with about 15 things in priority: Day of the week, seasonality, utilization of product, to cost,” says Chef. “There is definitely an art to it, but it is mostly craftsmanship, because if you have an idea but you can’t actualize it . . .”

He leaves the result hanging.

“Writing a menu for a business is one thing, but writing for a dinner, or a group is another. You need to approach it ‘Who, What, When, Where’. For me, it becomes very philosophical.”

“Where do you get the ideas for your dishes?” I ask. Are you thinking of them in the shower, or calling them up in dreams while you sleep? Is it like music? Like musicians sometimes write songs?”

“That’s a good analogy,” Chef says. “Like music, maybe the beat comes first and the lyrics later. But, sometimes, the lyrics come first and I want to add to the beat; ‘I want to make a traditional flan’, I want to make crispy octopus.’ When you see a big, wood fired oven, you think of lamb, so I’m all over the place, there’s not one thing that inspires me.”

“What is it that separates good from great chefs? ” I ask.

“I’m not the greatest chef, even in this town, but I just love good food. I have a philosophy that says ‘I only want to eat delicious things’,” Rigato replies. “I’m wrapped up in the romance of the moment. I want to make love to the experience and not necessarily the data.”