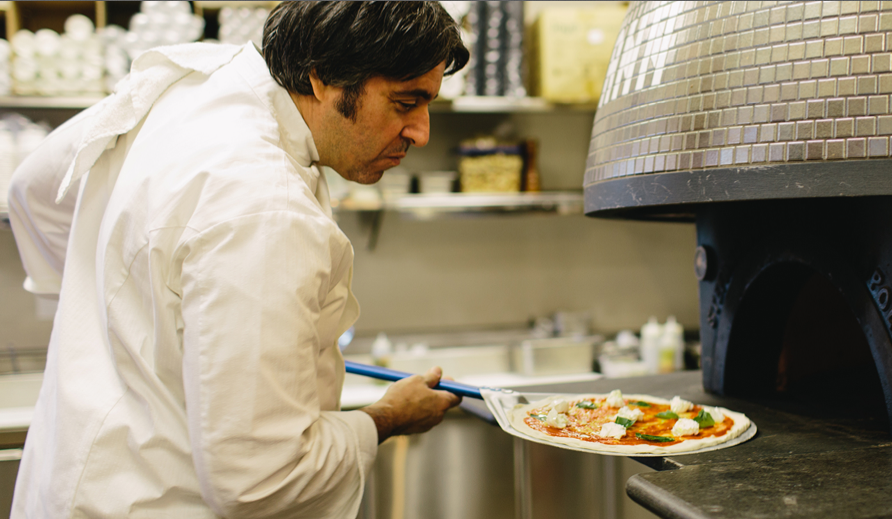 Chef Luciano has been making food since age 14. He began under the guidance of his Italian family, who moved to the Detroit area from Abruzzo, Italy, an area just east of Rome. Luciano was charged with the responsibility of operating his family’s restaurant, Fonte d’Amore, in Livonia, before he opened his own, Bacco Ristorante, in Southfield, which has become one of the regions highly acclaimed restaurants. Chef Luciano has been nominated for the James Beard Award three times and, let’s just get this out of the way, looks like Al Pacino.

With locations in Ann Arbor and Southfield, we chose Bigalora Royal Oak for our experience. Upon entering, we discovered artwork by Detroit artist Camilo Pardo in the foyer and the room’s streamlined, contemporary bar area. Aggressive, racecar oriented works are not what first come to mind when thinking of natural, proprietary pizza. But, it quickly all made sense. Who better than the Italians to combine good food, wine, art and racing?

We were seated at table with co-owners Michael Chetcuti and Kyle Evans, who quickly ordered wine. Metropolitan columnist, Jeanette Frost, joined us. With Chef Luciano en route we covered a few preliminaries.

“At Bigalora we stress a fun, energetic, pop-Italian atmosphere with an emphasis on clean, organic, fresh, delicious food,” began Chetcuti. “Our pizza is really unlike anything you’ll find in the United States, and our menu is very diverse and includes house-made pastas, salads, small plates, and gelato. We also have a very progressive craft beer, wine, and cocktail program.”

“All of your ingredients are organic?” I asked. “Yes. We rigorously seek out only the finest ingredients, with a strong emphasis on local whenever possible,” replied Chetcuti.

“We love the Camilo artwork,” said Ms. Frost. “How did you come by it?” “Camilo and I have been friends for a long time,” replied Chetcuti. “And, we really feel it works well in this room.”

The next 15 minutes were filled with the four of us discovering our six degrees of separation, and getting an idea of the business philosophy behind Bigalora: A refined, casual dining experience, offering clean food, at a competitive price.

“What is the culinary landscape of Metropolitan Detroit at the moment?” I asked. “It’s really rising out of the ashes of the 2009 economic downturn, which was far scarier in Detroit than in the rest of the country. It’s now more active and diverse than at any point in my lifetime,” Chetcuti said.

“There are interesting things happening from the Grosse Pointes, to booming neighborhood scenes in Detroit’s Midtown and Corktown, to renewed suburban dining areas in Birmingham, Ferndale, and even as far out as Fenton,” added Kyle Evans. “The emphasis remains refined casual rather than fine dining, although fine dining appears ready for a resurgence.”

Another 10 minutes of introductions, a little history, many laughs, and then came the small plates. My first taste was of the Wood Fired Heirloom Carrots. Wow. It isn’t often one has a first experience with new flavors seated before the top rated chef who created the dish. This is a plate I would have never ordered myself. Now – I can’t stop thinking of it.

“So what’s it like being married to a Chef who prepares food like this and looks like Pacino?” I asked Monica. The table laughed. It seemed apparent Luciano had heard the comparison before. “Oh, it’s not so bad,” said Signora DelSignore.

Ms. Frost was silent, lost inside a Risotto Ball.

The pizzas came and Luciano graciously plated them for each of us. “Take a bite of the Margherita first,” he said. “It is the standard of Italian pizza.” Jeanette and I followed instruction and I was immediately thrown back to that summer long ago on the shores of Alassio, Italy, where my brother and I had spent a week sunning, swimming, drinking, and eating pizza.

“Our pizza is leavened in the pre-fermented ancient style that Italian bakers call “biga,” said Luciano. “It doesn’t contain any yeast or sugar, and this makes for a better tasting crust and texture. It’s also much easier to digest. You won’t feel filled up after eating.”

“There is so much bad stuff being put in our food,” Monica said. “Are you familiar with GMO’s?” “It’s terrible,” Luciano added. “It’s very difficult to find healthy food when you’re going out to eat.”

“Our dough ferments for 72 hours, without the use of yeast or sugar, before being placed in a wood burning oven for 90 seconds at 900 degrees,” continued Luciano. “That’s where you get the unique charring on each pizza.”

Luciano’s pizzas and small plates were both beautiful and delicious. The room was alive with artwork, good design and an up casual crowd that, by the smiles on their faces, seemed to be enjoying both food and atmosphere.

For the next hour we discussed Genetically Modified Organisms, travel, pizza, relationships, a little politics and, of course, family – always a big topic at an Italian table.

There are several causes that I’m passionate about. Most of them are related to organic, Non-GMO (genetically modified organisms) foods. A favorite of mine is the Non-GMO Project. It’s a non-profit organization committed to preserving and building sources of non-GMO products, educating consumers and providing verified non-GMO choices. There’s even an App for your smartphone that helps you find products, brands and supporting retailers. It’s a great tool to use in the grocery store.

Another great App to take to the grocery store is ShopNoGMO. It’s easy to use because it has a shopping guide listed by categories. It also contains a list of hidden GMO ingredients, which is helpful since it is becoming increasingly difficult to find “clean” food as manufacturers use labeling “tricks”.

Anyone questioning the safety of GMO foods should go to occupy-monsanto.com. We have the right to know what we are eating and where it came from. If each of us would buy organic whenever possible, we would increase the demand, allowing more organic farmers to make a living, which in turn would lower the prices and let us return to eating the good food we were intended to eat.

I’m not an expert.  I am a consumer that takes the time to find the best way to keep my family and myself healthy.  It’s been my husband’s philosophy to offer the highest quality food to his customers in our restaurants.  If we are what we eat then it really does matter.