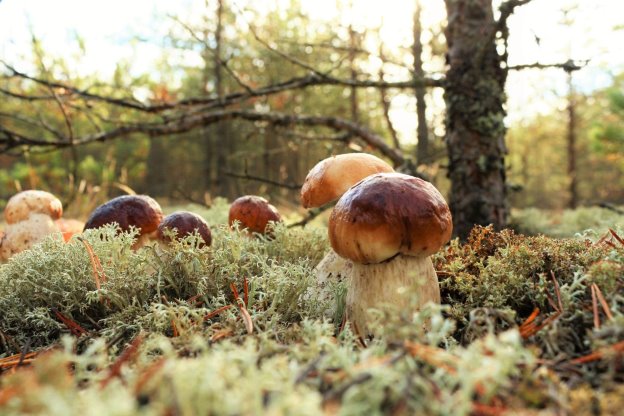 400 varieties of edible fungi, bountiful forests, and mushroom picking championships lure avid foragers to Lithuanian woods in early autumn. Both a beloved leisure time entertainment and a means to stock up the pantries before winter, mushroom picking has become a fall staple in the country.

Mushroom picking might be rightfully called a Lithuanian national pastime as avid mushroom pickers flock to the country’s bountiful forests every autumn. In fact, mushrooms are deeply embedded in Lithuania’s folklore, while the foraging tradition dates as early as the 14thcentury.

Mushroom pickers’ secret spots are passed down from generation to generation, bringing the families together in preparing and devouring this delicacy. Although Lithuanians used to forage mushrooms to stock up their pantries in the olden days, now the activity is regarded as autumn-specific entertainment and the chance to take in the beauty of the changing seasons. Strolling under a canopy of golden leaves, inhaling the smell of pine and earth, or watching how the mist rolls into the wide expanse of the woods adds another layer to the excitement of chancing upon some mushrooms.

Experienced mushroom pickers have plenty of opportunities to showcase their skills at Varėna Mushroom Festival in southern Lithuania. The town, situated deep in Dzūkija, is synonymous with mushroom picking and is sometimes called the Capital of Mushrooms. This year the 25th anniversary of the festival tested the sharpness of participants’ eyes and their knowledge of the surrounding greenery. Aside from picking hundreds of mushrooms, the contestants also took it upon themselves to clean the forests along the way.

After scouring the woods in Dzūkija and filling the baskets with mushrooms, foragers can visit other gems of the region. Druskininkai, Lithuania’s spa town, is an alluring post-foraging destination for its many spots to immerse in healing mud baths or relax in therapeutic salt chambers. At the same time, mushroom pickers who prefer some water-bound exploring, can head to Lazdijai District. It boasts of over 150 lakes, Lithuania’s largest river Nemunas, 21 castle mounds, and Meteliai Regional Park, which is home to 113 endangered plant and animal species.

King boletes and chanterelles—mushrooms favored by all Lithuanians

Baskets bursting with mushrooms are the highlight of every foraging trip. Although there are about 400 edible mushroom varieties in Lithuania, all glory falls on the few favored by locals: king boletes, chanterelles, birch boletes, orange oak boletes, red pine mushrooms, russulas, and several others. Experienced foragers know the many varieties at first glance, while amateurs stick to picking well-known mushrooms to be on the safe side. And if none is found in the forest, locals sell jars full of them along the roads or in town markets so that no mushroom picker should come home empty-handed.

Even though mushroom picking might make for a fun family day trip, tasting the harvest is another experience. Whether as the main character in soups, stews, pastries, sauces, dumplings, or even cheese, or a side dish that complements meat or vegetable dishes, mushrooms are a frequent star in Lithuanian cuisine.

Professional chefs also love using mushrooms as their secret ingredient in seasonal dishes. Surrounded by the emerald woods of eastern Lithuania, Labanoras Restaurant makes the mushrooms shine in any dish: pickled Yellow Knight mushrooms with sour cream and potatoes, fried forest mushrooms with salad, or boletus soup will tick all the boxes of a mushroom dinner. Miško Natos in Kaišiadorys District entices mushroom enthusiasts with a champignon soup with roasted mushrooms and bacon, as well as pasta tagliatelle with brown champignons and chicken breast. Etno Dvaras, a traditional Lithuanian cuisine restaurant chain, even goes as far as to create an entire dining experience—their thick wild mushroom soup is served in a bread loaf bowl.