Starting last August, a small team of enthusiastic, community-minded, young doers based in Detroit set out to produce a free kite festival on Belle Isle. Already on the scene and incorporated as a 501c3 non-profit, spearheaded by Margo Dalal, the group began to structure their framework. Gentile buzz words and mission statements started flying around and before I knew it I was hit with this:

“Detroit Kite Festival will elevate community by uplifting kite flying and creation as a platform for radical inclusion, communal play, shared healing, and the celebration of culture and history”

Damn. That is certainly an ambitious mouthful. Most of these festival goal-sets make perfect sense though: ✔communal play, ✔shared healing, ✔celebrating culture and history. What is it about radical inclusion that is intriguing? By definition this phrase means acceptance of those who have taken different paths and express themselves differently. But, did you know radical inclusion is also one of the ten guiding principles of Burning Man? Completely different I know, but Burning Man has been an official non-profit since 2014 and was incorporated around such ideals.

In the Detroit context radical inclusion could mean just about anything. It could be tackling issues of race, class, gender, identity, religion, culture, among others. And maybe in a hopeful but humble way all of those issues are exactly what this group is trying to do, allowing the act of kite flying and kite making to be a peaceable medium between differing camps. There is a blogpost series on Burning Man that delves into the ten principles it was built upon, and in several instances I found that Radical Inclusion was often at odds with Radical Self-Expression – a concept around the unique gifts you bring as an individual in relationship to other, or in a broader light otherness. 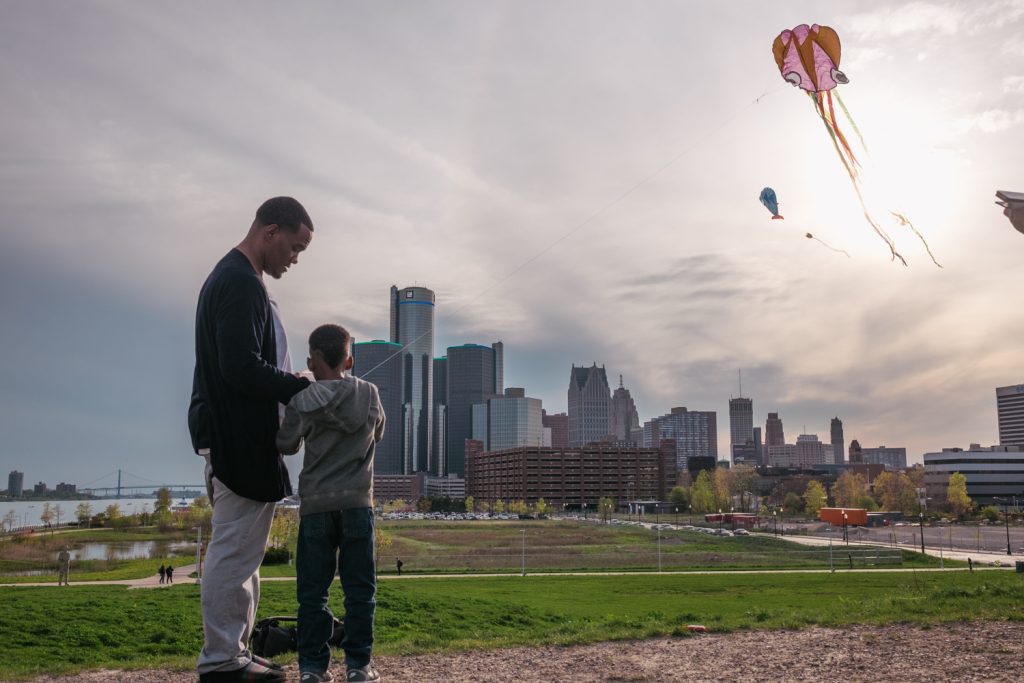 I began to think – perhaps this aerial platform is actually a good approach to sociopolitical barrier-blasting and radical inclusion. An individual’s relationship to self-expression does not have to be in isolation from inclusion and communalism. The unique gifts an individual brings can most certainly be a material of constructive inclusion and for the benefit of the greater community. A good representation of this could be the sharing of food with strangers and the hungry, the collaboration of building complex multi-tetrahedral kites, or even coordinating with neighbors to carpool or ride bikes together to the festival.

To this end it is most prudent and commendable, in my opinion, that the Detroit Kite Festival is a non-profit run entirely by volunteerism, that they seek a variety of local and affordable food and drink options, that they actively include and provide for free and engaging workshops and activities open to all ages and with partnering organizations, and most importantly that it is a free festival without the borders produced by fences – open flow.

It was no surprise when I discovered that the group had won the Belle Isle SOUP last summer, which awarded just shy of $1,000 to seed the fest’s realization. And within months, the group had secured working relationships with the Belle Isle Conservancy, the Michigan Department of Natural Resources, Detroit Institute of Arts – along with a Fresh Era Detroit sponsorship and a slew of participating community organizations. They had over 100 individual donors that rose online via Patronicity, a soft $11,143, which was $3,643 over the original goal. And on top of that they received a matching grant from the Michigan Economic Development Corporation for $7,500. In short, another small success story coming out of Detroit, kudos.

But let’s back up a bit. Honestly, at first I was a bit skeptical about this whole thing. Yeah I like kites but I am not a kid anymore. And do we really need a kite festival? You are not going to catch me on a Sunday afternoon, stringing triangles and jotting in the fields, arms extended. Regardless, I followed their crowdfunding page and later attended a kite making workshop the group led at the 19th Annual Allied Media Conference. Somewhere between watching their campaign and building my own kite I remembered flying kites when I was kid.

I couldn’t tell you their color or patterns or shapes, only that they had tails and on many occasions, after just a few short runs I had managed to get them airborne. I remember clutching tight to a kite in the car, worried it may escape out the open window. I remember on many occasions it being party cloudy – with the fear of a storm always threatening my fun. And now, looking back at these obscure nostalgic points, the act of kite flying was so much more than just playing in the park. It was a feeling of freedom. It was representative of my own strength and understanding. It was trust and care. And in some way there was always an uncertain amount of empathy of my little personified kite. I was entrusted with my kite’s well-being just as my sprite friend was responsible for my vicarious wings.

Flying a kite is more than just the novelty packaging they are given at the dollar store, they are more than just a craft project with the class – they are and most certainly can be a spirited experience, nay a spirit of you. The idea of liking a kite isn’t fair to me, or you, or anyone, because it can and most certainly has been so much more than the neutrality of the word like. It can be love. It can be joy. It can be laughter. And in a most sincere and earthly fashion, it can be a crude catalog composed of momentary thoughts and tragic pasts. It can be all of these things or none of them, which in a most simple fashion is a lively kite’s gift to you – pure, imaginative and unabridged movements of spirit.