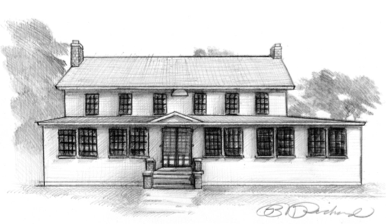 If you are from Michigan I am sure you have heard the words Sleeping Bear Dunes. If you have not and just arriving, you may want to. When I had my first car I, like many of us, had one big question, a common one for those with a sense of searching. What is at the end of that road?

At times, even without looking, one can find a little magic in unexpected places. A cool crisp September morning and a clear dawn found two young couples in a Chevy floating through curves of cedar, birch and pine on M-22.

It was the first time they had been in this part of the state. They seemed to be the only car on the road. It gave them a sense of quiet in motion. Crystal Lake came in the next bend and they pulled over by its shore. There was not a single ripple, and the lighting . . . the lighting was just right, giving the lake color and clarity, an unforgettable image of a still life by some great master.

A few miles farther north and the Chevy crossed a bridge on the Platte River. A sign read “Riverside Canoe Livery” and they planned on coming back to paddle its run to its mouth in Lake Michigan.

North, they drove, until they came to M-109 and the Sleeping Bear Dunes. Turning west, and having gone just a few miles, they passed a magnificent mound of white sand rising some 300 or 400 hundred feet. Deep green dune grass bordered the hill, nature’s hand spreading and balancing it beautifully over the immense expanse.

The road went up and over a rise and cut through a hilltop with a row of slender aspen standing free on the ridge. Over it, the lake called Michigan came up in view, shimmering in stunning green blue, deep, deeper blue until it reached the horizon.

M-109 gave out in Glen Haven. Many years earlier, the village port town had a huge dock built for shipping timber and fruit. In this particular year, there were a handful of small buildings; half were empty, standing reminiscent of its lost life.

A white clapboard, two story structure, “L” shaped, stood on the corner and their Chevy pulled in alongside a few other cars. The two couples got out to look a little and noticed the simple small wooden sign over the door – “Sleeping Bear Inn, 1857”. A front screen porch faced the lake, clean patches of dune grass in small white mounds waved silently in the fresh morning. The strong smell of bacon frying, and hardwood burning from the fireplace, answered any question of the four of them being in the right place.

Their table sat across from the fire next to a windowless screen, letting in the heavy scent of cedar carried by the cool lake air. When the coffee came it was served with real cream. Thin flapjacks, with a little burnt crust edge, came with real maple syrup, eggs and bacon from a farm around the bend. Another birch was thrown on the fire. The four kids looked out to the lake and at each other. They were from Detroit’s lower east side, and now felt two steps from heaven.

One has to ask, could there be a better mix of things, all at one time, all in one place.

The building still stands today, though no longer an operating Inn, it is part of the national park and looks the same as it did. There is a shipping museum, a blacksmith and a general store nearby, all nicely maintained and designed to remind one of how things used to be. What is missing, however, is the life and spirit of what the Inn was, filled with kids like those four who drove those little roads to get there. ?

Tom Brank is a film producer and writer living and hiking in the Leelanau Peninsula, Mi.