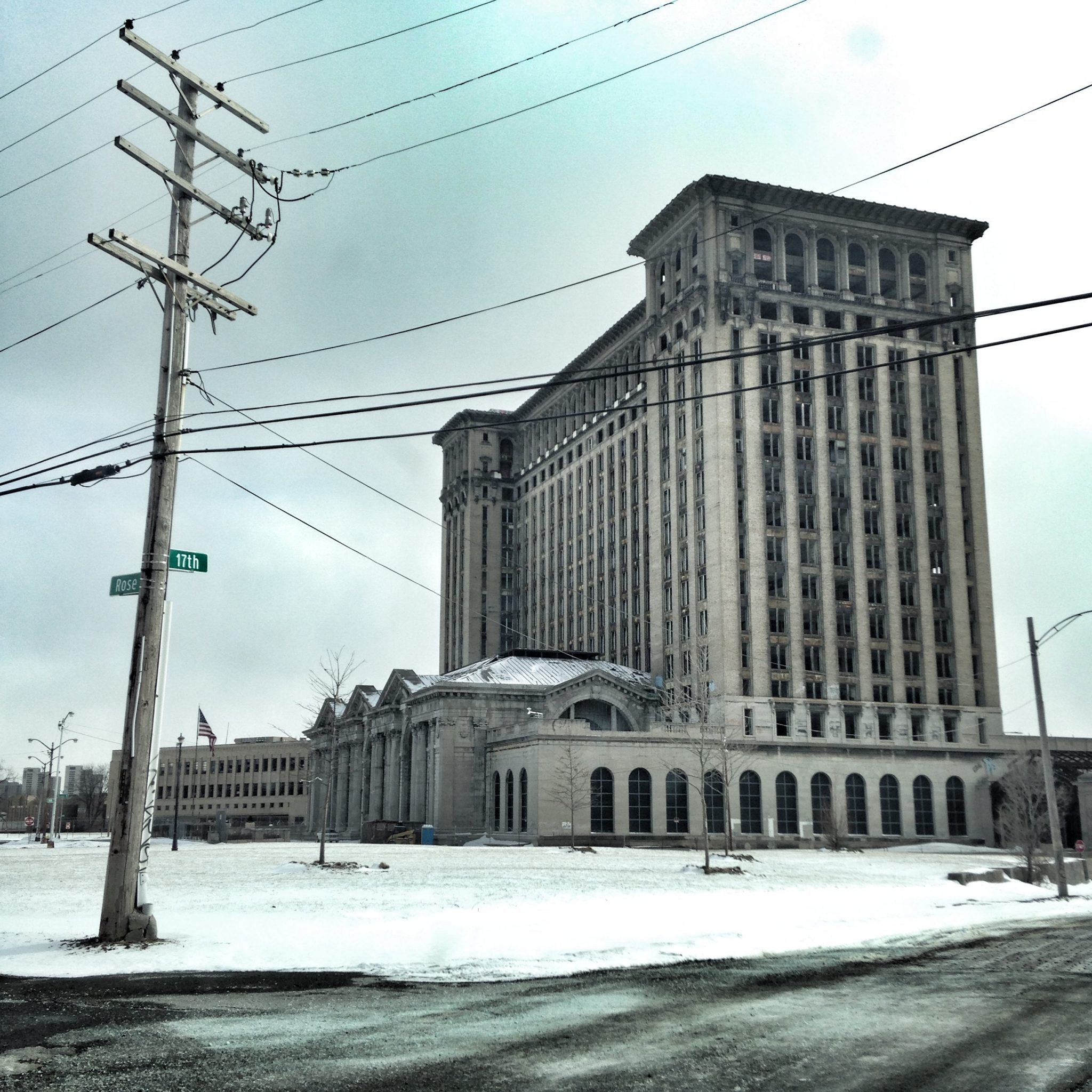 Five years ago, businessman Matty Maroun called for “ideas” regarding the preservation or redevelopment of his Michigan Central Station – the abandoned structure that has sat vacant since 1988. Of course, The Metropolitan’s first response was to “Make it a train station!” When that didn’t take, we embarked on a campaign to turn Michigan Central Train Station into North America’s First Contemporary Ruin.

Completed in 1913, Michigan Central Station moved freight and passengers through the First World War, the Great Depression, and World War II. In the 1940s the depot serviced over four thousand people per day with over three thousand employees working within its frame.

But, passenger traffic slowed, followed by cuts in service, and the iconic building was up for sale in 1965 at a cost of $5 million. Another attempt to sell the structure came in 1967, followed by the close of more shops, businesses, and cuts to more services. Amtrak took over the nation’s passenger railways in 1971 – which should have let us know then the fate of this structure – proceeding to raise the cost of travel, while lessening the experience, and by January, 1988 the last Amtrak pulled from, perhaps, not too surprisingly, an empty station.

Since then, the station has served mainly to remind Detroit of its great history, as well as to provide a medium for artists, photographers, and urban spelunkers to convey our common emotio nal ties with this iconic edifice. In fact, Michigan Central Station is among the most photographed and discussed structures in Detroit, one that has come to embody our heritage.

Designed by Warren & Wetmore and the Reed & Stern firms – the same outfits that designed New York’s Grand Central Terminal – the Michigan depot is of the Beaux-Arts Classical style of architecture, taught at the Ecole des Beaux-Arts in Paris, and is the product of over two-and-a-half centuries of instruction under the authority of the Academie Royale d’architecture (1671-1793) and the Academie des Beaux-Arts (1795 to present), both rooted in the Ancien Regime, linking Michigan Central Station to the Bourbon Dynasty. Fitting, considering Detroit’s French origin.

Therefore, should nothing useful be done with this glorious structure, what higher honor than to declare Michigan Central Station the first contemporary ruin in North America?

In step with world-renowned sites such as the Pyramids at Giza, the Parthenon at Athens, and the Coliseum in Rome, MCS could serve a valuable function by preserving a part of Detroit history. Further, the aforementioned sites demonstrate that a carefully cultivated Ruins program does not only come to symbolize a culture, but also tends to promote tourism, creating a steady stream of revenue year after year.

Despite an uncertain Egypt, brought on in large part by political upheaval and militant violence, the Egyptian Travel Authority reported nearly 10 million tourists for 2015. Though down from 14.7 million in 2010, last year marked an increase from 2014 in travelers visiting the pyramids and other historic sites.

The Association of Greek Tourism Enterprises celebrated a record year in 2015 with nearly 25 million visitors contributing to 19% of the country’s gross domestic product. As recently as November 2015, Greek tourism minister, Elena Kountoura stated at the annual World Travel Market in London that, “The migrant crisis has not had a major impact on tourism, despite the way some media has exaggerated the problem.” Combating both political uncertainty and financial austerity, Greece has apparently been able to draw from the very pool of tourism that, according to Kountoura, sidesteps certain countries associated with terrorism.

Two thousand years after it was completed, Rome’s Coliseum still receives over 4 million tourists per year. Imagine even 10% of those vacationers in need of rooms, transportation, food, drink and entertainment as they make pilgrimage to Michigan Central Station. Frankly, thousands of tourists are already doing so. Certainly, Detroit’s tourism board, combating only the tail end of recession and, perhaps, some negative press, could find a way to capture a larger chunk of this 5.9 billion dollar market.

Clearly, nothing has been done with the train station due to high costs. The amount of money needed to restore MCS must be astronomical. Refurbish, retrofit, codes, green technologies: I can hardly imagine. (In support of this statement, I offer the recently installed low grade windows that stick out like oversized dental veneers). Even then, management must fill the space, a task that has proven difficult since the 40s. And, what of public opinion? Most Detroiters hold the train station close to their hearts. Like an aged grandparent, it has towered empty over Roosevelt Park the whole of our lives, and has become Detroit’s symbol of struggle.

Therefore, The Metropolitan offers the following suggestions to Mr. Maroun in hopes of moving forward. We thank you in advance for considering our proposal.

How To Create A Functional Ruin

Michigan Central Station is a historic piece of architecture. It reminds us of our glorious past and, in the right hands, can be the world’s finest monuments #MichiganCentralStation