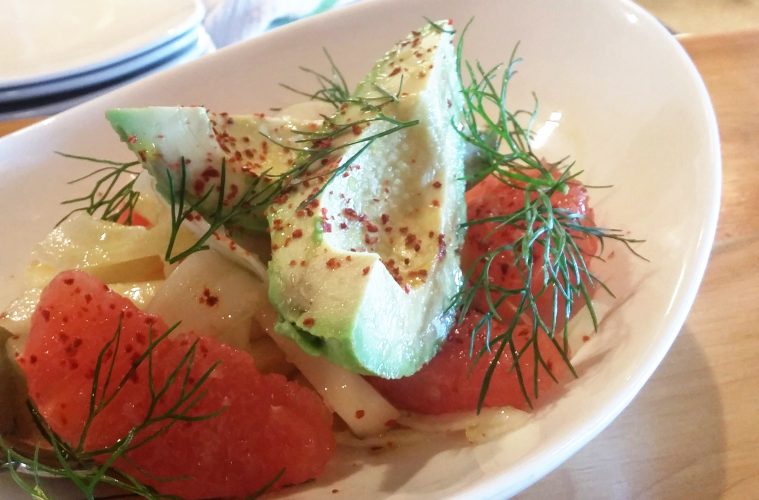 My dining compatriot, Lady K and I often find ourselves at midtown’s Selden Standard – this time, on our twentieth visit. While K situated herself up at the chef counter, she gave me a side glance that could only be interpreted as unimpeachable – as if in overall exclamation that we had made the right choice yet again. In agreement, I gave a silent nod and then set my eyes out to the back patio. Studying the layout, I imagined all of the convivial happenings of people in lust and cheer – over drinks and good food, especially in the coming heat of the summer. Perhaps a bit of embellishment – but envision a space that is both fruitful in taste and elemental in aesthetic – one that livens the most aloof senses.

To get started, we ordered two cups of Anthology Coffee and one of their long standing side vegetables – Roasted Brussels Sprouts. The last I recalled they were broiled and tossed with lemon juice and some sort of infused olive oil with just a slight peppery sensation. But much to our surprise, their classic brassica dish had been situated in a rather different fashion. It still seemed to be broiled, with added lemon juice but with a much more rounded flavor profile that included crisped lentils and yellow raisins that were hydrated in a bright pickle mix.

With a wave of excitement, and per our request, the rest of our food came out – the Grapefruit & Avocado Salad and the Heirloom Beans & Gemelli. Unlike the serving traditions of other fine dining establishments that pace courses, one after another, K and I prefer groupings of plates. It is in this form that we neither wait nor hold expectations and thus are allowed to fully savor and bounce between all of the various sapidities. The Grapefruit & Avocado Salad was lightly dressed, exuberant in taste and presented in quartered fruit fashion. The brighter notes of this salad were due in large part to the freshness of the fennel and mint that were garnished alongside some rather fibrous kohlrabi (German turnip). Altogether, the salad is not to be overlooked.

The Heirloom Beans & Gemelli, delicious as it is, does come with quite a butter warning to our veganites out there. Gemelli is a single strand pasta that has been twisted into a unicorn horn shape. Selden’s version, which seems a bit unwoven, is broader and fluffier than the more narrow versions Lady K has had in Europe. However, do not let such a minor detail misguide intent, as the variant shape acts as a natural beaker that holds all the flavors. For myself, when I elect heavier cheesy pasta, I almost always go for the accompaniment of veggies, which in this case took the form of the cruciferous greens rapini or broccoletti and some rather tender calypso beans (hybrid kidney bean). To both K and I, all of this jargon exemplified one vital thing – the lusciousness of Selden Standard’s culinary expertise is still very, very strong.