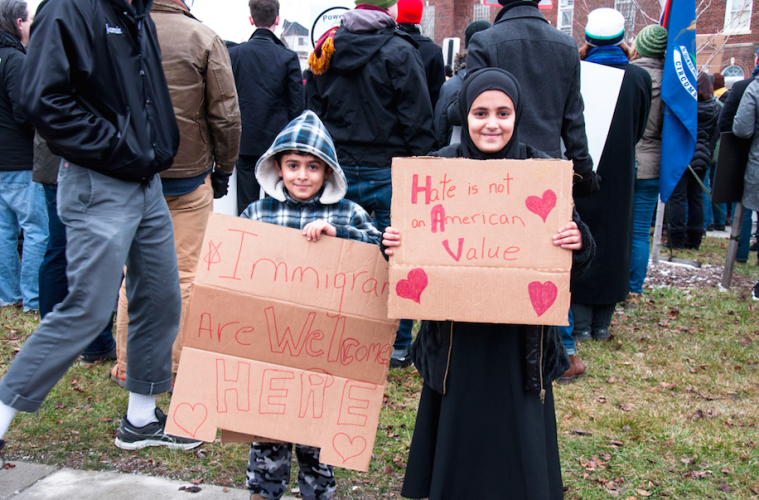 At 4:42 PM, pen down, order collected, Trump paused for a moment. Perhaps his thought process, something that has alluded political pundits and scholars alike for months, looked something like the last-minute weighing in of his “America First” campaign; promising protection from the backlash of liberalism and the international community. Or, perhaps, he was wondering what could be the true extent of his executive power.

The central goal of the far-reaching Executive Order is to evaluate and strengthen pre-existing immigration standards. The Order further outlined a temporary suspension of entry for non-US citizens coming into the country from seven predominantly muslim nations: Syria, Iraq , Iran , Yemen, Somalia, Sudan, and Libya. Nowhere in the Order do the words “Muslim”, “Islam”, “ban”, or “radical Islamic terrorism” appear. The purpose of the Order was outlined in Section One:

“In order to protect Americans, the United States must ensure that those admitted to this country do not bear hostile attitudes toward it and its founding principles. The United States cannot, and should not, admit those who do not support the Constitution, or those who would place violent ideologies over American law.” – President Donald Trump

The temporary suspension of the Refugee Admissions Program is to come to an end in 120 days, but according to Section Five C, upon its reinstatement only 50,000 refugees are to be accepted back in country.

The Order directly cites the attacks on 9/11 and the post-9/11 visa-issuance processes and policies; the increased global tumult in the Middle East, and the increased radicalization across the globe. Finally, it draws the conclusion for the immediate need of strong domestic national security.

Interestingly, the 9/11 Review Commission’s Final Report, which was widely criticized for lacking in evidence and, perhaps, even withholding some, determined that 15 of the 19 hijackers were from Saudi Arabia. Of the seven targeted countries in Trump’s order Saudi Arabia is not among them. Regardless, the January 27th order put forth for many an exciting, horrific and tearful series of events that continue to shake the foundations of which many American’s believe this nation is built. 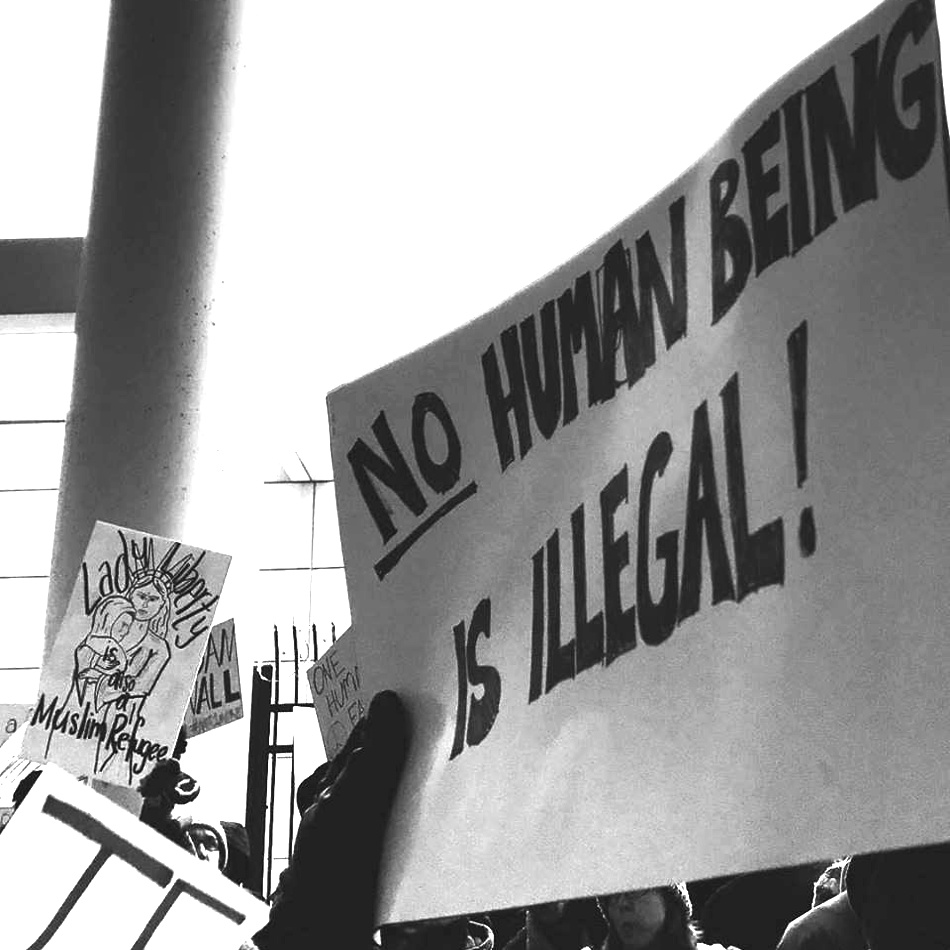 2:00AM, hours after the signing of Trump’s Executive Order, the Islamic Center of Victoria, Texas went up in flames.

Almost immediately, twitter was filled with questions for @realDonaldTrump – where was the President’s press statement on the fire and why was the fire not being recorded as a hate crime or an act of domestic terrorism? The White House and local authorities responded with silence. Investigators recently concluded that the cause of the fire was an intentional act of arson. However, the identity and motivation of the suspect(s) are still under investigation. The Texas mosque,  the site of a burglary only one week earlier, had also been the victim of vandalism in 2013.

The morning after the fire, when members of the mosque conducted their first call to worship in front of the remains, was met with an outpouring of support from local, national, and international communities, comprised of persons that transcended cultural and denominational differences.

BACKGROUND: UNIVERSITY OF MICHIGAN AND WAYNE STATE UNIVERSITY RESPOND TO THE ORDER

Saturday morning, University of Michigan’s President Mark Schlissel and Wayne State University’s President M. Roy Wilson both released widely distributed press statements that addressed the impact of the Executive Order on their students, faculty and staff. Both universities have a high percentage of students, faculty and staff that would be adversely impacted by the Order.

Both Schlissel and Wilson declared their support for their student bodies regardless of origin, religious affiliation, or immigration status; both decried hate crimes on campus; both stated that the university would not partner with outside law enforcement or release sensitive student or faculty information. But there was one important caveat: both universities agreed to protect private information and not to partner with outside law enforcement “unless required to do so by law”.

President Schlissel’s statement made its rounds on social media and was applauded by avid opponents of  #muslimban. President Wilson’s statement, by contrast, met with trepidation.

While Schlissel’s caveat was, perhaps, lost in a list of bullet points, President Wilson’s caveat expanded via an additional release in reaction to a campus-wide petition for the establishment of a “sanctuary campus” at Wayne State. An ambiguous term that still lacks a concrete definition, “sanctuary campus” is generally accepted as a college or university that adopts policies to protect the identities and immigration statuses of undocumented students.

Not one university in Michigan has chosen to adopt the title, with only a few choosing to respond to the Order through public press statements. In the face of HB 4105, a pending bill in the Michigan House of Representatives aimed at prohibiting the establishment of sanctuary city policies, Schlissel and Wilson’s response to the Order, and to the demands of both campuses, have raised concern over their universities acquiring, as Wilson wrote in his press release, “unnecessary political and financial risk[s].” 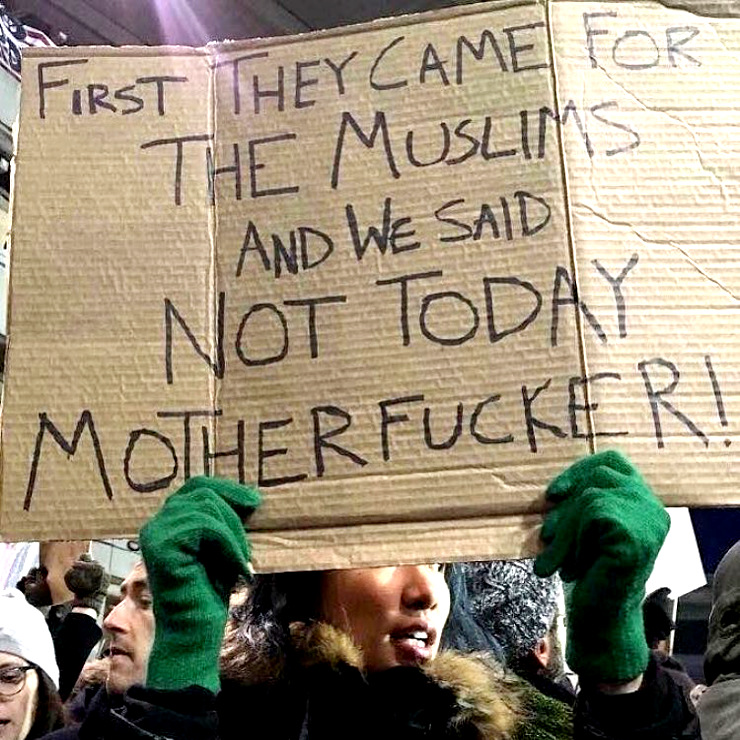 Saturday afternoon, the Darweesh v. Trump class action lawsuit is rolled out by the American Civil Liberties Union (ACLU) in defense of two Iraqi plaintiffs: Hameed Khalid Darweesh and Haider Sameer Abdulkhaleq Alshawi. The ACLU contended that Darweesh, traveling on an Iraqi special Immigrant Visa, and Alshawi, traveling on a Follow to Join Visa, were unlawfully detained at the John F. Kennedy airport in New York City. The lawsuit argued Trump’s Order challenged two constitutional clauses: Due Process (which states no person should be “deprived of life, liberty, or property without due process of law”) and Equal Protection (which states that laws shall be equitable, nondiscriminatory, and have “rational basis”).

Both Mr. Darweesh and Mr. Alshawi were detained directly following the Order and the ACLU’s request for a class-wide emergency stay of removal was granted soon thereafter. The constitutionality of the Order, on the other hand, still remains a hotly debated topic.

Within 24 hours of the Order taking effect, and with the growing outcry of the ban, a rookie Obama-era judge from New York, Judge Ann M. Donnelly, issued an immediate block to the deportation of all travelers from the seven affected countries who had found themselves abruptly detained by customs shortly after arriving in the States.

Unlike many other dissents by the Department of Justice and federal district judges – this decision was couriered by federal marshals:

“ IT IS FURTHER ORDERED that to assure compliance with the Court’s order, the Court directs service of this Order upon the United States Marshal for the Eastern District of New York, and further directs the United States Marshal Service to take those actions deemed necessary to enforce the provisions and prohibitions set forth in this Order. ” – Judge Ann M. Donnelly

It is an unusual circumstance to call upon court law enforcement to enforce other departments of law enforcement to comply with an order without evidence or previous instance of noncompliance. In other words, Judge Ann M. Donnelly’s actions displayed little confidence that U.S. customs officials would immediately comply with her order. While, many respects in Judge Donnelly’s actions illustrate the checks and balances that exist within the system, most orders come by notification with expectation of compliance. By not following such a procedure, Judge Donnelly’s actions suggests an unsettling power struggle within the most intricate and vital mechanisms of our current government. 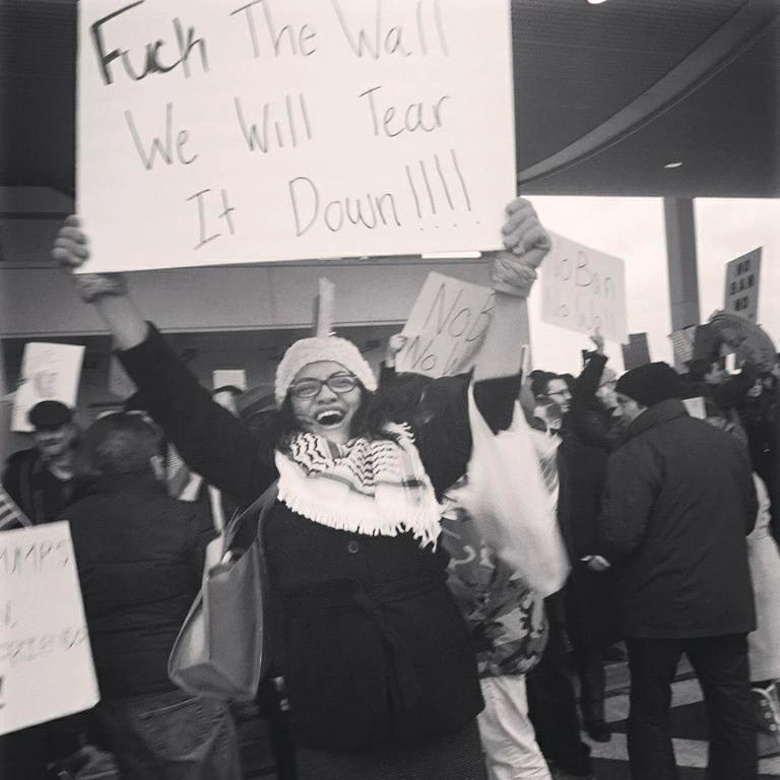 The second action against the Order issued out of Boston at 1:51AM and placed a 7 day hold on the President’s EO. It was followed by separate Orders from judges in California, Washington and Michigan only days later, and demonstrates the ability of District magistrates and judges to directly confront an Executive Order.

Dissension by other district judges, including Judge Nathaniel Gorton out of Boston, who has preliminarily defended the faith-neutrality of the order, will now stretch the legal battle. The immediate action by the courts, however, particularly where claimants of  habeas corpus are concerned, is indeed a sign that there is still a judicial system in place to defend  the rights of those in America.

As the Trump administration released a press statement defending the Order as an action taken in the name of national security, protestors across the country chanted “No hate; no fear; refugees are welcome here” and “Let them in.”

United through Twitter, Instagram and Facebook, Amnesty International, Women’s March on Washington and the ACLU mobilized tens of thousands across the country under the hashtag #muslimban.

National action and solidarity with the movement via social media did not stop at airports. Uber, the global ride-sharing company, suffered  losses over 200,000 accounts within a 48-hour period as the #DeleteUber movement grew due to the company’s perceived attempts to profit off an immigration strike by New York Taxi Workers Alliance. Uber’s CEO, Travis Kalanick, stepped down from his position on Trump’s economic advisory council the following week as a result of the online boycott and from dissatisfaction with his ties to Trump’s administration. 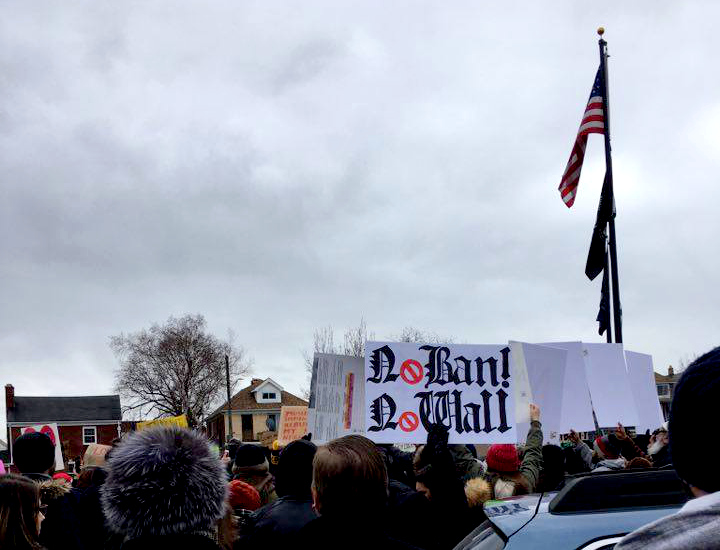 By Sunday morning social media was abuzz over the events beginning with the signing of the Order the previous Friday. On nearly every platform a movement to “rise up” went beyond viral into IRL. In Metro-Detroit, State Representatives, political action networks and the Women’s March spread a simple correspondence – when and where.

By 2:00PM a growing congregation of protesters in Hamtramck, organized under the name Emergency Protest Hamtramck: We Stand In Solidarity With Muslims was well under way, consisting of hundreds of people.

Around 3:30PM the DTW: Emergency Protest Against Muslim Ban had begun to take form at the Detroit Metro Airport, with several thousands of protesters filling the baggage claims and entrance and exit points.

While previous movements have relied on social media to organize and amplify their voice – #blacklivesmatter, #occupywallstreet  #womensmarch – the #muslimban, or #muslimlivesmatter, executed tangible outcomes with almost no planning outside of the mention of Time and Place, and physically bottlenecked some of the nation’s biggest airports.

Over the weekend, Americans, celebrities, corporations and people from around the world donated over $24 Million to the ACLU, six times more than what the American Civil Liberties Union raises in an entire year. Since Trump has taken office, the ACLU has reported a high traffic website crash, raised annual membership by nearly 50%, received over $47 million in donations, and hired over 200 new employees. The Texas mosque that was burned to the ground had itself accrued over $700,000 in donations from its GoFundMe page. 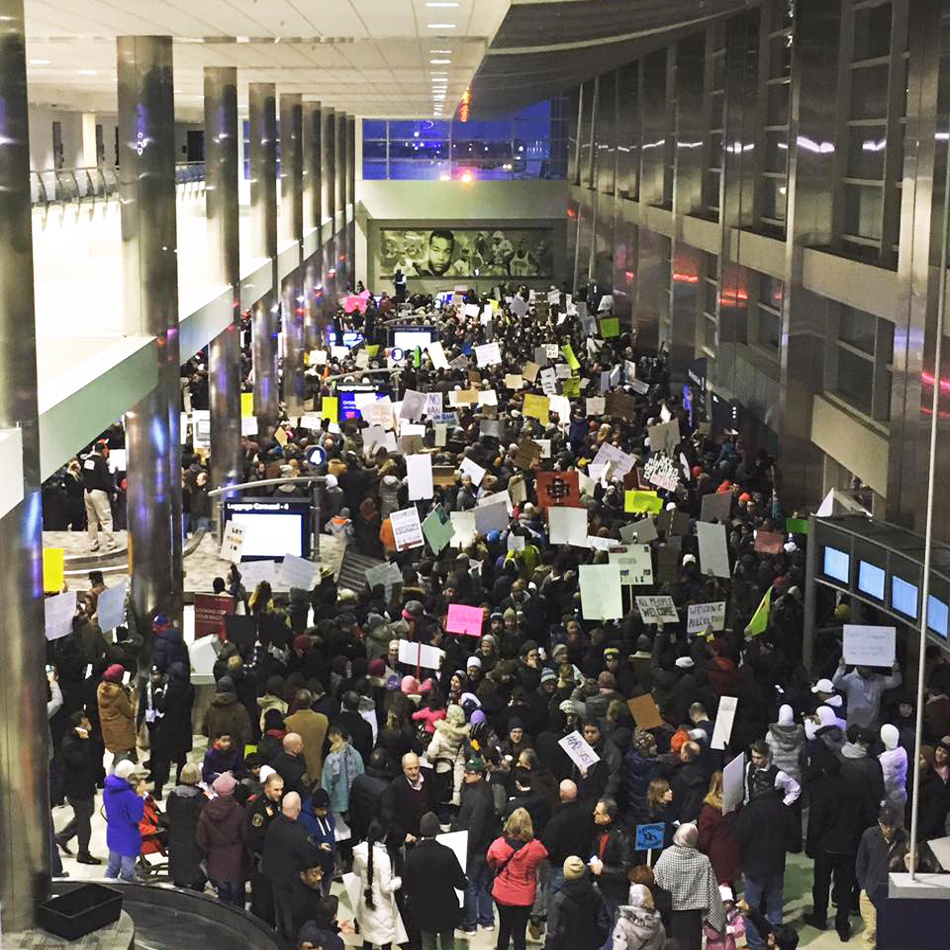 The events of the #muslimban protest weekend is symbolic of a collective voice and unified defiance. Signatory of this was Acting Attorney General, Sally Yates issuance of a department-wide memo that states the DOJ will not support or defend Trump’s Order. In her stand against the Order Yates was fired. Her act, however, planted another seed in a forest of seeds that is starting to sprout.

Leaders all over the country, including many in metropolitan Detroit, such as former Rep. Rashida Tlaib, Rep. Stephanie Chang, Rep. Darrin Camilleri, Rep. Abdullah Hammoud, Rep. Jim Ellison and Rep. Erika Geiss participated in the protests. The right to oppose and in some cases to aggressively defy what one believes to be attacks against personal freedom, or to secure a nation’s collective interests, has once again taken root in towns and cities across this land.

The question is; to what end? 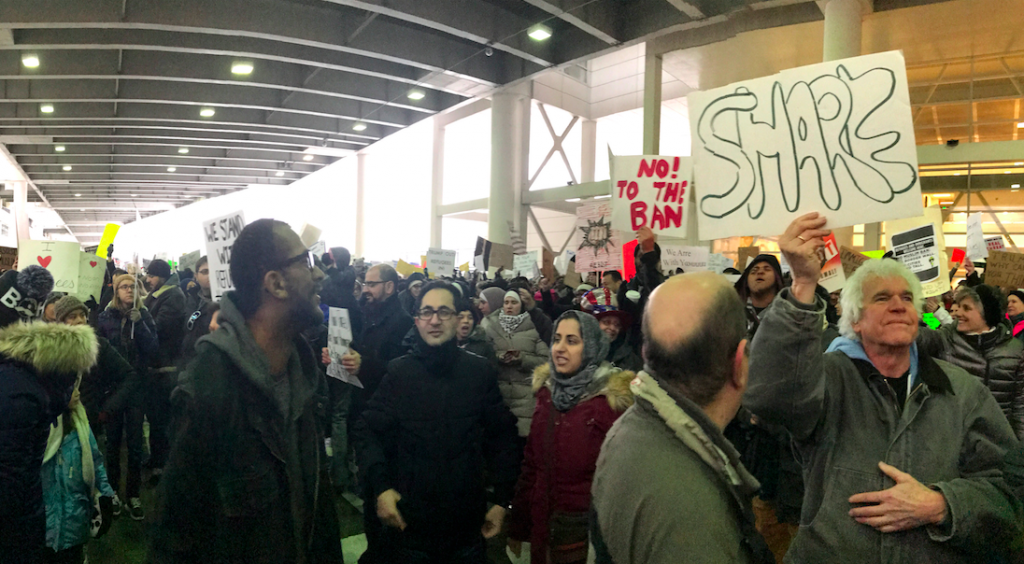 The people of Metro-Detroit and the State of Michigan stood up and joined in with voices of dissent from around the country. This 48 hour timeline showcases the power of the people when it decides to mobilize. For those closely following the progression of events surrounding Trump’s Order, here is a list of Action Steps to stay involved and strengthen your voice as a citizen in the Metro Detroit community:

End of Part I