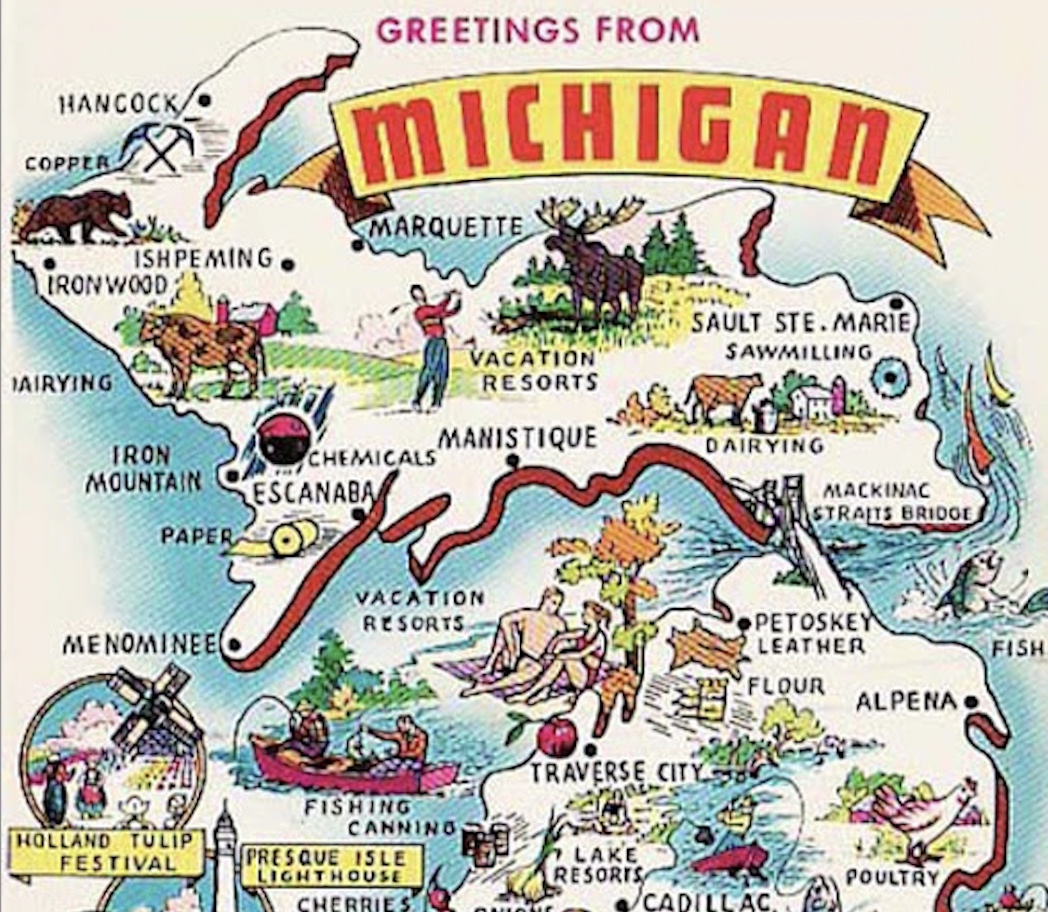 A Story by Harry Onickel

When I was a kid growing up in Livonia, “up north” was an abstract concept. I wasn’t sure what it meant, except as a place that other families went to on vacation. I had no sense of place or direction. On my dad’s vacations, we took day trips to Belle Isle, the Detroit Zoo, and the some of the long-gone Irish Hills tourist traps like Frontier City, Prehistoric Forest, and Mystery Hill. We had good times. We didn’t know enough to demand lakes, boat rides, and hotel pools. We weren’t adventurous enough to set up a campsite at a state park. Local attractions were good enough for us until my twelfth summer when we took a road trip to New Jersey. We’ll talk about that another time. For now, we’re going hang around Michigan.

I’m not sure if this is geographically accurate, but according to my mental map, Up North begins once we are past Bay City on I-75. That’s where the trees appear thicker, the air smells fresher, and the heat, even if it is a hot summer day, is not as oppressive. Freeway exits have more distance between them, and unless it’s a busy Up North weekend, there seems to be less traffic.

While the west side of Up North is the popular (and more expensive) side, my wife and I, when the kids were little, began occasionally vacationing at Pine Ridge Lodge, a bed and breakfast up in Lewiston, on the less traveled, more rustic, east side. We still had lots of fun things to do whether we were there during winter or summer, like ice skating, sledding, canoeing, fishing, and sight-seeing. Sometimes we had to travel far to do things, but driving country roads for long distances is less stressful than fighting Detroit area, stoplight filled, bumper to bumper, surrounded by idiots traffic. Even city driving Up North during summer tourist season and facing tourist drivers doesn’t seem as frustrating. One does have to watch for deer, and there was the one time I had to take the shoulder due to an idiot coming at me in my lane because he thought passing on a two-lane road while rounding a curve was a good idea.

From Lewiston, one winter trip, we drove to Gaylord and went bowling because there wasn’t enough snow for outdoor activities. Driving further west from Gaylord, we traveled all the way to the west coast (of Michigan) to tour light houses and explore the sand dunes. Another day we drove up to St. Ignace so that we could take the kids to the U.P. We had the opposite problem in 2015, when Lewiston received too much snow and we had to cancel our trip because our Chevy Cobalt would not have made it through the post-blizzard mess, which included 20 inches of uncleared snow and downed trees.

Since the kids are grown and have abandoned us, our trips have been mainly to the very touristy, bright and shiny, west side. We’ve been up to visit family on Walloon Lake a few times.

My niece got married in Petosky one summer, and we made a vacation of it. We rented an Airbnb and were joined by the kids and by my mother-in-law. We explored Boyne City, Walloon Lake, and various breakfast places out in the middle of somewhere.

For our 30th wedding anniversary, I planned a romantic weekend getaway at a charming bed and breakfast in Belleaire complete with an anniversary cake. We had a lovely, sunny day wandering downtown Traverse City and a fancy dinner in Charlevoix. It was late November, so we had most of Up North to ourselves.

This latest trip, my wife and I went up to visit Mark and Michelle near Cheboygan, which is within that “no man’s land” between east and west. They invited us to visit their place near Mullett Lake, and they were gracious enough to put us up in their camper, stationed at the campground across the road. We just followed the chicken to get there.

While there, we sampled the sights and sounds of Cheboygan, enjoyed the local fare, and traveled far and wide to other exciting Up North spots. (Note: No matter what else you do, or where else you eat, have some pie from Libby’s Downtown.) At least it was exciting for us. We were able to do things that we never get to do in Ferndale. We went boating and swimming on Mullett Lake. We took a boat ride on Walloon Lake. We had a tour of Gary’s art-filled barn. We rode the ferry to Mackinac Island. We dodged horse poop.

Going to Mackinac Island was one of those things my wife and I had talked about doing for years but hadn’t yet done. Everyone should go to Mackinac at least once in their life. Be ready to walk, and make sure you drink plenty of water. We did a lot of walking, but we also had a nice lunch and some drinks. There are a lot of fine establishments to choose from. Shopping is also available, but from looking in windows and doorways, it looked like the shops sold mostly touristy-type stuff. There is a bookstore. Of course, I went in. One should always support bookstores.

We walked up to the Grand Hotel, but we did not enter. That would have cost $10.00, and our clothing; shorts and t-shirts, did not conform to the dress code. If my dreams of vast wealth ever come true, we will not only enter, but we will rent a room and eat some meals in their restaurants. Judging from their online menus, the food looks very tasty. We will, of course, be dressed appropriately. There are other places to stay on the island, and they looked very nice from the outside, but none of them are Grand.

There is much more to the island than I thought. I had no idea there were so many places to stay besides the Grand Hotel, or that there were so many restaurants, bars, ice cream parlors, and fudge shops. We didn’t buy any fudge. I’ve always gotten my Mackinac Island fudge at the Michigan State Fair, and since the fair is gone, I no longer need fudge. I didn’t know people actually live on the island year round or that there are so many hiking and biking trails, including one that goes all the way around the island. I guess I hadn’t been paying attention. We walked until we were exhausted. Perhaps we shall rent bikes next time, and really explore the island.

The only place that seemed to have more fudge shops than Mackinac Island was Mackinaw City. We passed them all by, because no offense to Mackinaw City, but the only thing we came to do there was park the car and hop on the Mackinac Island ferry. I’m sure there are many things to do in Mackinaw City and many fine places to eat. We just didn’t bother. There were lots of other tourists clogging the streets, so Mackinaw City didn’t need us anyway.

We even made it into the U.P. As much as Up North feels different from southern Michigan, the U.P. has an even more primal feel. It felt like we were truly in the vast, untamed wilderness, back in the days prior to Michigan becoming a state, when the most advanced form of travel was a cart being pulled by horses, and people hunted for their food with bow and arrow or with a flintlock musket – except that we were able to drive on modern roads and stop for gas when we needed to, plus there were the road signs, snowmobile trails, cities, restaurants, motels, coffee shops, and Gustafson’s, where we picked up some very tasty smoked fish and jerky. We weren’t in the U.P. very long. We’d gone up specifically to go to Gustafson’s. The trip was worth it. Not only did we get some delicious edible souvenirs, but my wife picked up a Gustafson’s sweatshirt and a hat.

Sadly, after four days of Up North enjoyment, we had to leave and return home. I’m not sure why, but that seems to happen every trip we take. We had spent the previous night sitting around a campfire with Mark and Michelle and some of their neighbors. That was fun. I’ve always found it interesting that people can sit around a fire and watch the fire like we’re watching TV. In some ways though, it’s better than TV. Maybe it’s because we can talk to each other without losing the plot or missing any dialogue. Or maybe it’s because there are no commercials or cable bills. I will have to do more research on this topic.

That last morning, we packed, loaded the car, dropped off the camper keys, made our final good-byes, and headed off for breakfast before heading south on I-75. Our final Up North meal was at Café Noka in Topinabee. They claim to have the world’s best pancakes, and pancakes had been on my mind since our breakfast a few days earlier at Libby’s. A woman at another table had ordered pancakes along with some other food. The pancakes were huge (not quite as big as the table, but close) and fluffy, and even though she ended up taking them home completely uneaten, they remained stuck in my head. So, it had to be pancakes to sustain me during the long drive home.

Supply chain issues continue to vex us all, no matter where we live. Noka’s hadn’t been able to get all of the necessary pancake ingredients for a couple of weeks, so my pancake dreams were shattered. The breakfast I ended up ordering was fine, but I wasn’t really satisfied until I made pancakes at home a few days later, filled with walnuts and backyard raspberries. I don’t know of any restaurants that offer raspberry pancakes, so I was probably better off making them at home anyway. That’s kind of an anticlimactic ending to our Up North adventure, but there is something to be said for a good stack of homemade pancakes with butter and real maple syrup.