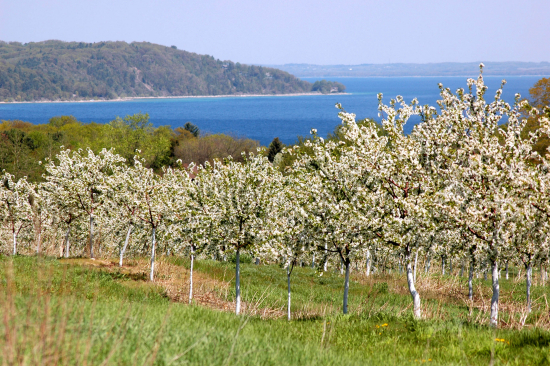 The annual May blossoming of the cherry trees in Traverse City is one of America’s most impressive floral displays. Ironically, it’s a show that few outsiders ever see.

“It’s one of our big secrets,” says Sarah West of the Chateau Chantal, a 65-acre vineyard and winery estate on the nearby Old Mission Peninsula, in the heart of Traverse City’s fruit-growing country.

Cherries are deeply woven into the fabric of everyday life in Traverse City, which bills itself as the “Cherry Capital of the World.” (Quite rightly, since 75 percent of the worlds tart cherries – the kind used in pies, pastries and jams – are produced within a few miles of this charming resort town.)

Most Traverse City cherries are grown on two peninsulas that lie just to the north of the city: the Leelanau Peninsula, a roughly triangular land mass along the Lake Michigan shore, and the narrower Old Mission Peninsula, which runs for 20 miles up the center of Grand Traverse Bay. Renowned for their natural beauty, these two peninsulas are bathed by deep glacial lakes and bays that create an unusually mild “microclimate” with cool springs, dry summers and long warm autumns that extend the growing season well into October.

This anomaly was discovered by the Rev. Peter Dougherty, a missionary to the local Ottawa and Chippewa Indians who planted a cherry tree at his Old Mission settlement in 1852. No one expected the tree to survive so far north, but it did – and it wasn’t long before arriving settlers began planting cherries, peaches, apples and apricots of their own.

First to bloom are the sweet cherries – about 600,000 of them. Then, within a few days they’re joined by 2 million tart cherry trees. Unlike the ornamental cherries familiar to visitors to Washington D.C., these blossoms are pure white, though from a distance some trees seem to carry hints of pink from their red twigs, while others take on a touch of light green from the emerging l

eaves around them. The color intensifies within a week, however, when light pink blossoms of 670,000 apple trees suddenly appear.

Unfortunately, the mild microclimate that makes this all possible doesn’t guarantee that the cherry bloom will happen at the same time every year. There are wide variations on onset and duration of the blossom from one season to the next – as early as May 5 and as late as May 28 — and even from one orchard to the next. Generally speaking, areas farthest away from deep water tend to bloom earlier and finish more quickly, than those along the coast – and often the difference can be as much as a week.

“Typically, the areas around Acme and Williamsburg are usually way ahead of the orchards that are closer to the water, and the tip of the Old Mission Peninsula starts much later than the base,” says Bill Klein of the Northwest Michigan Horticultural Research Station near Sutton’s Bay.

Such a dramatic display calls for celebration, and Traverse City residents have always observed the onset of the spring bloom with appropriate festivities. Early celebrations were a rough-and-ready business centered around the farm community — an annual “blessing of the blossoms” performed by local clergy, followed by an informal potluck at the nearby church.

But over the past 15 years, the rapid development of Traverse City’s wine industry has brought new spring visitors to the area, and the area’s wineries have begun promoting the blossom season as a time to enjoy spring’s distinctive culinary treasures – tender asparagus shoots, sweet strawberries, and the delectable morel mushrooms gathered in the local forests. Accompanied, of course, by the region’s distinctively fruity wines.

Chateau Chantal was the first winery to widen the popularity of the celebration by collaborating with other Old Mission Peninsula vineyards and restaurants on an event called Blossom Days. Today the festival includes barrel tasting of reserve vintages from the peninsula’s five wineries and special menu offerings at local restaurants, but it still retains some of its original religious flavor.

“It’s really our way of getting the growing season off to a good start by asking for a good year and a plentiful harvest,” she says. “But what’s nice for the visitors is that this is one of the few times when the winemakers have the time to hang out and talk with them in the cellars and show them a little of what they do.”

It wasn’t long before the wineries and restaurants of the Leelanau Peninsula created their own spring blossom event. Called the “Spring Sip & Savor,” it mixes “new release” wine tasting and gourmet meals at 13 of the peninsula’s wineries.

But for many visitors, the best part of the season is simply getting out and driving along the winding peninsula roads to see the hundreds of flowering trees set against the green grass, the yellow dandelions and the deep blue waters of the lake.